Armstrong and Te'o's apologies could use some performance enhancement 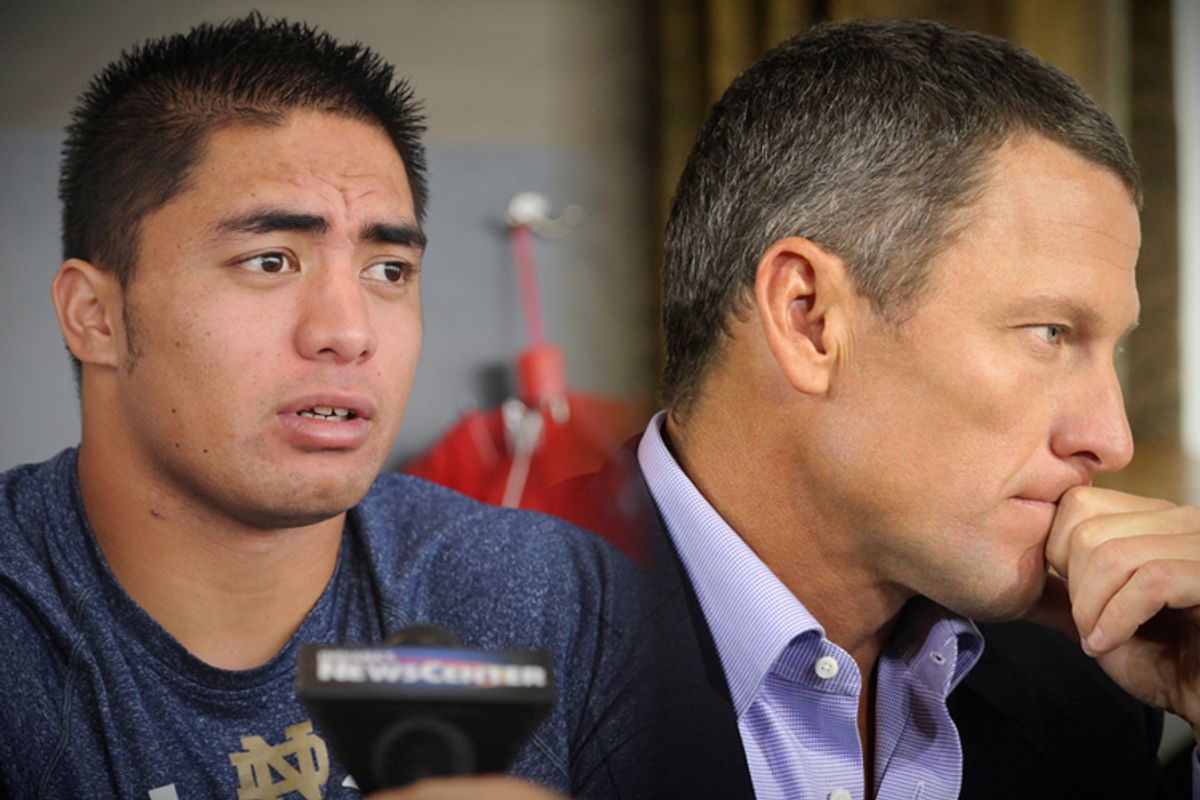 This week, two very different athletes came under intense, worldwide scrutiny for their elaborate deceptions. And in light of a deluge of unassailable evidence, Lance Armstrong and Manti Te’o faced different media firestorms and had to hold themselves accountable. Your mom said it best: Are they sorry they did it, or are they just sorry they got caught? But neither Armstrong nor Te'o seems sorry at all.

At first glance, Armstrong and Te'o would appear to have little in common beyond professional athleticism and a penchant for elaborate ruses. In an interview with our national confessor in chief Oprah Winfrey, the 41-year-old Armstrong acknowledged that he'd been doping up a storm throughout his professional cycling career, including his seven winning Tour de France races. Meanwhile, after a sensational exposé in Deadspin, Notre Dame linebacker Te'o admitted that his girlfriend Lennay Kekua, who'd tragically died of leukemia in September, had never existed at all. And it's in the way that both men have handled their deceptions that another commonality has emerged – neither one will ever win a prize for World's Greatest Apologizer.

Armstrong is undoubtedly by far a worse offender. He spent years vehemently denying that he was using performance-enhancing drugs, suing the friends and associates who said otherwise, and racking up championships and lucrative endorsement deals along the way. Yet it had all been, in his words now, "one big lie." He had been a "bully" who needed "control" — that he copped to. But as Willa Paskin notes, "he was here to say sorry, without ever saying 'I'm sorry.'" He told Winfrey, "I will spend the rest of my life ... trying to earn back trust and apologize to people" — which is a fine start, but not the same as actually saying, "I apologize."

The second part of Armstrong's interview with Winfrey airs Friday, so there may be a more nuanced and remorseful Armstrong yet to come -- though based on Winfrey's assertion earlier this week that Armstrong didn't "come clean in the manner I expected," I recommend not holding your breath. In the Wall Street Journal, Josh Kador gives Armstrong low marks for his performance so far, noting that while perhaps no mea culpa could make up for "the multitude of lies, ruthless attacks, personal betrayals, and abuse of power," the cyclist's relentless defensiveness and need to explain his actions demonstrate he's "not quite ready to do the heavy lifting of apology."

Te'o's still-developing narrative, on the other hand, involves no bullying, no cheating. He asserts that he is the victim of "someone's sick joke and constant lies," and he may be telling the truth. But he also used to refer to her as "the most beautiful girl I've ever met" -- a fiction he maintained even after he learned she wasn't real in early December. At the Heisman Trophy presentation, for example, he spoke of how "my girlfriend passed away" and shared movingly that "I lost both my grandparents and my girlfriend to cancer." Yet the closest he's come so far to expressing regret over perpetuating that fictional girlfriend has been an acknowledgment that "I obviously should have been much more cautious."

The problem for both Armstrong and Te'o is that as public figures who perpetuated whoppers of varying degrees of severity, they are now expected to do a media shame walk. But you can't make somebody feel genuine contrition just because he should. He can offer some crocodile tears or an insincere ninth step, but there's not much value in that. Armstrong can – and must – now begin the long and difficult process of making amends for damage he's caused in his relentless devotion to his own false image. Te'o, meanwhile, will likely easily live down his embarrassment, while his role in perpetuating it will fade away. The extent of either's own accountability may never fully occur to them.

As Marjorie Ingall, co-creator of the Sorrywatch blog, tells Salon, "I'm guessing Lance doesn't do humility, forbearance or true remorse. I imagine he will do reparations that involve money or throwing other cyclists to the lions, but you tell me if that's really reparation." And, she notes, "A good apology has four elements: acknowledgement of the offense; explanation; 'various attitudes and behaviors including remorse, shame, humility, and sincerity'; and reparations … We agree with this, with a little elaboration. Use the words I'M SORRY -- you'd be surprised how many people don't." Armstrong didn't. T'eo didn't.

It'd be nice if our sports heroes had the character that remorse requires. Armstrong, in particular, has denied his fans and spectators the opportunity to feel compassion for him, a feeling that was still possible when he was painting himself as the victim of a calculated smear campaign. There's no chance now for empathy, because he still seems to lack empathy for the people he's wronged. And whatever he may do to set right his years of bad behavior, it's mitigated by the hollow sense that it's all empty gesture, that of all the things he accomplished in his life, he still doesn't understand the meaning of one small word. And though neither he nor Te'o needs our forgiveness, there remains the nagging disappointment among fans, the kind that comes from never even having the chance to give it.