Can Galliano be forgiven?

After an anti-Semitic meltdown, the bad boy designer returns — with an unlikely ally 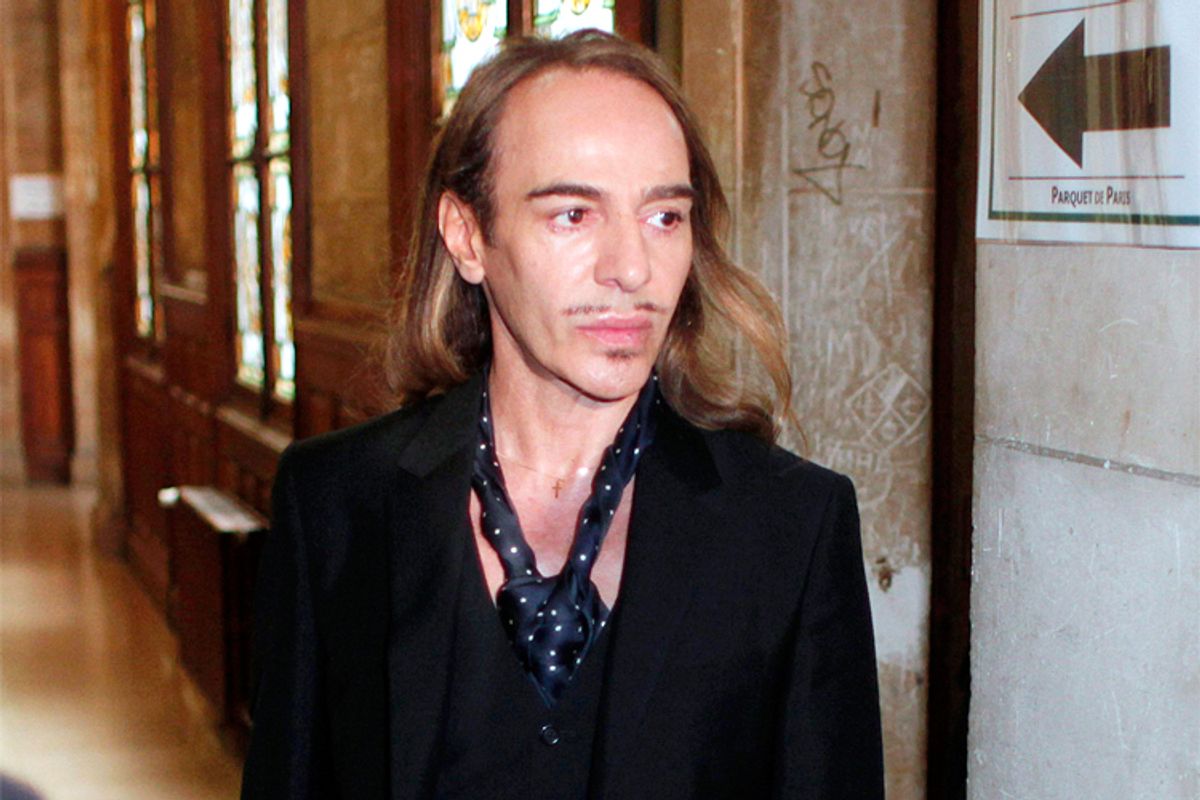 Gosh, it seems like only yesterday John Galliano was swanning around Paris, arguing with restaurant patrons about their "dirty Jew faces" and announcing, "I love Hitler." But it's been almost two full years since the flamboyant British clothing designer had a meltdown of such epic proportions that cost him his job at Dior, and got him publicly slammed by his house's then-muse Natalie Portman, and then found guilty of anti-Semitic behavior in a French court and fined for it. Now, he's returning to fashion with a new temporary residency with Oscar de la Renta – and a blessing from a surprising source.

Galliano has a kept a low profile since his March 2011 fall from grace. For his return engagement, he will be assisting in de la Renta's New York offices over the next few weeks, helping the house prepare for Fashion Week. It's an apprentice-like comedown from his days as a top dog designer, but a major step toward a career reboot. "He has worked long and hard on his recovery," says de la Renta, "and I am happy to give him the opportunity to reimmerse himself in the world of fashion and reacclimate in an environment where he has been so creative."

From a purely fashion-watching standpoint, the collaboration between two such gloriously baroque designers as Galliano and de la Renta promises to be one of the highlights of the spring shows. But from a redemptive one, the question arises of whether hard work alone is enough to secure a return to grace. Promisingly, Galliano has something else going for him: an understanding of what he did wrong in the past. He told WWD on Friday, "I am an alcoholic. I have been in recovery for the past two years. Several years prior to my sobriety, I descended into the madness of the disease. I said and did things which hurt others, especially members of the Jewish community. I have expressed my sorrow privately and publicly for the pain which I caused, and I continue to do so. I remain committed to making amends to those I have hurt … I am grateful to Oscar beyond words for inviting me to spend time with him in the familiar surroundings of a design studio. His support and faith in me is humbling." Now THAT is an apology. Contrite, self-aware and ultimately grateful. Are you paying attention, Lance?

But what makes Galliano's return truly unique isn't just his candor -- any celebrity fresh out of rehab can pull that off. It's that he's doing it with the support of the Anti-Defamation League. ADL national director Abraham H. Foxman said Friday, "We believe that individuals can change their hearts and minds as long as they demonstrate true contrition. Mr. Galliano has worked arduously in changing his worldview and dedicated a significant amount of time to researching, reading and learning about the evils of anti-Semitism and bigotry. Along his journey to recovery he met with us on numerous occasions. He has accepted full responsibility for his previous remarks and understands that hurtful comments have no place in our society."

But what is right at the moment of punishment isn't necessarily right forever. Galliano can't unsay or undo the gross, offensive things that happened two years ago. He's paid a cost, financially, professionally and personally. Whether that debt is now paid off will be up to magazine editors and companies that choose to hire him and customers who can afford his elaborate designs. Yet as de la Renta says, "Everyone in life deserves a second chance. I think that life is about forgiving and helping people." And that's a sentiment the ADL obviously shares, in publicly wiping Galliano's slate clean. That's a huge and moving gesture. It's a message that says that no matter how far down a person falls; he can make his way back. He can ask for forgiveness, and he can get it. And if Galliano never does anything else with his public career, that alone is an accomplishment of great beauty.