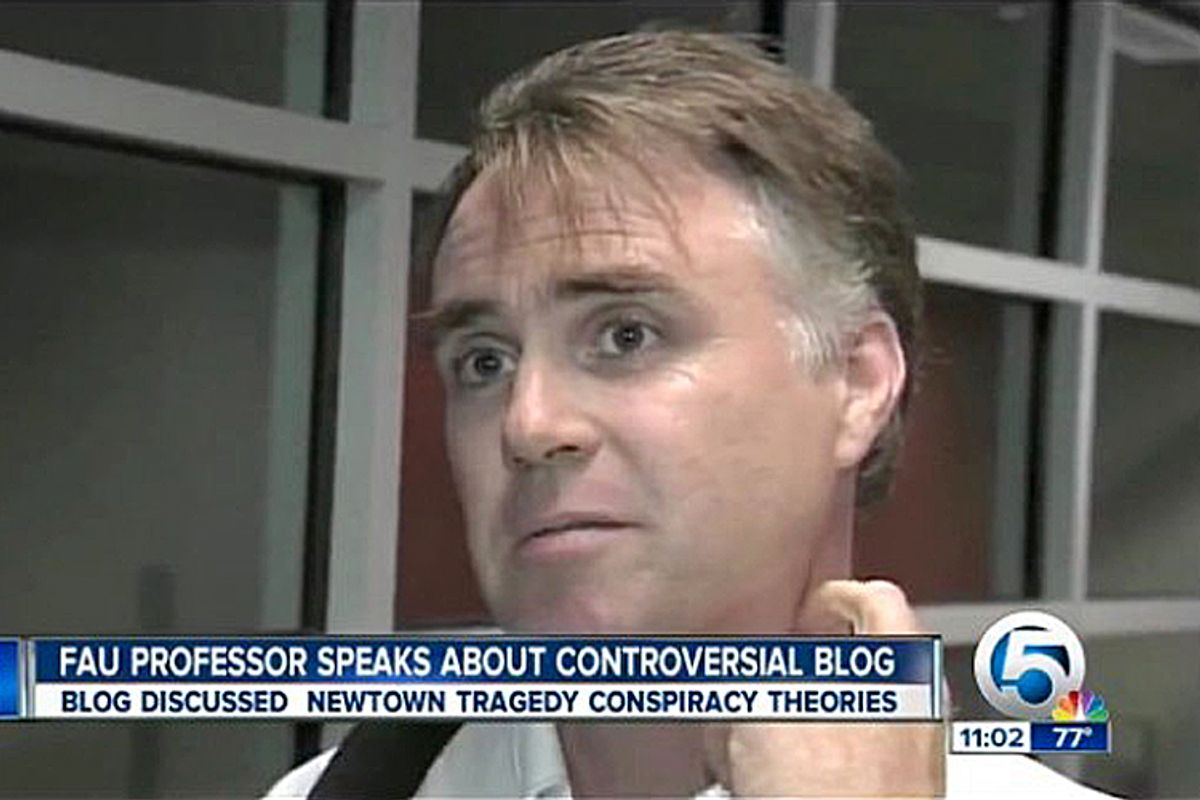 Florida Atlantic University professor James Tracy is standing by his controversial views on the Sandy Hook massacre, saying in a radio interview today that “crisis actors” may have been used to “embellish” the shooting, just as they did in 9/11.

Tracy has been lying low since sparking international controversy recently by writing a blog post advancing conspiracy theories about the massacre, but he broke his silence this afternoon with an hour-and-20-minute-long interview on the radio program hosted by conspiracy theorist Alex Jones. Today, however, Jones was out, so Tracy spoke with guest host Paul Joseph Watson. (The "crisis actors" myth is bogus, of course.)

In addition to theories  about Sandy Hook laid out in his blog post, Tracy distanced himself from some of the more bizarre conspiracy theories out there. Those theories, he said, may be the work of whoever is trying to hide the truth about Sandy Hook.

Asked by Watson about some of theories even the two of them don't believe, Tracy replied: “I think that there is definitely a program to sow misinformation in the stream of information in order to muddy the waters and in the process discredit the research that independent researchers and the like are putting together in alternative media. Because if you can discredit it or muddy the waters to a limited degree in one area, you can paint with a fairly broad brush, the mainstream corporate media can do that."

Tracy, a communications professor who teaches a class on conspiracies, has tenure at FAU, but is reportedly facing a review that could lead to the loss of his job. FAU is a public university that receives taxpayer funds.

Tracy also expressed skepticism about the veracity of the terror attacks on Sept. 11, 2001, in New York and Washington, and on July 7, 2005, in London, saying they were “drill[s]” that “went live” and used “crisis actors.” “If this [Sandy Hook] were a drill that somehow went live, as we know that, for example, 9/11 and 7/7/05 bombings were, then it would have involved actors along these line,” he said.

He continued: “This idea that a steel-framed building could collapse as a result of the heat from the airplanes is something that was put out there at the time to sort of deflect any questioning about how could these buildings possibly have come down within their own footprint.”

Tracy is also a little behind on state-of-the-art Sandy Hook conspiracy theorizing, still giving credence to theories that have long since been abandoned by the cutting-edge theorists, such as questions about Adam Lanza’s car or the rifle that was supposedly locked in this trunk.

Tracy makes it clear that he thinks children were actually killed at Sandy Hook, but that actors may have been used to “massage the narrative.” “I am simply posing questions,” Tracy says in the classic theorists' defense. He went on to say that he thinks it’s “offensive to the people who lost love ones” that the media took his question as assertions.

Somehow we doubt that that's what the families are offended by.

Listen to the full interview: