“We are made for this moment”

Hailing Seneca Falls, Selma and Stonewall, President Obama recommits the nation to real equality for everyone 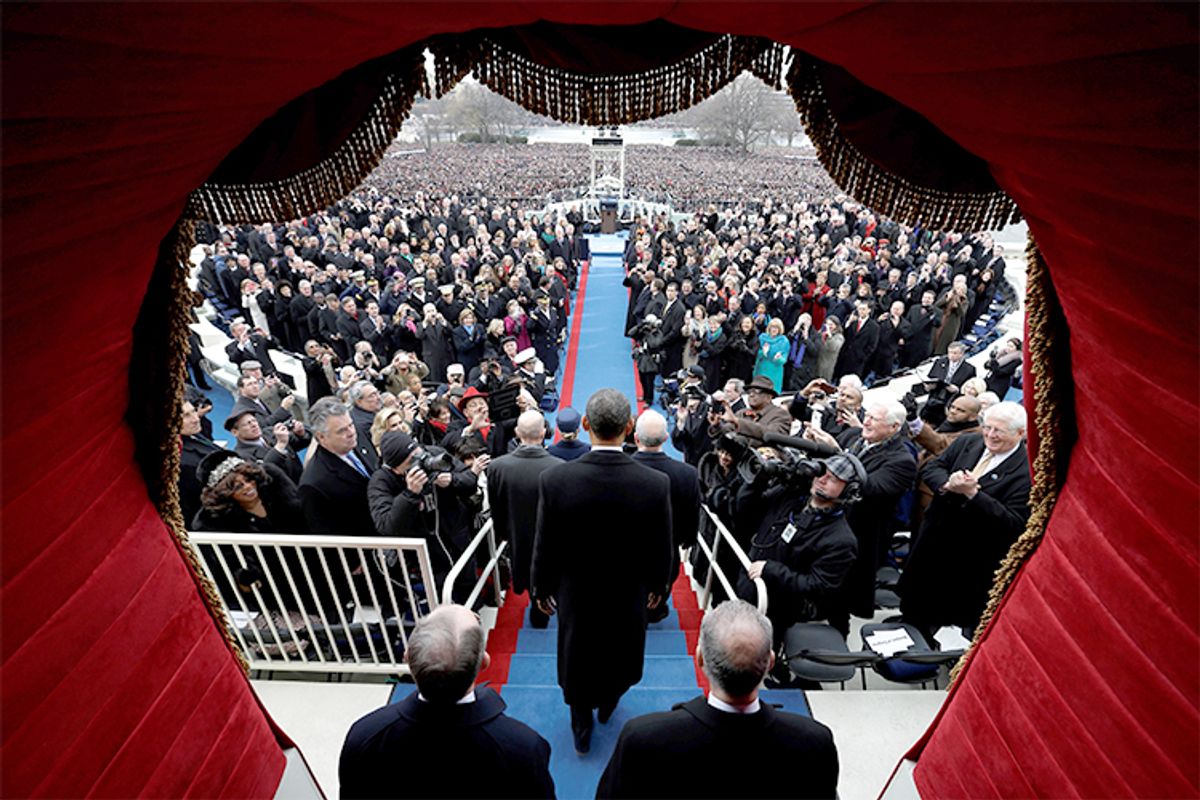 An older, wiser, tougher and stronger President Obama celebrated the Martin Luther King holiday with a speech King would have applauded. Four years ago he promised to put away “childish things” like partisanship and mostly sounded high notes of harmony; this time he committed himself and the nation to making good the promise of the founders by fighting for it. And that sounded even better.

Like most liberals, I loved his invocation of our great civil rights struggles in “Seneca Falls, and Selma, and Stonewall,” knitting together battles for women’s rights, African American equality and gay rights in a righteous quilt of justice. But my favorite moment was when he practically called out Paul Ryan and Mitt Romney by name, denouncing their effort to pit American “makers” against so-called “takers:”

The commitments we make to each other – through Medicare, and Medicaid, and Social Security – these things do not sap our initiative; they strengthen us.  They do not make us a nation of takers; they free us to take the risks that make this country great.

As someone who’s fretted over possible future clashes between what the National Journal’s Ron Brownstein has termed “the Brown vs. the Gray” – our multiracial young people vs. our mostly white senior citizens – I particularly loved that the president declared flatly, “We reject the belief that America must choose between caring for the generation that built this country and investing in the generation that will build its future.”

Yes, there was soaring nonpartisan rhetoric and denunciations of “name-calling” and “absolutism” that were appropriate to a day that transcends partisanship, or is supposed to. But there were also nuts and bolts promises too, on equal pay, marriage equality, immigration reform, poverty and voting rights. “Our journey is not complete,” he said, "until no citizen is forced to wait for hours to exercise the right to vote.” No, he didn't forget about that.

Obama gave the American founders their due, reciting the opening lines of the Declaration of Independence verbatim. But unlike Tea Party poseurs, he argued that fealty to the founders requires courage and change, calling the American experiment “a never-ending journey, to bridge the meaning of those words with the realities of our time.” Though the founders “truths may be self-evident, they have never been self-executing; that while freedom is a gift from God, it must be secured by His people here on Earth.”

And while saluting American independence and suspicion about “central authority,” he nonetheless insisted that “preserving our individual freedoms ultimately requires collective action."

Sometimes even those of us who embrace diversity talk about dealing with it as an obligation; the president described it as an opportunity. “America’s possibilities are limitless,” he told the crowd, “for we possess all the qualities that this world without boundaries demands:  youth and drive; diversity and openness; an endless capacity for risk and a gift for reinvention.”

“We are made for this moment,” he went on, “as long as we seize it – and seize it together.”

It was also thrilling to hear the president declare “We, the people, still believe that enduring security and lasting peace do not require perpetual war.” He’s got a ways to go on that one, however.

Four years ago I watched his first inaugural address from the first row in the spectators’ section, and it was glorious. Just behind me, Denzel Washington sat smiling, mostly undisturbed, while Jay-Z and Beyonce drew a bit more attention behind him. Celebrities shared space with ancient Tuskegee airmen and Sonoma, California schoolchildren. In a frosty wind I struggled to put on a hat – I don’t wear hats – and two older women came and fixed it for me so it almost looked stylish. That’s the kind of day it was; strangers became like family.

I missed being there today, but I was also glad to be able to see the morning unfold in all its joy and complexity, and to see what “we the people” – the people on Twitter, anyway – did to enhance it: This heartbreaking Life magazine photo of Medgar Evers’ widow, Myrlie Evers-Williams, who gave the invocation; this shot of Eric Cantor not quite getting Richard Blanco’s lovely poem; Paul Ryan leaving the ceremony right beyond Beyonce. Anyway, the real action starts tomorrow and continues…forever, actually. There will be many more great moments to share if we remember that.