Michelle Obama, where are your table manners?

It wasn't her visible disdain for Boehner that shocked a nation. It was her elbows on the table! 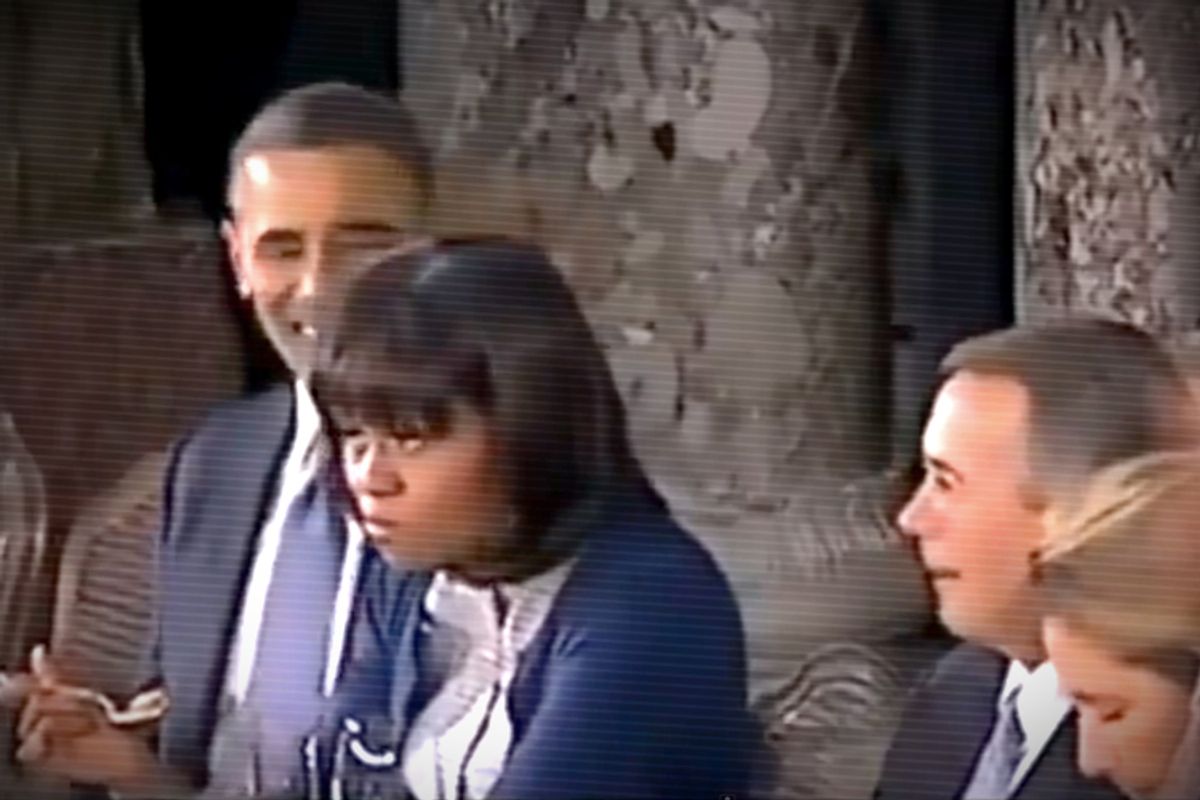 The time has come once again to discuss Michelle Obama's arms. Not the fact that, when she danced with her husband Monday evening in a fire-engine red Jason Wu dress, she proved yet again that she's got the best biceps in the Beltway. There's no disputing that four years after she made America go crazy for her guns, she's still got it. The issue is where she's putting them.

When, during Monday's inauguration lunch, the First Lady made the eyeroll that went instantly viral, it wasn't just her Joe Biden–worthy, "Oh, hell no" disdain for John Boehner that made the clip noteworthy. It was the way that she shifted her body at the table when Boehner tapped her famous arm, the way she planted her left elbow on the table. The First Lady's elbow. On the table. I can't even.

I have watched that 16-second clip about 8,000 times since it first appeared, and every time, I keep hoping, in that moment before she does it, that Michelle Obama won't stick her elbow on the table. My beautiful, elegant FLOTUS. How can this be happening? And then I watch it again. My world, people, is utterly rocked. Yesterday, Michelle Obama was one of my heroes. Today, I am genuinely afraid she might salt her food before tasting it. I'm scared she might eat her soup with her spoon aiming toward her instead of away. HOLD ME, AMERICA.

Believe me, if I ever found myself seated next to John Boehner, I too might be tempted to deploy my elbows in service of staking out a little more personal territory. I likewise know conventional table manners can be disputed, and even controversial. Sure, I would no sooner lay my cutlery crosswise on my plate at the end of a meal -- instead of parallel — than I would refold a dirty napkin. That'd be ridiculous! Yet I know others feel strongly that crossed is the way to go. I know not everyone dies a little inside when a plate is passed to the left, or someone blows on hot food. I know we live in more relaxed times. And I admit I am no great authority on etiquette. I instead am one who has the unfortunate habit of getting halfway through a meal before realizing I'm eating it with the salad fork. Damn you, salad fork.

Yet Michelle Obama's breach was no violation of an archaic convention. This wasn't some obscure, draconian fish fork matter. The arms on the table thing is one of the big three, right up there with not talking with your mouth full or picking your teeth at the table. And this wasn't even a casual meal, with a little friendly propped elbows action, like her husband has been wont to engage in. This was an official state event and a full-on lower half of the arm move. A move that made Michelle Obama look like, as I always chastise my daughters, a person who's afraid her plate is going to be taken away. That is so not cool. Then again, at least she wasn't chewing gum like Barack was -- the first great disappointment of his second term.

I have spent the past 13 long years yelling at my daughters about where their elbows belong during a meal. Should they attempt to take a bite of food before everyone at the table is seated and served, they get an icy glare that would make Michelle Obama's Boehner-aimed death ray look like pure warmth. And if they get up without excusing themselves, they're not welcome back. It's minor stuff, maybe, but also basic courtesy to the other people at the table. Good manners say that we have to share this space, so let's do it amicably. Isn't that what exactly American politics needs? And though I sincerely hope that as the president enters his second term both Democrats and Republicans can reach across the aisle toward each other, I also can't help praying they don't do the same at the dinner table.