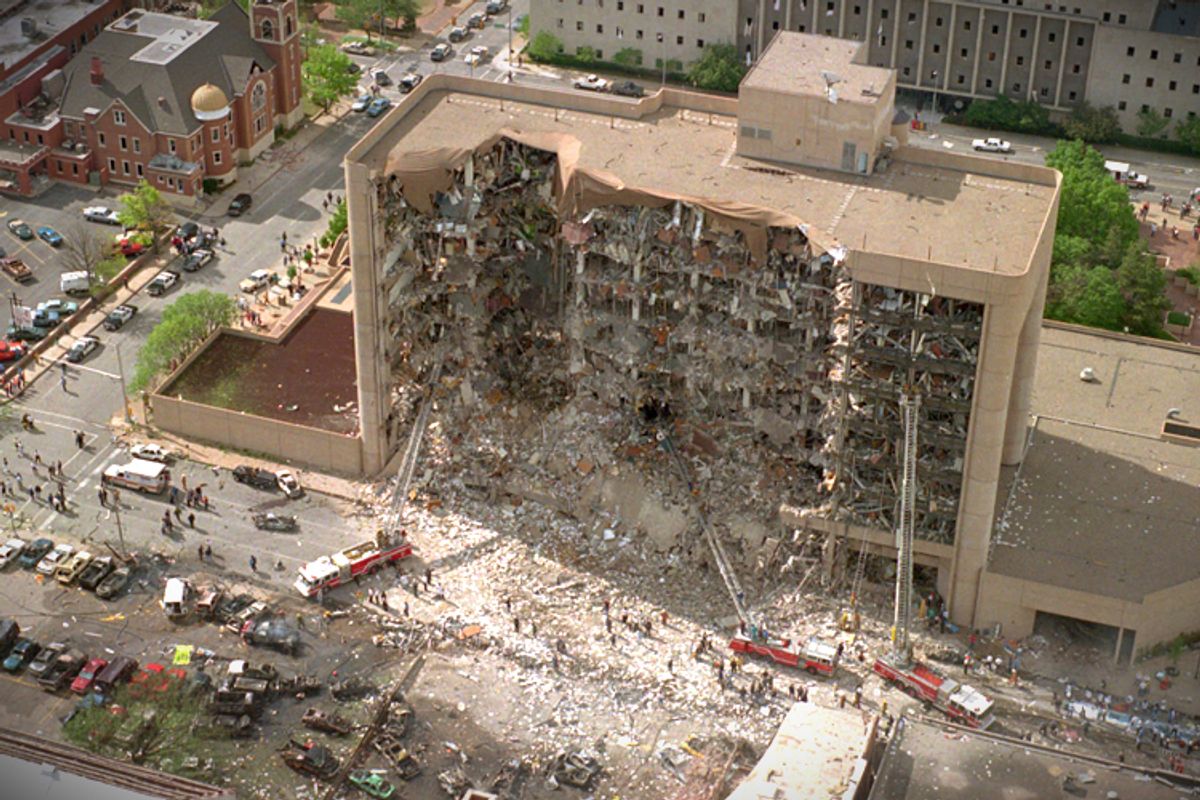 There are four revealing stories to be gleaned from the Aggrieved Conservative Backlash™ to an exhaustive and sober new West Point Combating Terrorism Center report on "Understanding America's Violent Far-Right." (For a more grass roots-y look at how hysterical and viral that backlash is, see some choice tweets here.)

First, there is the obvious lesson about double standards. When the government accuses a Muslim group of being a national security threat, conservatives are quick to applaud and demand immediate (often violent) action, without regard for the whole "innocent until proven guilty" stuff. By contrast, when the government accuses an ideologically right-wing group of being a similarly dangerous threat, many of the same conservatives suddenly play the victim card, insisting that the Big Bad Government is wrongly demonizing them.

Second, the backlash tells the story of how priorities abruptly change when the context shifts. Again, when the government accuses a Muslim group of posing a threat, the substance of the accusations (how much of a threat? what is the operational capacity of the threat? etc.) are typically received by conservatives as serious national security issues. But when far right groups are labeled a threat, many conservatives' first reflex is to defend the accused and wholly ignore the substance of the accusations no matter how well documented those accusations are (and say what you will about the West Point report's conclusions, its supporting evidence is most certainly well-documented).

This spotlights the third story line: that of the double standard that governs what is, and is not, considered an acceptable rhetorical response to a purported national security threat. In the reaction to the West Point report, many conservatives seem to be arguing that the government is unduly targeting the anti-government/allegedly pro-freedom agenda that they share with far-right extremist groups. This move to first and foremost defend the common ideology is apparently seen as A-OK. But ask yourself: How would liberals be received if, upon publication of a report about Islamic terrorism, their reaction was first and foremost to publicly defend, say, the anti-imperialist sentiment of the accused terrorists? Such a reaction probably would get those liberals accused of "giving aid and comfort" to said terrorists and therefore being traitors to country.

Finally, and perhaps most revealingly, there is the fourth story, the one of desperate, almost comical misdirection in the face of all-too-serious evidence. In following up its original story with a piece headlined "‘Far Right’ report outrages critics of federalism," the right-wing Washington Times tells us that conservatives "wonder why an institution that molds future Army officers to fight foreign enemies now is focusing on a perceived domestic threat." The paper then quotes "a Republican congressional staffer who served in the military" demanding to know why West Point would dare focus on right-wing terrorism at all.

"If [the Defense Department] is looking for places to cut spending, this junk study is ground zero," the staffer said. “Shouldn’t the Combating Terrorism Center be combating radical Islam around the globe instead of perpetuating the left’s myth that right-wingers are terrorists?”

This attempt to marginalize was predictably echoed by the National Review's John Fund, who says the report aims to "lump together every known liberal stereotype about conservatives between its covers," and that therefore, "it might be wise for all of us to be skeptical of [the West Point Combating Terrorism Center's] other work." The overarching point in this line of criticism is that West Point supposedly has no legitimate reason to even look at domestic right-wing extremism -- and that therefore the only possible reason it is doing so is, as conservative blogger Pam Geller alleges, because it received "orders from higher ups" in the Obama administration. We are supposed to consequently conclude that any of the report's findings should be ignored because the report itself has no credible standing.

To see this crude misdirect tactic for what it really is, set aside for a moment the fact that the overwhelming evidence presented by West Point inherently elucidates why the Combating Terrorism Center would be interested in the subject of right-wing terrorism. Set aside, too, the fact that, according to FBI data, there have been more right-wing terrorist plots than Islamic terrorist plots in recent years, thus justifying a military institution's interest in both the latter and the former. Set aside even your own memories of Oklahoma City and all the acts of right-wing terrorism in the last few years that should prove why America's military academy would want to study such terrorism.

Instead, simply recall the 2009 findings of the Department of Homeland Security, and also look at which circumstances tend to evoke right-wing terrorism in the first place.

Though similarly slammed by the GOP as an Obama-orchestrated assault on conservatives, that DHS report on right-wing extremism was requested by the Bush administration and written by Bush-era career DHS employees. You will recall that it warned that right-wing extremist groups specifically target U.S. soldiers for recruitment.

Meanwhile, as Table 1 of the West Point study shows, right-wing violence tends to spike around presidential election years. Additionally, the same report charts a correlation between right-wing violence and "the sense of empowerment that emerges when the political system is perceived to be increasingly permissive to far right ideas."

Considering this, it should be painfully obvious why West Point is looking at right-wing terrorism right now. Simply put, there is legitimate reason for the military institution to at least assess whether that kind of terrorism will target West Point cadets (read: future soldiers) for recruitment; whether that terrorism might spike in the aftermath of a presidential campaign; and whether it will be fueled by a "sense of empowerment" that could emerge with a House of Representatives dominated by "far right ideas."

None of this, of course, is to argue that all or most conservatives are terrorists. The West Point report doesn't come close to doing that, and it shouldn't be used to make such allegations.

However, it is to argue that in light of all the aforementioned reasons why the school should look at right-wing terrorism, those who suggest that it nonetheless shouldn't are effectively asking America's premiere military academy to succumb to a form of "political correctness." Regularly championed by conservatives, this particularly pernicious strain of "political correctness" says we somehow can't talk about (or in this case, even study) anything that offends the political ideology of the conservative movement.

We see that kind of p.c. policing in the gun debate, and we now see it in reaction to terrorism research -- and it should be ignored as an affront not merely to liberty, but in this case, to national security as well.