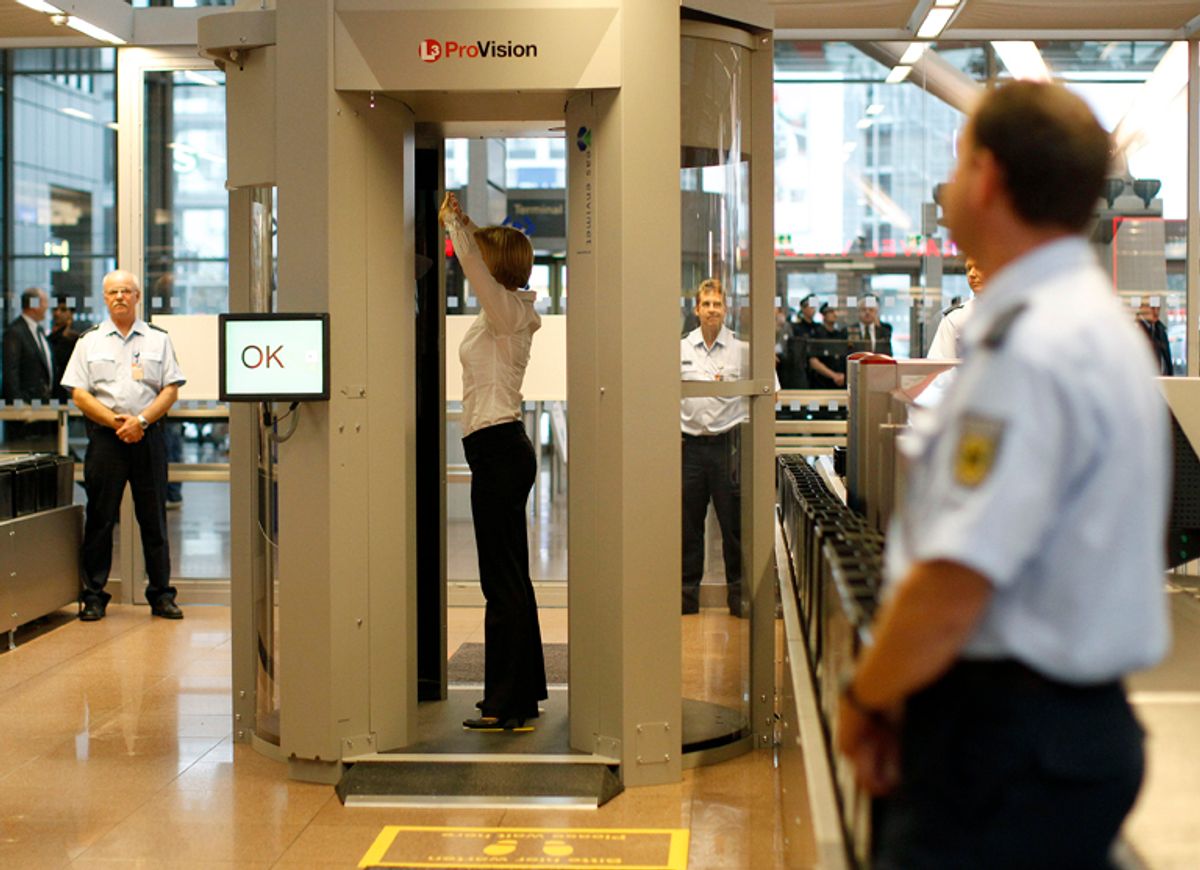 A security official demonstrates a full body scanner during a photocall at Departure Gate 2 at Hamburg Airport September 27, 2010. Germany started on Monday the voluntary use of two 'L-3 Provision ATD' body scanners for a test period over the next six months at the airport. REUTERS/Christian Charisius (GERMANY - Tags: TRANSPORT SCI TECH) (Â© Christian Charisius / Reuters)
--

The Transportation Security Administration will remove all X-ray body scanners from airports, Bloomberg News reports. The reason: Software couldn't be developed by a congressionally mandated deadline to automatically detect suspicious items on the body. Instead, TSA officers viewed images of passengers' naked bodies to see if they were carrying weapons or other contraband, a process that privacy advocates have dubbed a "virtual strip search."

Privacy had not been the only concern dogging the scanners. A ProPublica investigation found that the TSA had glossed over the small cancer risk posed by even the low doses of radiation emitted by X-ray scanners. The stories also showed that the United States was almost alone in the world in X-raying passengers and that the Food and Drug Administration had gone against its own advisory panel, which recommended the agency set a federal safety standard for security X-rays. In addition, ProPublica reported that, outside airports, other security agencies are exposing people to radiation in more settings and in increasing doses.

The TSA also uses another, safer kind of scanner that doesn't emit X-rays. Instead, it sends out millimeter waves like those used in cell phones. Although there has been some doubt about the long-term safety of millimeter waves, scientists have not found a mechanism for such waves to mutate genes and cause cancer.

In October, the TSA parked many of its 250 X-ray scanners in a Texas warehouse after it removed them from most of the biggest U.S. airports, including Los Angeles, Chicago O'Hare, New York's John F. Kennedy, Boston Logan, Charlotte Douglas and Orlando. Back then, the TSA said it made the change to speed up checkpoints at busier airports. Because human officers have to view images, the X-ray scanners are slower than the automated millimeter wave machines.

In November, the TSA sent the maker of the scanners, Rapiscan Systems, a "show cause letter," which is typically issued when the government is considering terminating a contract. Rep. Mike Rogers, the Republican head of the House transportation security subcommittee, cited an allegation that Rapiscan had falsified a software test, which the company denies.

X-ray scanners could still come back. The TSA is considering an X-ray machine made by another company under a contract for the next generation of body scanners.

The last X-ray scanners in use in Europe were removed from Manchester Airport in the United Kingdom in September. Israel, which is influential in the security world, has installed an X-ray body scanner for testing at Ben Gurion Airport in Tel Aviv.