Malians want the French to stay 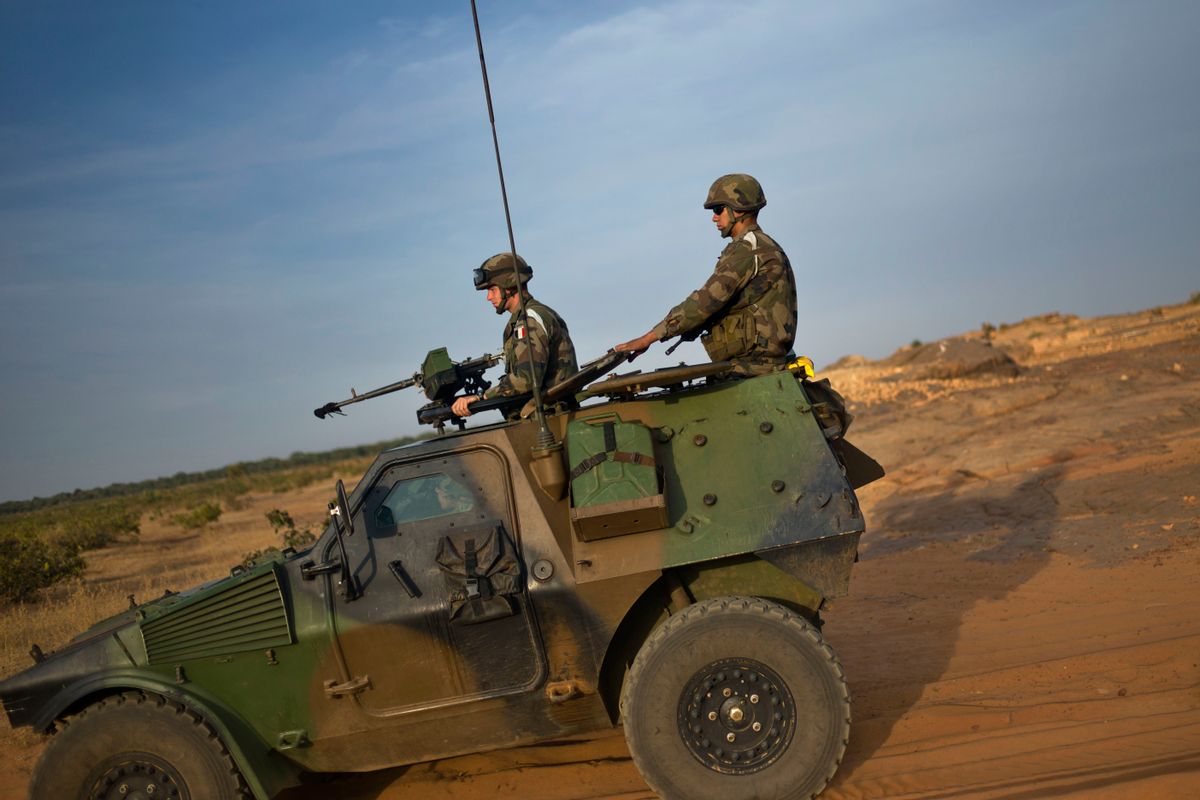 The French air strikes, which began on Jan. 11, were in response to a southward advance from Islamist forces that had wrested control of the northern half of the country.

The strikes have successfully put the Islamists on the back foot, allowing the Malian army to claw back territory held, in some cases, for months.

On Monday, after days of precisely targeted bombing raids, Malian and French troops occupied the key town of Diabaly, about 275 miles north of the capital Bamako.

Sixty-year-old Adama Natoume was asleep in bed when three vehicles exploded outside his one-room house in Diabaly. Shrapnel flew in through the window but while the outer wall was left charred and a little ragged, there was no other damage.

“I had never heard a noise so loud,” Natoume said, recalling the raid.

Like other residents of Diabaly, a low-rise town of mud buildings and mango trees next to an irrigation canal that channels the Niger River, Natoume was grateful for the French-led intervention but fearful the Islamists may yet return.

“When the French military leave, who will protect us?” he asked.

Malian people have lost faith in their army. It has been routed by Islamist fighters in battle, fled towns leaving civilians to the depredations of extremist rule, abandoned its own weapons and ammunition and launched a coup that overthrew the government last March.

The collapse of the Malian state, aided and abetted by its own army, allowed a coalition of tribal Tuareg separatists and Islamist forces to annex the country’s desert north, a region the size of Texas.

The Islamists then turned on their allies, wresting control from the Tuaregs, a nomadic people ethnically distinct from Arabs.

The Islamists began imposing Shariah law, meting out brutal punishments and attracting support from other Islamist groups, most notably Al Qaeda in the Islamic Maghreb (AQIM).

AQIM’s funds and fervor have strengthened the Islamist group Ansar Dine (Defenders of the Faith) and another group, the Movement for Unity and Jihad in West Africa (MUJWA). But the decision to make a southward advance a fortnight ago triggered a quick and concerted French response.

There are now 2,150 French soldiers in Mali and more than 1,000 troops from regional African nations, who are arriving as part of a United Nations-mandated mission to retake the north.

But for now it is very much a French operation. French troops are billeted alongside Malian ones in Diabaly and the surrounding area and no one is in any doubt that it was the French airstrikes that dislodged the Islamists from the town.

“If I am sitting here now it is only because of the French,” said 29-year-old motorbike mechanic Drissa Simayoko.

Sitting beneath a hand-stitched French tricolor on the edge of Diabaly’s market, Tounkara Hamet, 28, remembered well the moment early last Monday morning when the Islamists came to town.

Mali’s soldiers rushed around town warning people to stay indoors and then many of them went indoors themselves and changed into civilian dress. Hamet said there was some brief street fighting and then the army fled, pulling back to the town of Niono, 25 miles away. Women and children ran away to a nearby village but many of the men stayed to protect their property.

“Then I was scared again because we have heard that they cut off hands and feet,” he said, referring to reported atrocities carried out in Timbuktu and Gao, northern cities held by Islamists.

Diabaly’s mayor, Oumar Diakite, was lucky: he was out of town when the Islamists arrived, so instead they trashed his office. “The destroyed everything,” he said, surveying the broken tables and overturned chairs. Had he been there he is sure they would have killed him.

The Islamists also went on a petulant rampage through the town’s small Catholic church, smashing the large wooden crucifix, beheading a stone statue of the Virgin Mary and leaving a decapitated plastic baby Jesus on the altar.

But their reign was short. The night they arrived the French air strikes began, and by Friday the last Islamist fighters left on motorbikes after burying the bodies of their dead comrades who had to be transported to the cemetery in three pick-up trucks.

When Malian and French soldiers entered Diabaly on Monday, all the fighters were gone.

A similar picture is emerging from the town of Douentza, which the Islamists had held for the last four months. When French and Malian troops arrived there on Monday they found it abandoned.

With African troops arriving and the US airlifting French troops and equipment to Bamako, it seems only a matter of time before the Islamist fighters are dislodged from the urban centers they have held, some for as long as 10 months.

But pushing them into the desert is not the same as winning the war, that will take longer and require more than air raids.

“If the French are here we’re not scared, but we don’t trust the Mali army,” said Hamet who, like others, feared an Islamist resurgence. “This is not the end we need the French forces to stay here.”