Manti Te'o wants you to feel his pain

In an interview with Katie Couric, the linebacker asks for more than forgiveness 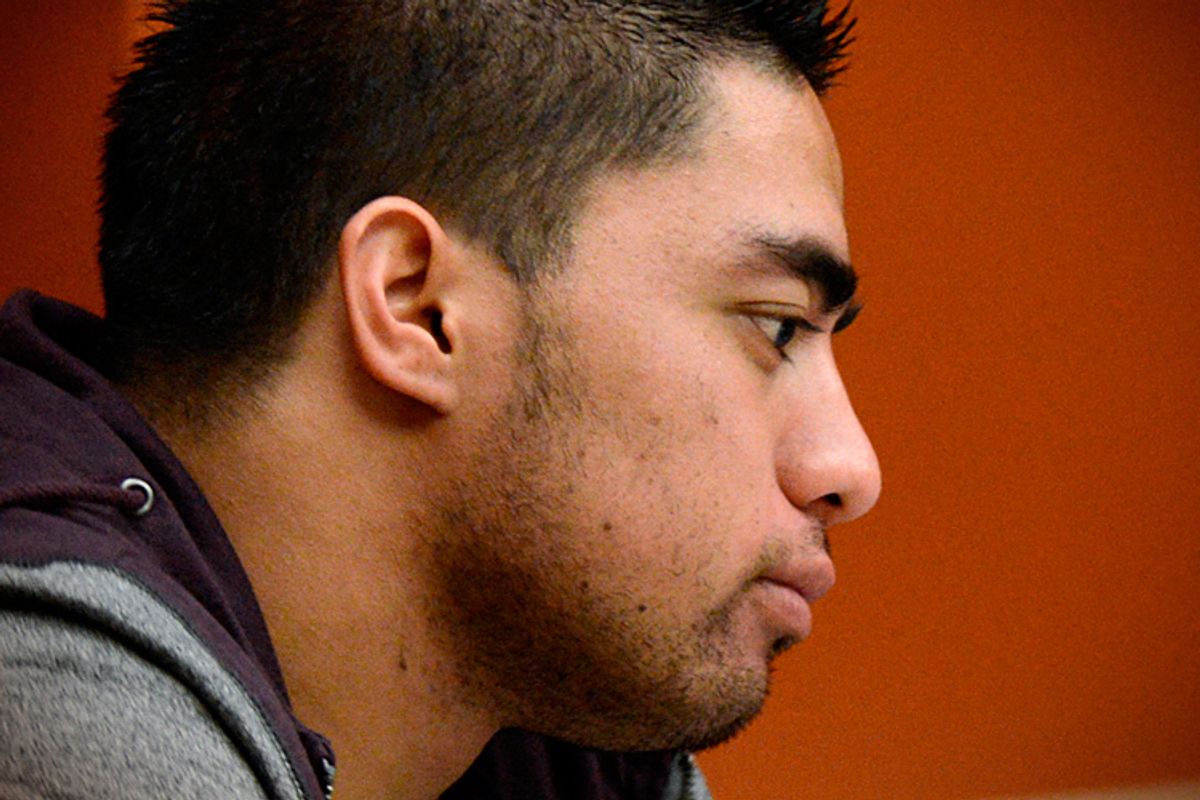 Manti Te'o knows he told a whopper. He stood before the world and spoke of the grief he felt for the girlfriend he lost to cancer, knowing full well that his beautiful, doomed Lennay Kekua never existed. But in an interview with Katie Couric airing Thursday afternoon, the Notre Dame linebacker makes a surprising defensive move.

After Deadspin earlier this month exposed the bizarre tale of the football player and the hoax he insists he was a victim of, Te'o still had to account for the fact that he'd continued to publicly play the part of the bereaved boyfriend for weeks after he discovered the ruse. In an interview with ESPN this week, Te'o defended the deception by couching it in the most innocent-sounding of terms, saying, "Not ever would I be part of this," and explaining that he continued to speak of his girlfriend because "I was confused. I didn't know … There were a whole bunch of possibilities going through my head." He did, however, admit that he "catered" his stories to seem like he and the fake girlfriend spent time together and that  "I kind of tailored my stories to have people think that, yeah, [my father] met her before she passed away. So people wouldn't think that I was some crazy dude."

But with Couric, he has taken a different tack.  "Katie, put yourself in my situation," he asks. "My whole world told me that she died on September 12. Everybody knew that. This girl, who I committed myself to, died on September 12. Now I get a phone call on December 6, saying that she's alive and then I'm going be put on national TV two days later. And to ask me about the same question. You know, what would you do?"

What would you do? It's a strange situation to contemplate, especially when the reply many of us would likely give would be, "I wouldn't claim to have a romantic relationship with someone I'd never met." But if Te'o is to be believed, the hoax was desperately cruel – down to letting him believe that his beloved had died in the shadow of his grandmother's very real passing in September. And Couric says she's seen the phone logs that seem to back up his claim of a lengthy and intense – if not physical – love affair. So if you were in the guy's position, would you hold a press conference and say you'd been lied to? Would you suddenly refuse to speak of your newly lost love? Or would you play along for a while, too stunned to know how to act? Remember, you're a 21-year-old Mormon, a rising football star, and a person whose tragic story has been the tear-jerker of the season. Your situation is so unusual, there is no precedent to help you figure out the appropriate course of action. It's easy to say you'd do better than Te'o. It's a lot harder to imagine actually having to take a crack at it.

Te'o acknowledges that he "basked" in the feeling that "I had an impact on people; that people turned to me for inspiration. And I think that was the only thing I focused on. My story, I felt, was a guy who in times of hardship and in times of trial, held strong to his faith, held strong to his family, and I felt that was my story." Now he asks Couric and the rest of us to ponder what it would feel like to learn that inspirational story wasn't entirely authentic. How we would face the glare of the spotlight and the scrutiny that comes with it. And oddly enough, the devoted Mormon's plea sounds a lot like Planned Parenthood's new campaign, which asserts that "Most things in life aren't simple" and asks us to remember we're not in anyone else's shoes.

The general protocol of the confessional television interview is for the subject to sit down and take his lumps while appearing as abashed and contrite as he can muster. It's a bold move for him to turn the tables and start asking questions – tough ones at that. He knows his story is a screwy one. That's why he's asking for something even harder to grant than a pardon. He's asking for understanding.