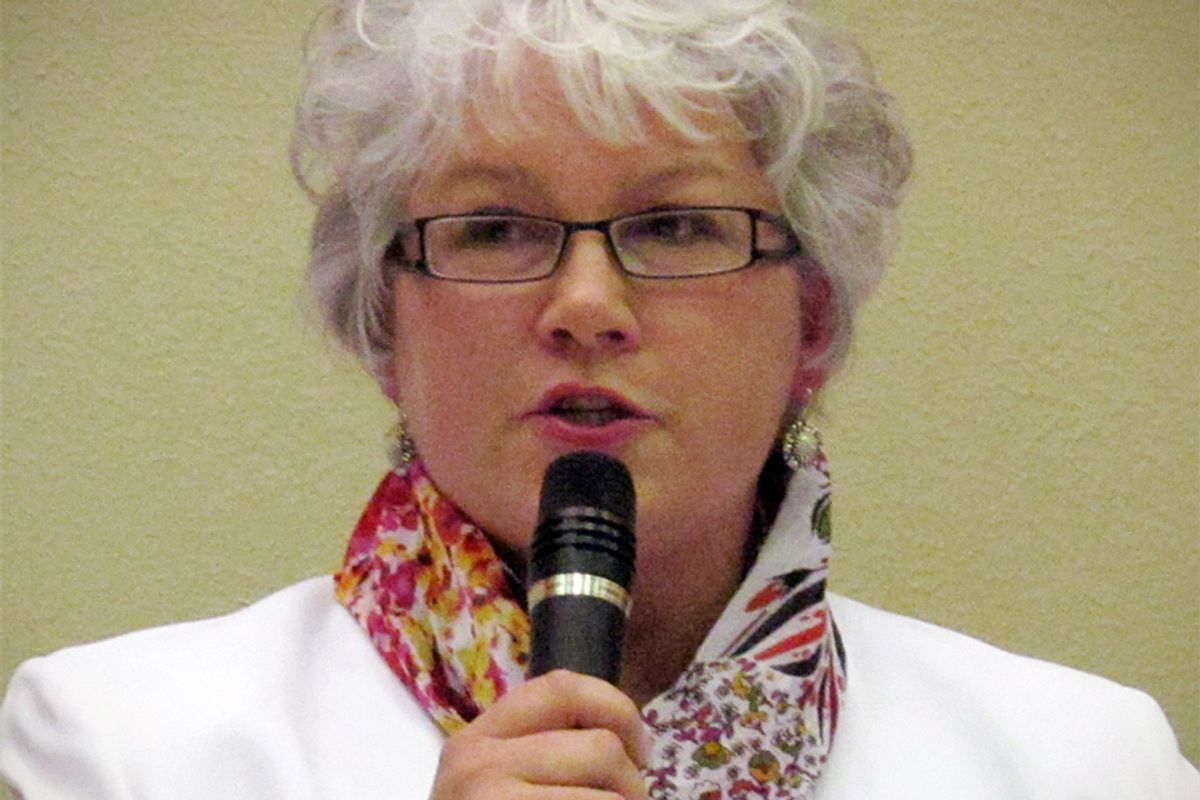 Just one day after quietly introducing a whopper of a bill that would categorize abortions for pregnancies resulting from rape or incest as "tampering with evidence," New Mexico State Rep. Cathrynn N. Brown found herself doing some swift damage control.

As it still currently appears on the New Mexico Legislature's page, Bill HB206 is blazingly, insanely straightforward. It explains that "tampering with evidence shall include procuring or facilitating an abortion, or compelling or coercing another to obtain an abortion of a fetus that is the result of criminal sexual penetration or incest with the intent to destroy evidence of the crime" and states "whoever commits tampering with evidence shall be punished" with varying degrees of felony charges. Isn't it sweet when politicians try to defend the cause of "life" by categorizing fetuses as "evidence"? As one skeptic pondered Thursday, "So I assume, as evidence, the court will be holding the fetus in a locker and destroying it after trial?"

But Brown's clever ruse to redefine a woman's constitutional right as criminal tampering didn't go over very well, and as the bill made national headlines Thursday, Brown not so coincidentally removed her contact information from her legislature page. But her personal Web page, which greets visitors with a photo from the governor's prayer breakfast, tells a tale of somebody who's been trying to tweak the narrative. There's a record of two now-deleted posts entered on Thursday evening, followed by a statement from Brown that reads, "This is the bill that I will introduce that protects women and girls from incest and other sex crimes: It makes it clear that the mother of the fetus would never be charged. This bill ensures the prosecution of the offender and protection of the victim."

In the bill's newly gussied up language, it specifies that "a person who commits sexual penetration or incest and who procures an abortion of a fetus resulting from the crime with the intent to destroy evidence of the crime is guilty of tampering with evidence, prohibiting prosecution of the mother of the fetus … In no circumstance shall the mother of the fetus be charged." So if you're a rapist and you try to get your victim to have an abortion, you're in trouble. Because that happens every day. Brown's apparent interest in protecting women should be taken within the context of her other pursuits, however, like serving on the board of Carlsbad's Right to Life chapter, and posting images from the Life Issues Institute on her Facebook page. The Institute describes its mission as "assuring … equal protection under the law for all living humans from the beginning of their biological life at fertilization."

In a Thursday feature that ran in the Carlsbad Current-Argus, Brown, an experienced attorney, told Milan Simonich that the bill had been drafted too quickly and an "error" had caused it to be introduced before it was ready. "I missed this one," she explained. Albuquerque Rep. Nate Gentry supported Brown's assertion, adding, "She's horrified."

What a perfectly apt word. "Horrified" is exactly how one should feel about Brown's sneaky, cruel and desperately punitive-to-victims bill. Too bad she's horrified at being exposed for such a dumb, callous attempt to criminalize reproductive rights instead of at the idiotic obstacles continually thrown in the path of women seeking safe, legal abortions. But if you're looking for proof of the callousness of the antiabortion movement and the extreme lengths to which they'll go, you can at least give credit to Brown for providing the one thing she seems to care so very much about. Evidence.