3-D printing technology could make efforts to curb weapons impossible. Do-it-yourself techies are cool with that 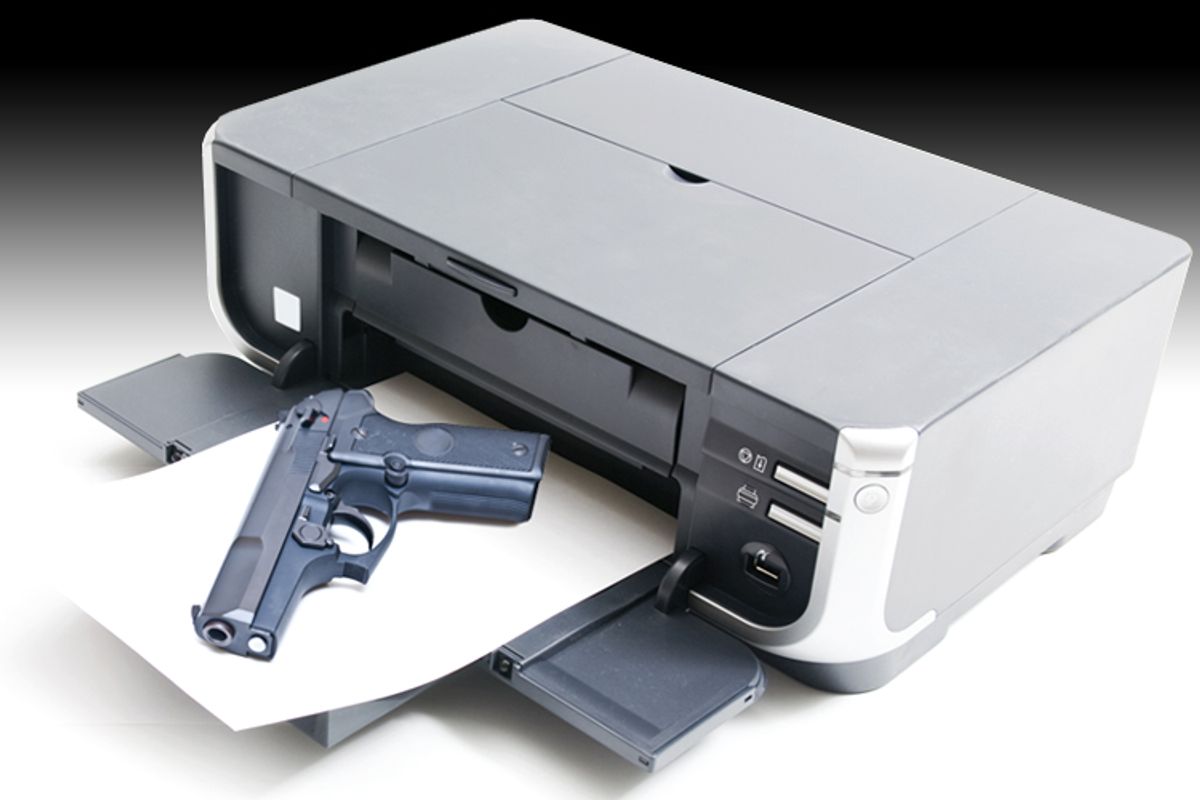 "How's that national conversation going?" sneers Cody Wilson, founder of Defense Distributed, an organization dedicated to making it easy for anyone to 3-D print their own gun. It's the opening line of a video showcasing Defense Distributed's successful employment of a 3-D printer to manufacture a plastic high-capacity ammo clip for an AR-15 rifle.

Wilson is namechecking Democratic House Majority Leader Nancy Pelosi's call for a "new conversation" on gun control in the wake of the Newtown, Conn., massacre. Wilson follows up his question by firing off a few rounds of ammunition, giving his handiwork an admiring look, and declaring: "Welcome to the age of the printed magazine." The screen flashes a message: "Download your mag today."

The 51-second video closes with Wilson eating a meal. An off-camera voice asks him: "So how does it taste?" His answer: "Tastes like Dianne Feinstein's lunch." It's another anti-gun control broadside, a slam against the Democratic senator who plans to introduce legislation that would reinstate the ban on selling high-capacity ammunition magazines that existed from 1994 to 2004.

Wilson's message could not be more blatant. In the age of cheap 3-D printers and open-source, easily downloadable design code, he is declaring that gun control is obsolete. So don't even bother trying.

After four high-profile mass murders involving guns over the last two years, gun control is once again a hot political issue in the United States. President Obama has made it clear that he will push for significant new gun control measures. But not only is it doubtful that Obama's new push will successfully move legislation out of Congress, but the entire question of how to achieve effective gun control has been complicated by the onrushing era of ubiquitous do-it-yourself 3-D printing technology. Gun rights activists like Wilson are arguing that even the toughest new laws will be toothless.

And they may be right, if the history of computer technology is any guide. When music became software in the 1990s, the jig was up for the music business as we had known it. Now things are becoming software -- and what that means for the future is anyone's guess.

At the moment, sure, there's still plenty of hype included in the do-it-yourself weapons manufacturing kit. Evangelists for 3-D printing are quick to note that it is still a lot easier to buy a gun (or steal your mother's AR-15) than make your own from scratch. Moreover, experts in gun technology caution that an assault rifle assembled solely from plastic parts extruded from your typical 3-D printer today would be highly likely to self-destruct after a single shot, if it worked at all.

But the technological frontier moves awfully fast. The cost of 3-D printing is plummeting even as technological capabilities soar. There seems little doubt that we are witnessing the maturation of an extraordinarily disruptive technology with incalculable consequences for the manufacturing process of all kinds of products. Perhaps not today, but almost certainly tomorrow, the code to 3-D print your own gun will be as shareable as MP3s. Outmoded legal approaches to restricting gun ownership may not apply.

How are we supposed to think about that? More to the point -- how do some of 3D printing's most fervent evangelists think about it? It is a point of pride for DIY hackers that computers and networks are tools that liberate creativity. The more we share, the better. But does that premise hold true when we are sharing the code to manufacture lethal weapons? Do we really want to live in a future in which gun control is effectively impossible?

Make Magazine's "Ultimate Guide to 3D printing," published this winter, bursts with the same unconstrained enthusiasm once associated with the Homebrew Computing Club where Steve Jobs and Steve Wozniak presented the first Apple computer. The smell of revolution is in the wind! Manufacturing has been democratized! There are no limits to what you can fabricate in your living room! In his editor's note, Make publisher Dale Dougherty writes that "The dream of 3D printers stirs our imagination ... like the first personal computers 3D printers were signposts for an unsettled territory, awaiting the pioneers to explore the future."

Make's guide has everything an aspiring 3-D printing hobbyist needs to know to get started. Detailed reviews of printers. Directions to where one can download product designs. The best software. Do's and don'ts advice. Make Magazine, a combination bible/how-to-FAQ/manifesto for the Do It Yourself movement -- has gone all in on the 3-D printing future.

But skim through the pages looking for any information on how one might 3-D print one's own gun, and you won't find any help. Nor will you locate any in-depth discussion of 3-D printers as potential weapons factories in former Wired editor-in-chief Chris Anderson's recent book, "Makers: The New Industrial Revolution."

Members of the Maker community, understandably, prefe  to focus on new technology as a tool for personal empowerment. When pressed, they will acknowledge that 3-D printers can just as easily be used for less joyful purposes. But that's just how it is, how it has always been with any new technology. One reason why we might not see much hand-wringing about the negative consequences of the spread of 3-D printing technology is that it simply doesn't do much good to worry about it now. That oh-so-slippery genie is once again way out of the bottle.

"I see this as just another example of the power of general-purpose technologies (from the PC to the Internet)," says Anderson, "which empower people to use them in any way they want, both good and ill. We've got decades of experience with these, and in general we tend to regulate the use, not the technology."

"In any case. I really don't see how you can restrict the technology," says Anderson. "It's open source and out there globally from hundreds of sources, small and large."

"Most revolutions, even technological ones, enable positive and negative outcomes," Dougherty told me. "A 3-D printer potentially adds new options for manufacturing weapons. Perhaps the concern is that it could be easier for more people to manufacture guns more easily. However, it is certainly much easier for people to buy guns than to make them, and there are plenty in circulation."

Science fiction author and Boing-Boing co-editor Cory Doctorow has thought long and hard on how society can and should grapple with the destructive potential of new applications of computer technology. It's a staple of both his fiction and his public speaking. He acknowledges that the weapons-making potential for 3-D printers is "scary" and supports seeking solutions that would offer some security in a 3-D-destabilized future.

But the nightmares are not limited to printed guns, he notes, suggesting that the same 3-D printing technology could be applied to manufacturing "solid state meth labs" and even intelligently designed viruses and bacteria. Focusing too much on what a 3-D printer can or cannot do misses the big picture. The printer is just another computer peripheral, he says. The real challenge is the unlimited utility of the computer.

In the past, says Doctorow, "not only was it possible (for a long time) to regulate printing presses and machine shops, they were also specialized equipment that only certain people would possess and know how to use. We could figure out who was printing the fake money by tracing the press, and also by tracing people who were likely to know how to operate it."

"Today, with general purpose technology, we have two problems: 1) The technology is in everyone's possession, and so the fact that mischief is made with a computer tells you nothing about where it was made. 2) The technology is programmable and so allows for replay of others' skilled manipulations. You don't have to know how to write ... code, just how to run it."

"I hope we can come up with effective solutions to these problems ... but the key word there is 'effective.' A comprehensive, nip-it-in-the-bud ban on the technology to produce 3-D printed guns is a ban on computers. Because there's no other way you could accomplish it."

What Doctorow is saying is that you can't feasibly limit a computer from doing any particular task. The music business tried digital rights management to stop people from sharing music and discovered, to its dismay, that the strategy just wouldn't work. The same will be true, says Doctorow, if governments try to craft gun control regulations that put technological limitations on what can or cannot be printed from a 3-D printer.

Recent events have given us something of a test case of this thesis. As Forbes' Andy Greenberg reported in December, Bre Pettis, the CEO of MakerBot, a leading manufacturer of cheap 3-D printers that also maintains Thingiverse, a popular repository of open-source design code, noted in a blog post in October 2011, "I'm not convinced that 3D printing is easier than buying a gun illegally, but it does offer another avenue for weapons to enter the world. Will the next war be armed with 3D printers? One thing that’s for sure, the cat is out of the bag and that cat can be armed with guns made with printed parts."

But in December 2012, shortly after the Newtown massacre, MakerBot announced that it would no longer allow users to upload gun designs to Thingiverse. Cat -- back in the bag!

So what happened? Cody Wilson and the activists at Defense Distributed immediately created DefCad, a safe haven for anyone to upload gun design code. In the month since, thousands of people have downloaded the code to make high-capacity gun magazines. Any attempt to extirpate all such code from the computers of the world would be yet another hopeless game of Internet whack-a-mole. Cat -- running wild and free, armed and dangerous.

Government action to prohibit the uploading of gun design code would be a more serious matter than MakerBot's voluntary-imposed restrictions, but given what we know about how easy it is to copy and distribute digital information on the Internet, ultimately, it would probably be just as ineffective.

On Jan. 16, a few days after Defense Distributed released its gun magazine video, New York Rep. Steve Israel announced that he would introduce legislation prohibiting the manufacture of high-capacity magazines via 3-D printers. Michael Weinberg, a staff attorney at the digital rights advocacy group Public Knowledge who has focused on the intersection of intellectual property law and 3-D printing, echoed the Maker community when noting that such technology-specific legislation would be extraordinarily difficult to enforce. It would be better, he said, simply to ban anyone from making a high-capacity ammo magazine by any means, and then penalize those who do so, after the fact.

Of course, that doesn't solve the basic problem, which is that, in the 3-D printing era, if you have the will to make a gun, you will eventually be able to find a way, more easily than you have ever been able to do so before, just as, if you really, really want to see that episode of "Downton Abbey" that was broadcast in the U.K. six months ago but still hasn't been shown on U.S. TV, you can find it on the Internet, if you look hard enough. And yes, that is scary. For those Americans who are looking for ways to reduce access to guns, the next wave of 3-D printing poses an ironic, and perhaps tragic conundrum. Just as social pressure is starting to once again rise in support of gun control, achieving such a goal may be getting harder than ever.