Obama was lip-synching too 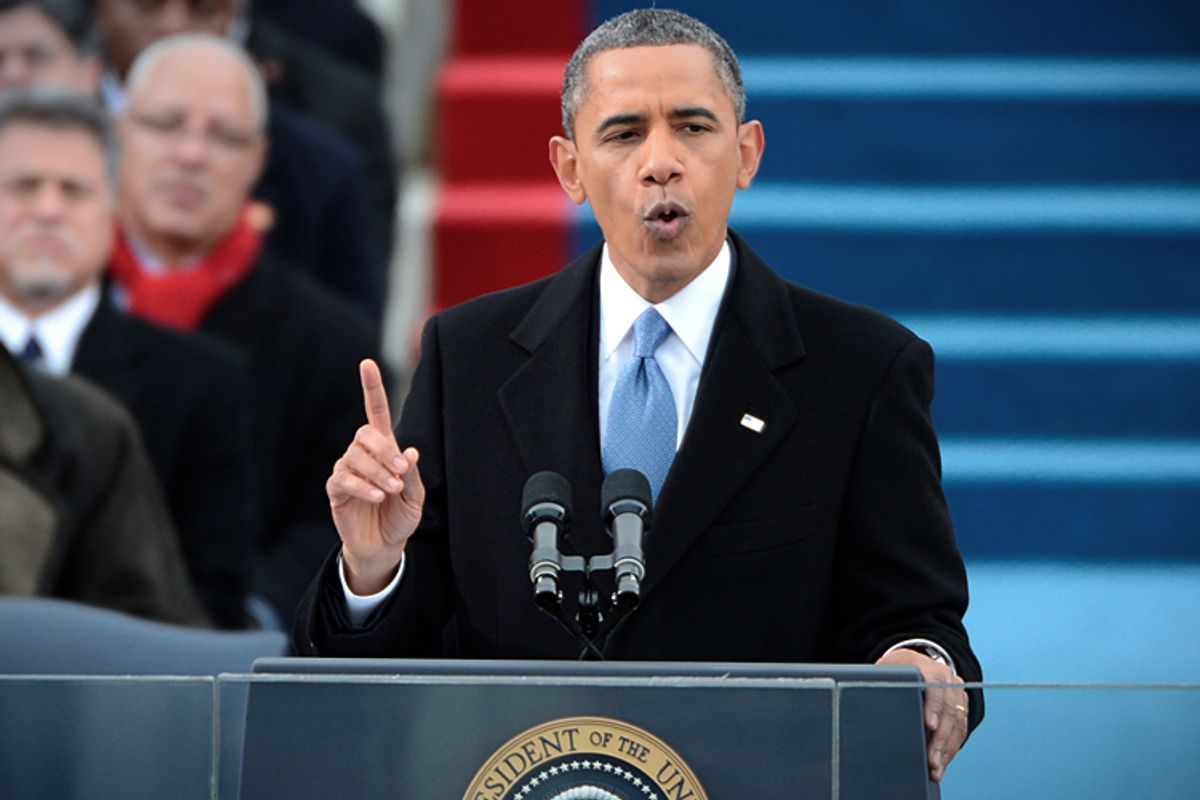 Confronted with the devastating news that Beyoncé maybe or probably lip-synched her killer rendition of the national anthem at last week’s presidential inauguration, I then had to ask myself whether I cared, or why. Performing outdoors in cold weather is famously challenging, and “The Star-Spangled Banner” has defeated many singers over the years. I’m not a huge Beyoncé fan, but she’s a long way from being Milli Vanilli, or even Madonna, meaning the kind of pop act where the packaging is more important than what’s inside. No one doubts that the lady can sing, and the voice we heard was hers, even if it wasn’t live. I don’t recall any outrage about Yo-Yo Ma and Itzhak Perlman playing along to a recording of that John Williams quartet at President Obama’s first inauguration in 2009.

But it was clear from the reactions in comments threads and social media that many people felt let down by learning that what they had taken for a thrilling live performance, one that seemed to capture the patriotic emotion and possibility of the moment, was after all just another simulation. I can understand that disappointment, that thwarted hope for something real – but I don’t think its true target is a pop singer who panicked about hitting the high notes. The star of last Monday’s big show was also lip-synching, in a sense, mouthing the lyrics to greatest hits from the songbook of Franklin D. Roosevelt and John F. Kennedy. It sounded great, especially to those of us who voted for him despite grave misgivings. But was it real?

We’re only days into Barack Obama’s second term, and he’s in real danger of becoming all but irrelevant, of being remembered as an interesting but minor president whose principal importance was symbolic. Oh, don't get me wrong -- tt was definitely stirring to hear Obama drop the tone of bogus bipartisan conciliation in a fiery and forthright inaugural address that was without any serious doubt the most “liberal” presidential speech delivered since the days of Lyndon B. Johnson. (Even if, as David Sirota has pointed out, the positions articulated by Obama are solidly in the mainstream of popular opinion, and it’s only mainstream media discourse that considers them left-wing.) But don’t hold your breath waiting for any of that stuff he talked about to become reality.

Presidents almost invariably have a more difficult time enacting major policy initiatives in their second terms. They may have been personally set free from short-term political consequences, but no one else in Washington shares that liberation. As the months pass toward another electoral cycle, second-term presidents look more and more like lame ducks. The likelihood that Obama will go into the history books as a “transformational figure” who reshapes American politics has dwindled to nearly nothing, if it ever existed in the first place.

One can reasonably contend that these are big, impersonal factors, and not Obama’s fault. He came into the White House in 2009 in the wake of a devastating economic crisis, with the wind of public opinion at his back and an immense if incoherent public appetite for constructive change pushing him onward. None of that mattered once he ran into the poisonous and apparently irreparable divisions of American political life, and the Washington-specific combination of corruption and dysfunction that has clogged up the legislative process like the intestines of a dying animal. Obama faced an entrenched, vicious and hostile opposition throughout his first term, which made no secret of the fact that its primary goal was to deny him a second. That opposition was defeated in November, though hardly decisively, and has retreated into soul-searching and wound-licking. Now the president has a theoretical opening – perhaps a year, or a little more – to address the innumerable problems that are dragging our country toward the abyss. You and I both know that isn't nearly enough time, and we're all too distracted with other things. You can bet Obama knows it too.

I do not doubt Obama’s intelligence, sincerity, decency or judgment (although I’ve never felt entirely certain about his political principles), and I’m not here to argue the lefty case that he’s been a total disaster or has accomplished nothing of merit. As messy and imperfect as the Obamacare law is, it represents a big step toward universal coverage -- and much as Republicans may kick and scream, it’s too late to undo it now. Obama has restored sanity to environmental regulation and federal oversight of science, appointed two moderate female judges to the Supreme Court and rolled back the ludicrous “don’t ask, don’t tell” policy. He has presided over unexpectedly rapid change on the explosive issue of same-sex marriage, although in that instance he has followed public opinion rather than leading it. (The language of Obama's inaugural address suggested that he understands that the attitudinal shifts that made the election of a black president possible have also led to widespread acceptance of lesbian and gay relationships.)

But as I wrote a few weeks ago, on the issues of gay rights and women’s rights America seems to be entering an unstable Missouri Compromise-type period that recalls the status of slavery during the prelude to the Civil War. In an eerie echo of those bygone days, a marriage that is fully legal in Maryland can have no standing whatever across the river in Virginia. Along with contentious issues relating to climate change, energy policy and gun ownership, those sex-and-gender questions carve a rift into the body politic that threatens to tear the country apart. I’m not sure that Hercules or Superman could stop that from happening, let alone a black guy from Hawaii whose middle name is Hussein.

So, yes, the biggest part of the problem is that America has become ungovernable, or close to it; in my darker moments I’m convinced that things have to get worse on that front before they get better. But I don’t think we can let the Lip-Syncher-in-Chief off the hook that easily, at this halfway point in his presidency. He has morphed from a bipartisan consensus-builder into a torch-bearing, true-blue liberal, and that can only be an improvement, seeing how the first incarnation worked out. But even in the wake of Hurricane Sandy and Sandy Hook, two events that perceptibly moved the dial of public opinion on critical issues, you can feel the possibility of change slipping away. Obama handled them masterfully as political theater and photo ops, and maybe that’s what we get by way of leadership these days.

If the Obama administration ever had the opportunity to launch a Manhattan Project-scale effort to build a 200-mpg car or a solar electrical grid (or whatever the big new discovery will need to be) and break our toxic dependence on fossil fuels, it no longer does. While Obama has paid lip service to the issue throughout his career, his policy changes have been minor and incremental. In our grandchildren’s time, when ecological catastrophe is widespread and portions of the planet become uninhabitable, they will curse our names for seeing the future so clearly but failing to act.

Obama has always favored single-payer healthcare in theory, and he’s more than smart enough to understand that it’s the only way we’re ever going to control costs while providing care to everyone. But he has never displayed the will or courage to pursue it seriously, in the face of the insurance industry, Big Pharma and the Iago-like whisperings of Rahm Emanuel. Even now, as Newtown begins to fade out of the news cycle a little, you can feel all the purple-state Democratic senators who face 2014 election campaigns backing away from an assault weapons ban, or any other serious gun reform. Obama is likely to leave office having expended a lot of rhetoric on the issue with almost no result. (I predict we will see a new self-enforced ratings system for the video-game industry, some tweaking on background checks, and that’s about it.)

To go a bit “Zero Dark Thirty” on you, Obama has never shown the slightest inclination to rein in the exaggerated executive powers of the Bush-Cheney era, or the super-secret surveillance powers of the post-9/11 national security state. He may have ended the practices of torture and rendition and closed at least some of the CIA’s secret prisons, but we really can’t know any of that for sure. What we do know is that he has ramped up the drone wars in Afghanistan, Pakistan, Yemen and elsewhere, and has claimed the right to kill any civilians he doesn’t like, including American citizens, anywhere in the world, on secret evidence and on his sole authority. Most of the president’s liberal defenders, who would have been outraged had George W. Bush done those things, have shrugged this off – and clearly this was one area where Mitt Romney found himself in total agreement.

On both national security and Obama’s handling of the economy, you can’t claim his hands were tied. He absolutely had the power to set a progressive new course and didn’t use it – unless, that is, you want to take the cynical position that no president these days truly possesses the power to stand up against Wall Street and the big corporations. (It’s an unhappily plausible view.) As Paul Krugman has consistently reminded us, Obama made clear choices at every step in his response to the financial and economic crisis, and chose to leave control of financial policy in the hands of the same Wall Street geniuses who brought us to the brink of apocalypse.

Throughout his career, Obama has been a cautious, calculating politician. Even when he has adopted the rhetoric and manner of a more prophetic and progressive leader, he has deliberately steered away from the kind of far-reaching liberal policy agenda he now claims to be embracing. He’s always done what Beyoncé did, relying on the backup track instead of trying to hit those high notes in the cold. Those instincts have helped him repeatedly win elections, bedevil opponents and bewilder supporters. But he’s no longer running for anything, and the beginning of the end of his presidency is at hand. Will he be remembered as a president who changed America, or just as an amorphous symbol of changes that were happening anyway? Is it too late for him to sing the song for real?