When the law won't call it rape

If there's confusion among the public (and politicians) about rape, baffling, conflicting state laws make it worse 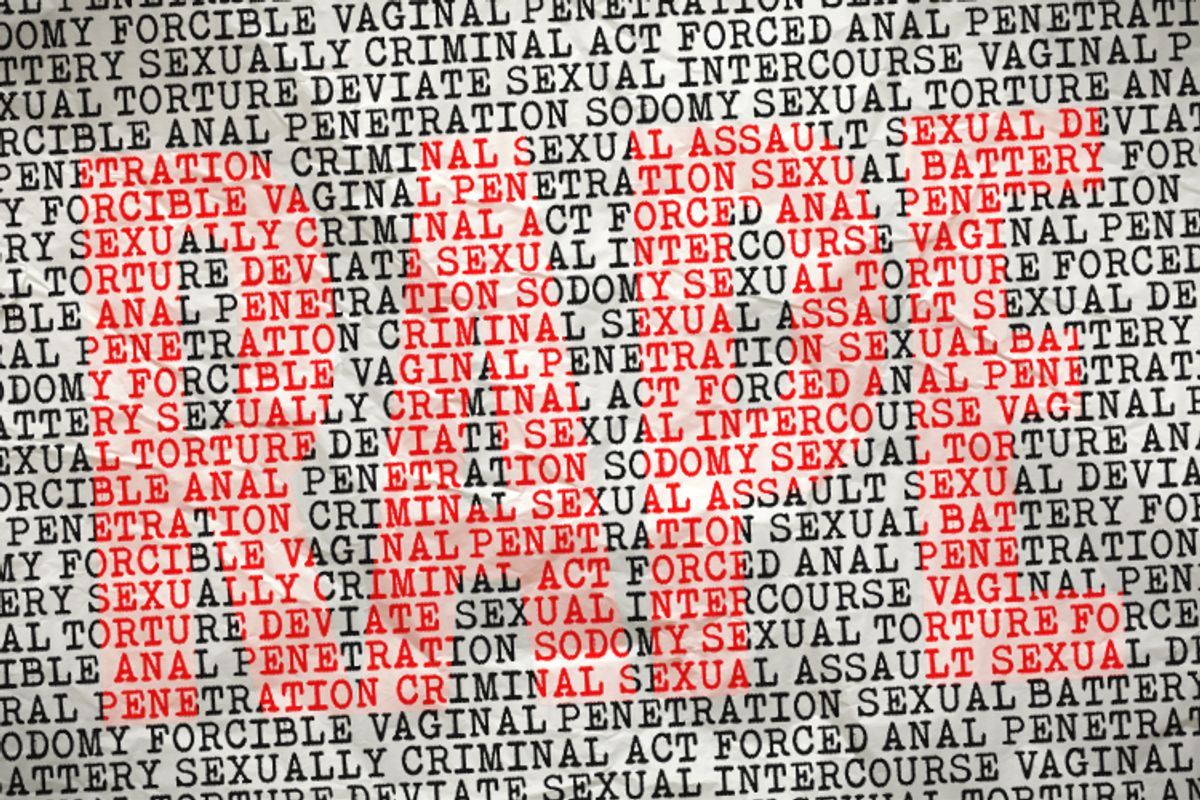 The night of August 18, 2011, 25-year-old Lydia Cuomo could barely sleep. The next day was her first day of work teaching second grade at an elementary school in the South Bronx. She’d just landed the job a few days before, and she was pumped. In the morning, she planned to get a ride with her new principal, who also lived in upper Manhattan’s Inwood neighborhood. While waiting outside of the principal’s home, off-duty police officer Michael Pena approached her. He asked for directions to the subway, then showed her his gun, and pushed her into an alleyway, where he forcibly penetrated her with his penis — orally, anally and vaginally. (It's usual practice to conceal the name of a rape victim in news reports, but in this case, Cuomo preferred to be identified. "I want to take the most negative thing that ever happened to me in my life and turn it into something positive," she said. "At the end of the day this is my story and attaching my name to it allows me to own it and take back what happened to me.")

It seems fair to call all three of those acts “rape.” But the legal definition is more complicated than that. Under New York state law, rape is defined as forcible vaginal penetration. Forced oral and anal contact both go under the term “criminal sexual act.” If the same crimes had occurred elsewhere, they might not legally be considered rape at all. Twenty-five states and the District of Columbia have stopped using the word “rape” in their criminal codes entirely and instead use terms such as “sexual abuse,” “sexual assault” and “criminal sexual conduct.” This variety of language exists in a country in which the word "rape" is becoming increasingly politicized and where politicians qualify rape as “forcible” or “legitimate,” intimating that other times it’s not. Because the laws — and many lawmakers — differ so wildly on the meaning of rape, it can be hard for us as a society to develop a shared understanding of what it actually is.

In New York, Michael Pena’s case went to trial in March. The charges included rape, criminal sexual act and -- because he threatened Cuomo with a gun during the attack -- predatory sexual assault. Cuomo testified that she knew she had been penetrated because it hurt. Accounts of the trial say an eyewitness reported seeing Pena push into a woman in the alleyway. Another witness testified to seeing “joyless sex.” Physical evidence is not required for proof of rape, though reports of the trial say Pena’s DNA was found on Cuomo’s underwear. Pena’s attorney, Ephraim Savitt, maintained that while Pena had attacked Cuomo, he hadn’t vaginally penetrated her.

When the verdict was announced, Cuomo said she just lost it. “It was like, oh my god. I’ve sat through this. I’ve waited for this. And this jury just told me ‘you were sexually assaulted, but you weren't raped because you couldn’t remember the color of a car.’ Apparently there was a car in the alleyway. I honestly don’t remember a car at all. I was in shock. There was a gun pressed to the side of my head. I don't need to justify it. It's just insulting. It was offensive. And it was just devastating to think ‘I might have to relive this again.’”

Others also found the verdict preposterous. Jennifer Long, the director of AEquitas, an organization that studies laws dealing with violence against women, said the case showcases how bias can be present among members of a jury. “One can speculate the reasons why they chose to convict of maybe the perception of the lesser crime,” said Long. “Whatever the reasons were for the outcome, it really belies the evidence.”

In New York, the sentencing requirements for criminal sexual act and predatory sexual assault are just as heavy as what’s required for rape. Pena was sentenced to at least 75 years in prison, and he later pleaded guilty to rape. But the fact that the different forms of penetration went under different names angered some policymakers — specifically, Queens Assemblywoman Aravella Simotas. She’s in the process of introducing a bill to the state legislature that would place all forced sexual penetration under the term “rape.”

“Rape is a very emotionally charged word,” said Simotas. “It means a lot to victims and it means a lot, I think, just to society. People whom I’ve spoken to — victims and their families — they all, if they're violated in this way, if they're forced to engage in a sexual act against their will, the word they use is 'rape.' They don't use ‘sexually criminal act.’ People don’t even know what that means.”

Simotas said the bill has bipartisan support, and she hopes to get it passed this session. But even if a wider legal definition of rape is adopted in New York, there’s no guarantee the public will understand rape better. “What the legislature does is a factor, but it's not the only factor in how society conceives of the crime,” said Michelle Anderson, dean of the law school at the City University of New York and a scholar on rape law. “It's an amalgam of popular media, consciousness being raised by non-governmental organizations and public interest organizations, sexual education — there are a lot of factors that influence how a society conceives of rape.”

Meanwhile, other states have purged the word "rape" from their codes entirely. The first to do so was Michigan in 1975 — it’s now one of 25 states, along with the District of Columbia and the federal government, that don’t use the word in their codes at all. The idea of the movement was to have the public think of these crimes not as being about sex, but about violent assault.

The differences between states’ laws go beyond the linguistic. For example, laws vary in terms of whether penetration is required to prove rape or if contact is sufficient. They also differ in how they define consent, and whether the victim’s silence indicates a lack of consent — or whether a person has to explicitly say "no." Jennifer Long of AEquitas said codes can differ by level of complexity, as well. “Some jurisdictions have neater, simpler laws, and some are much more complicated — but they may all cover the same conduct.”

Cuomo says her attack may be somewhat easier to talk about because, under New York law, she was raped. If she’d been penetrated only orally, not vaginally, she’s not sure how she would have handled it. “The problem with that is it would have been harder for me to talk about … because it's not called rape and because it's sort of hidden in the closet … I wouldn't have felt as open, which is weird, because that was definitely the hardest piece for me.”

Part of the problem is that in the earliest doctrine surrounding rape, the law didn’t account for oral penetration at all. If you go back to biblical injunctions, rape was considered a theft of property, rather than the invasion of an individual. The theft was that of a woman’s virginity, which belonged first to her father and then to her husband. “It's a very different way of conceptualizing what the harm is,” said CUNY professor Michelle Anderson. “Through time, the question of what the harm of rape really is … has evolved.”

A new federal definition helps. The adoption of a more standardized definition by state legislatures would help more. Lawmakers may look to new revisions in the sexual assault portion of the Model Penal Code. That’s the document created by the American Law Institute in 1962 in an attempt to standardize criminal codes across jurisdictions. Its definition of sexual assault is now woefully out of date. However, a group of scholars, prosecutors and judges from around the country are examining it, with revisions expected in 2014.

While policymakers think about the best words to use, survivors like Lydia Cuomo are figuring out their own ways to talk about what happened. “I think that speaking out in some way gives me a lot of power over my case,” said Cuomo. “The more I talk about it, the more control it gives me. And at the end of the day, rape is about control. It's this loss of control that happened. So it feels really good to be able to talk about it.”

And she thinks that other people need to be able to talk about it, too — and to not be afraid of using precise language. “I think a lot can come from calling something what it is and talking more openly about it,” said Cuomo. “Some people say, ‘Oh, it's just semantics.’ And I do think it is semantics at the end of the day, right? But I think the semantics are important.”

Stephanie Hughes is a radio producer for WYPR, the NPR affiliate in Baltimore.  She’s working on an audio version of this story for the radio show “Life of the Law.” You can find her on Twitter @stephanie_h