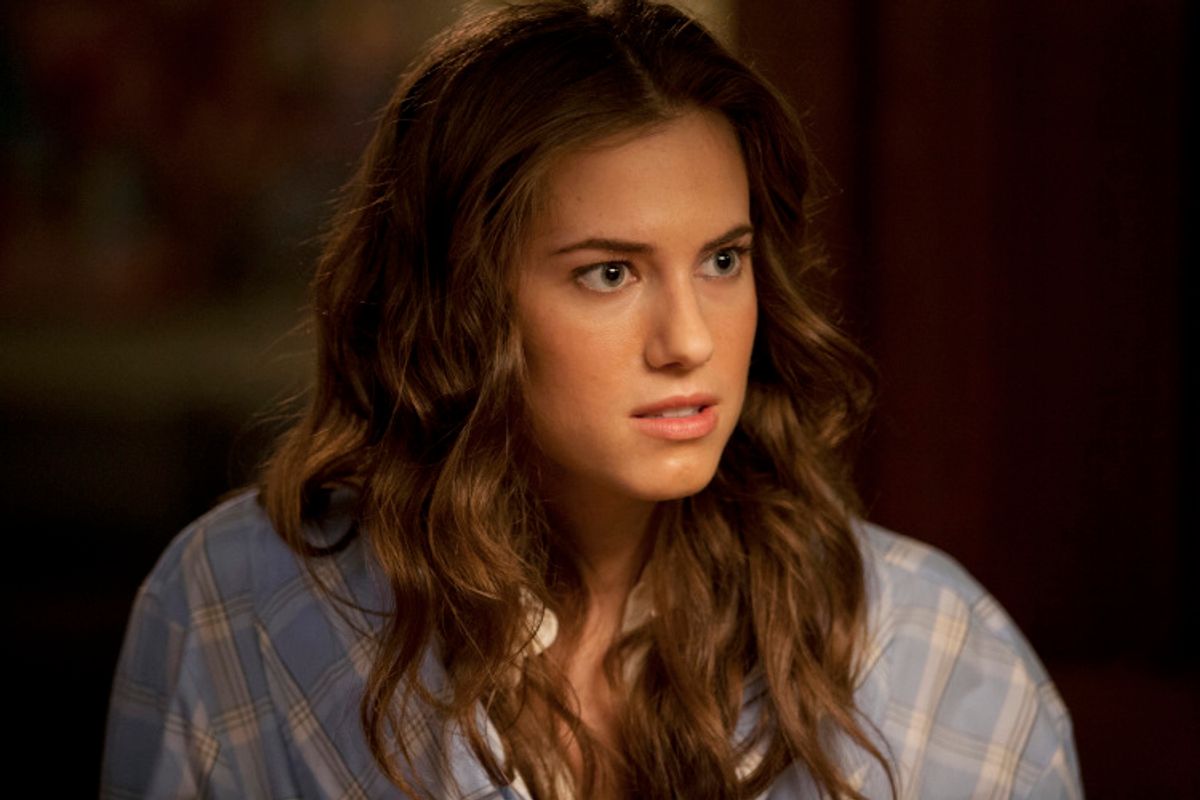 Last season on "Girls," Marnie, the uptight, beautiful one played by Allison Williams, was so turned on by her flirtatious encounter with a hugely self-confident cad and artist named Booth Jonathan (Jorma Taccone) that she had to run into a bathroom for an emergency masturbation session. On last night's episode, Booth Jonathan appeared again, whisking Marnie to his apartment in Bushwick where he showed her his "Toad the Wet Sprocket"-influenced artwork and the two had doll-witnessed sex, aptly described by  Taccone as being in the "starfish position." Williams spoke with me about what Marnie sees in Booth, the improvised parts of the sex scene, and the "you're a bad friend!" fight her character has with Hannah.

Talk to me about the sex scene with Booth Jonathan.

That sex scene makes me laugh so hard. We laughed throughout filming it. That freaking doll.  The set direction on our show is just so brilliant every day, and that was really at this amazing apartment in Bushwick, which is funny because Marnie vowed she never came to Bushwick and she did very readily. But walking into that bedroom and seeing that dummy standing in the corner, all of us had the same reaction, we were like, “She’s gotta be right here. She’s gotta be in the sex with us.” So as a result, the entire scene was just pure laughter.

So “Look at the doll,” that wasn’t in the script?

It was not in the script. We get influenced by the set constantly – set, costumes, surroundings, whatever – and we saw that thing and we were, like, “Oh, for sure it’s got to be in the scene. Absolutely, she needs to have something to say about that in that scene.” So that was all improvised.

Booth is surprisingly bad at sex for someone who is so confident that he's not.

That just makes him more colorful in my book.

When Marnie laughs at him, what is going on?

She’s laughing at the fact that it happened. I don’t think it’s occurred to her that he’s bad at sex. I think she’s just shocked that it happened with Booth Jonathan. And she’s star-struck. I mean, his house, and this is happening, it’s just crazy. And she’s in a lot of denial about him, down to the fact that when she emerges from that chamber with his art project, she tells herself and him that it’s brilliant, even though there’s no way, if she sat down at an exam at school, there’s no way she’d be able come up with anything interesting to say about it. But that’s the whole idea: that he’s more hype than he is real, and it’s interesting to watch that play out.

Were you actually listening to Duncan Sheik in that scene?

Not when we shot it, no. But the sound of televisions is very creepy, as it turns out. And it’s kind of deafening, and it’s on a frequency that you’re like, “I shouldn’t be listening to this. I’m never gonna be able to hear anything anymore.” And also the video, there was one of something rotting, there were maggots, it was very, very bizarre. It was dusty and that was really fun too, to be like, “Marnie doesn’t want to get dusty on his floor.”

Then Hannah shows up and yells at Marnie about being a bad friend, but in that moment Hannah seems totally out of hand.

See, now you’re starting to show me your cards. Now I know you’re a Marnie.

That makes me feel so defensive! I immediately wanted to say, "I’m not a Marnie!" But, in that scene, I did think Hannah was being crazy.

Well, for Hannah, the betrayal is not just a betrayal, it’s also a personal self-esteem blow. So she’s reacting a lot from a place of that, and I think Marnie just thinks, “OK. How can I get this person out of this apartment as quickly as possible?”

I think so. And I think if she put up a fight, it would’ve meant that Hannah was physically going to be standing at that island for longer. And here Marnie is trying to be cool, trying to talk about the ‘90s in a, like, analytical way, in an oversize men’s shirt, and then her coke fiend friend and a dealer and a gay friend who she’s recently tried to have sex with come waltzing in and Hannah’s wearing a neon green top with her nipples coming out of holes and Marnie’s like, “Oh, my God, these people are so uncool, they’ve got to get out of here.”

But it’s fascinating to me the way it was cut, because we shot it a lot of different ways. We shot it where Marnie was stronger, we shot it where she broke down earlier, broke down more. I full-out cried in a lot of the takes. And what we ended up with, which is often the case, is kind of ambiguous and in the middle somewhere, which is always what interests Lena the most.

Like in the finale, there’s that scene with Marnie and Charlie and they’re talking about having sex in the bathroom. We shot that a bajillion different ways, where I wanted to and he wasn’t sure, he wanted to and I wasn’t sure, and so when I watched it and it was so ambiguous, I was like, “Of course. No one knows what’s happening.” What we want to see in the scene at Booth Jonathan’s is Marnie being called out for a reason that she feels like is more than just what she’s being directly called out for. It’s a lot of things added up together and she knows that yes, she can’t necessarily take everything Hannah says seriously in that moment, but she does feel culpable to a certain extent.

Because Marnie did sleep with Elijah.

Yeah, absolutely. And I think she sees that as a betrayal. Instinctively in that scene a couple of times, improvisationally, I would say things like, “he didn’t even finish” like, trying to defend Marnie, and the fact that those aren’t in there to me is even more passive, and is a little bit more interesting. For Marnie it gets more complicated as it goes on, and what happens as a result of this fight to their friendship, to me was very challenging.

What is going on with her and Charlie?

She’s still stuck in that phase, post-relationship, where she just wants to know that no matter what, she’s still got him on a leash. It’s a very immature way of feeling about an ex. But it’s where she is. She just wants to make sure that when she’s counting her people, she’s like, “OK, I’ve still got Charlie, he’s a pathetic little puppy dog behind me, great,” and then the minute she sees him start being interested in someone who is better for him, Marnie starts to get really defensive of that and manipulative. And it’s just ugly what she does, but she does it. It’s just part of who she is.