Memo to Mamet: Stick to plays 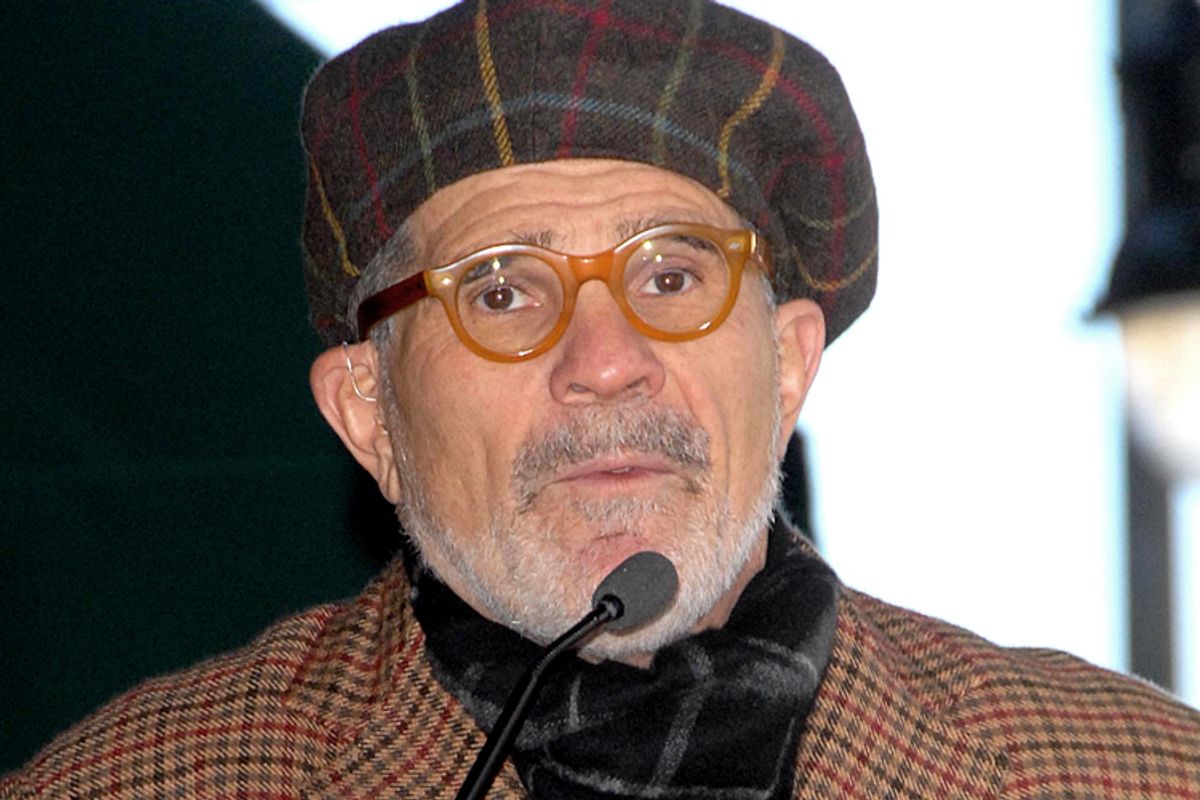 The very first two words of famed playwright David Mamet’s Newsweek over story about guns are “Karl Marx.” It continues thusly for another 928 words without any mention of firearms before he finally comes to the point of the essay about 14 paragraphs in. Michael Tomasky, writing for the same Newsweek-Daily Beast as Mamet, has already done a good job dispatching with Mamet's critical misunderstanding of Marx, so we’ll skip right to the part that’s actually about guns.

Mamet, the erstwhile liberal who saw the light and converted to the right a few years ago, is without a doubt a seminal writer of plays and films. But this essay, which lays out a pretty conventional case against gun control, crumbles on its shaky factual grounds.

There's a lot wrong here, so let's go one at a time. First, Mamet cites a familiar, though long-questioned statistic about gun defenses:

"On a lower level of abstraction, there are more than 2 million instances a year of the armed citizen deterring or stopping armed criminals; a number four times that of all crimes involving firearms."

The number comes from a 1990s study conducted by criminologists Gary Kleck and Marc Gertz, which is often cited by gun rights advocates, but often disputed by gun violence researchers. The 2-plus million figure (2.5 million in the original study) was based on a national telephone survey in which the researchers asked respondents if they had used a gun to defend themselves in the past year. Results were entirely self-reported with no way to to determine whether they were genuine.

When Harvard economist David Hemenway drilled into the numbers, he found critical methodological problems and inconsistencies. For instance, the study assumed that armed citizens kill or wound their attacker with a gun 207,000 times per year, but there were only 100,000 visits to emergency rooms for firearm-related injuries per year. And for the numbers to be accurate, women (the vast majority of whom do not own guns) would have had to fend off their attacker with a gun in 40 percent of all sexual assaults. It would also mean that victims of serious crime are three to four times more likely to possess a handgun during an attack than the offender. These are just a few problems Hemenway found, and other researchers found more.

A Department of Justice survey conducted at around the same time found the number of defensive gun uses to be about 108,000 annually, or about 18 times smaller than the 2 million number Mamet cites, and that includes police officers using weapons in the line of duty. Even Jeffrey Goldberg, writing “The Case for More Guns” in December’s Atlantic, discarded the 2-plus million number as overly bullish and settled on the 108,000 figure.

Next, Mamet deploys some twisted logic to try to discredit the notion that firearms sometimes lead to people accidentally getting shot:

"The Left loves a phantom statistic that a firearm in the hands of a citizen is X times more likely to cause accidental damage than to be used in the prevention of crime, but what is there about criminals that ensures that their gun use is accident-free? If, indeed, a firearm were more dangerous to its possessors than to potential aggressors, would it not make sense for the government to arm all criminals, and let them accidentally shoot themselves?"

This is a bizarre straw man. No one is saying criminals are better at using their guns than law-abiding citizens. What people who research gun violence do say is that the mere presence of a firearm increases the likelihood of someone getting shot -- having a gun inside a home increases the likelihood of homicide by three and suicide by five -- while that same gun has very little chance of being used to stop a crime. Crime is pretty rare and most of us will not be victims.

“The problem is not the gun being there at that almost impossibly rare moment; it’s what happens to that gun all the rest of the time,” Garen Wintemute, a public health researcher at the University of California, Davis, told me last month. And while accidental deaths from firearms have dropped, 850 people were still killed last year unnecessarily simply because a gun was present.

Next up, Mamet tries to make an empirical argument that cities with stricter gun laws have more crime:

"Violence by firearms is most prevalent in big cities with the strictest gun laws. In Chicago and Washington, D.C., for example, it is only the criminals who have guns, the law-abiding populace having been disarmed, and so crime runs riot. Cities of similar size in Texas, Florida, Arizona, and elsewhere, which leave the citizen the right to keep and bear arms, guaranteed in the Constitution, typically are much safer. More legal guns equal less crime."

It’s unclear it Mamet simply didn’t bother looking up the data, but there's nothing to support this claim.  As Andrew Sullivan points out, crime rates are often lower in D.C. and Chicago than in Miami, Houston, Dallas, Phoenix or Tucson, though the FBI warns against making direct city-to-city comparisons (that’s what Mamet is doing, though, so we’ll go along with it). That alone should discredit the entire essay, but we press on.

Next up, he takes issue with the Secret Service protecting President Obama’s children:

This is a strange argument that even the NRA has decided is “ill-advised,” but as Tomasky points out, it’s also a bit off. The law in question only provides protection to the children of presidents up to age 16, not "for life" as Mamet claims. And the law merely codified what had been a de facto practice for years.

Now we come to perhaps the most glaring and embarrassing error in Mamet’s essay:

"An assault weapon is that which used to be called a 'submachine gun.' That is, a handheld long gun that will fire continuously as long as the trigger is held down. These have been illegal in private hands (barring those collectors who have passed the stringent scrutiny of the Federal Government) since 1934... The so-called  assault weapons ban is a hoax. It is a political appeal to the ignorant. The guns it supposedly banned have been illegal (as above) for 78 years. ... Outside these few legal possessors, there are none in private hands."

For someone who professes to love firearms, Mamet reveals himself here to be shockingly ignorant about them. An “assault weapon,” as defined by the “hoax” of a ban now before Congress, pertains strictly to semi-automatic rifles, which deliver one bullet for every pull of the trigger. Mamet is referring to an entirely different class of weapons -- automatic ones.

If he’s trying to make a point about nomenclature here, he doesn’t state it, and the only semantic issue he does raise is stating that “assault weapons” used to be called submachine guns. No. Submachine guns are automatic weapons, the “sub” refers to the smaller caliber of bullets used. The distinction between automatic and semi-automatic weapons is critical, but he's either conflating the two or unaware of the difference.

Finally, the 1934 law he mentions doesn’t actually make automatic weapons “illegal,” just difficult to own. There are almost 500,000 machine guns registered with the ATF nationally, including over 30,000 in Virginia alone, though perhaps about only half of those were in private (non-law enforcement) hands.

Moving on, Mamet doubts the value of background checks before gun purchases:

Anyone applying to purchase a handgun has, since 1968, filled out a form certifying he is not a fugitive from justice, a convicted criminal, or mentally deficient. These forms, tens and tens of millions of them, rest, conceivably, somewhere in the vast repository. How are they checked? Are they checked? By what agency, with what monies? The country is broke. Do we actually want another agency staffed by bureaucrats for whom there is no funding?

As Matt Gertz notes, Mamet is apparently unaware of the National Instant Criminal Background Check System, which replaced the antiquated system Mamet describes almost 20 years ago with the passage of the 1994 Brady Handgun Violence Prevention Act. Now, background checks are instantaneous. According to the FBI, “More than 100 million such checks have been made in the last decade, leading to more than 700,000 denials.” But background checks do not apply to guns purchased anywhere aside from a licensed firearms dealer. Advocates now want to make them universal for all gun purchases.

Finally, Mamet argues for the presence of armed guards at schools. This is fine, though it sadly may not do much to stop school shooters. There was an armed sheriff’s deputy at Columbine, an armed guard at Lone Star College, an armed citizen at the Oregon Mall shooting earlier this month, and an armed citizen at the Gabby Giffords shooting, none of whom stopped the killing. Virginia Tech has its own police force with a SWAT team. And arming teachers could be counterproductive, as armed people trying to stop mass shootings can sometimes accidentally shoot innocents.

Any honest reading of the scientific research on gun violence concludes that more guns are not the answer to gun violence. If more guns were the answer, then the U.S., with its 300 million guns, should be safest country on the planet.