"The Americans": Rooting against America has never been so fun 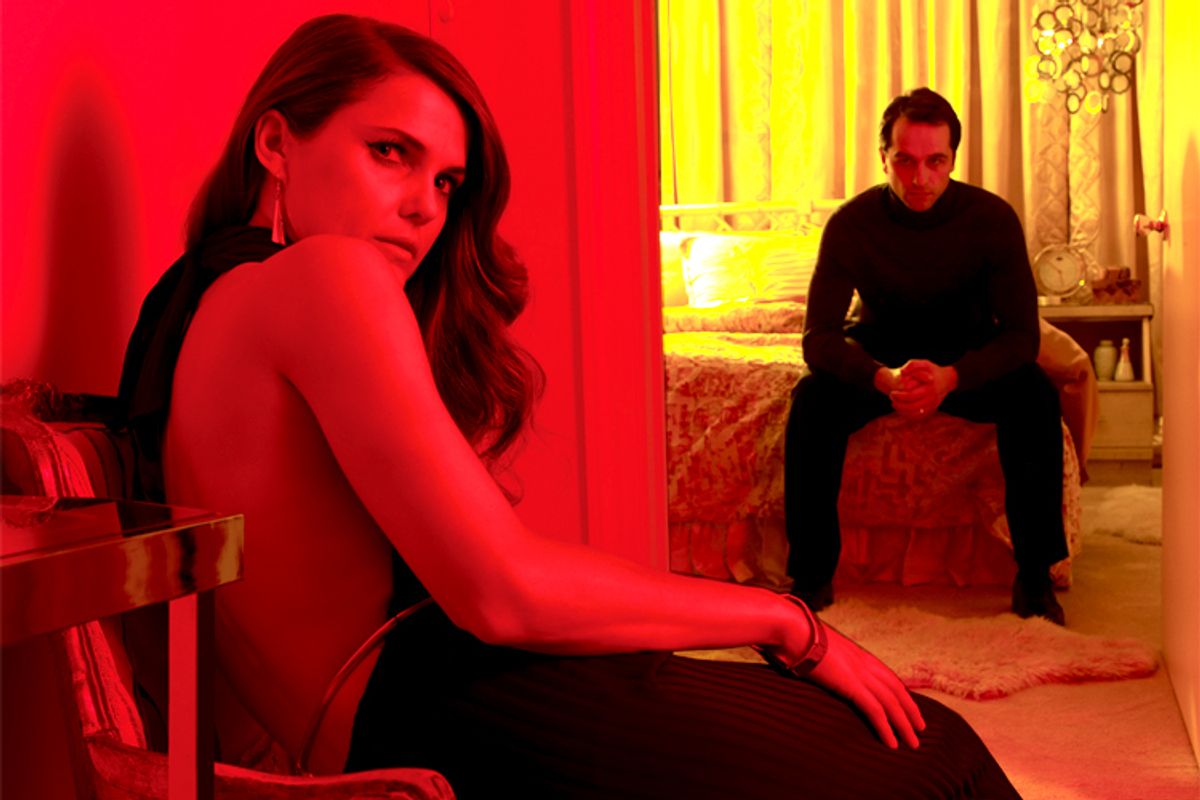 “The Americans,” FX’s wonderfully sly, ass-kicking new spy show, premieres tomorrow night and stars Keri Russell ("Felicity") and Matthew Rhys ("Brothers & Sisters") as Elizabeth and Phil Jennings, two Russian sleeper agents under deep, deep cover in 1981 America. The two began training in the early ‘60s, learning to speak English with no accent, to fight with no survivors. Paired together in their early 20s, forbidden from talking in Russian to one another, and told not to share their real identities, they were sent off alone, together to the United States posing as a young married couple. More than a decade later, they are balancing top-secret, ultra-dangerous Cold War missions with two kids, a house in the D.C. suburbs, and a travel agency. Their arranged, fake marriage, full of resentment, disagreements and passion, and characterized by complete dependency and entanglement, looks not so dissimilar from a knotty, real marriage.

Is the marriage and the four-square American life the deep cover, or the deep truth? Are the extramarital seductions, spy missions and devotion to Mother Russia the deep truth, or the deep cover? The matter of allegiances, to which aspects of their chimerical life the Jennings are truly loyal — which people, which countries, which truths — is the central motif of “The Americans”: It’s embedded right there in the title, which is a winking comment on who Elizabeth and Phil are pretending to be, but also, maybe, who they really are. “The Americans” is delightfully cunning, exactly the quality, along with fight scenes and ridiculous disguises, one desires in a spy show.

The series begins with Elizabeth in a trashy blond wig, seducing an FBI agent. (Or rather, the episode begins with Felicity giving a guy a hummer. Russell has been cast way against type here, and whether the tough-as-nails Elizabeth is all there is, or if some aspect of the gushy, emo warmth “Felicity”-watchers know Russell can put over is lurking inside Elizabeth too is one of the show’s more meta hall-of-mirror effects.) Elizabeth is fully dedicated to the motherland: She hates America, even as she loves her American children. She recoils when her kids talk about how “Russia cheats on nuclear armament” and fervently wishes they won’t  “grow up to be normal Americans.” (One of the nice resonances of “The Americans” is how Russian super-spies' hopes for their children are not all that different from those of yuppies.) Phillip, warmer, livelier, more charismatic, more smitten with his life partner is not as convinced of America’s evil. “What’s so bad about America?” he asks. “The electricity always works and the food is pretty good.”

And what is so bad about America? Perhaps the neatest trick of “The Americans” is that it turns our — Americans — loyalties upside down. Here are two extraordinarily dangerous Communists, being hunted down by a newly empowered Reagan administration, and we’re rooting for them. (The first episode skirts ambiguity by having the Jennings dealing with a rapist Soviet turncoat, who we can all agree is a bad dude; in the second, they start doing bad things to decent people.) This sleight of hand depends on a number of things — the likability of the actors, how good they look in their ‘80s gear, how badass they seem running around to “Tusk” —  but it seems to me the two most important are that we are currently living through a moment of great existential self-doubt about the inherent goodness of America, and specifically American foreign policy, and that “The Americans” is set in a moment of great historical clarity, especially with regard to American foreign policy. “The Americans” is a safe, period space in which to explore our very current self-recriminations.

“I see a weakness in these people,” Elizabeth says when she first arrives in America, giving voice to our own fears. Earlier in the episode Elizabeth has scoffed at visiting a new mall with the rest of her family. “It’s just a mall,” she says, the “materialistic Americans and their obsession with consuming things” is merely implied. As Elizabeth and Phillip do their best to undermine America and Reagan (the historically accurate reveal at the very end of the second episode is just too delicious: The truth really is stranger than fiction) we hope for their success, in part because they may have a point and in part because we know how this story ends: well enough for America that 30 years later, Russian agents seem pretty adorable. How cute are spies compared to terrorists? How quaint is socialism compared to Jihadism? How much more fun is it to complicate a war in which we were essentially right, than to puzzle over questionable wars whose meanings are, at best, still unclear? The answer, as if you didn’t know, is much, much, much more fun. "The Americans" is slightly anti-American cake, meant to be gobbled down from the comfort of our very American couches, and it tastes damn good.