When two guys married a tree

An art stunt with muddy ideas sparks an epic fight, leading to claims of homophobia, vandalism -- even prostitution 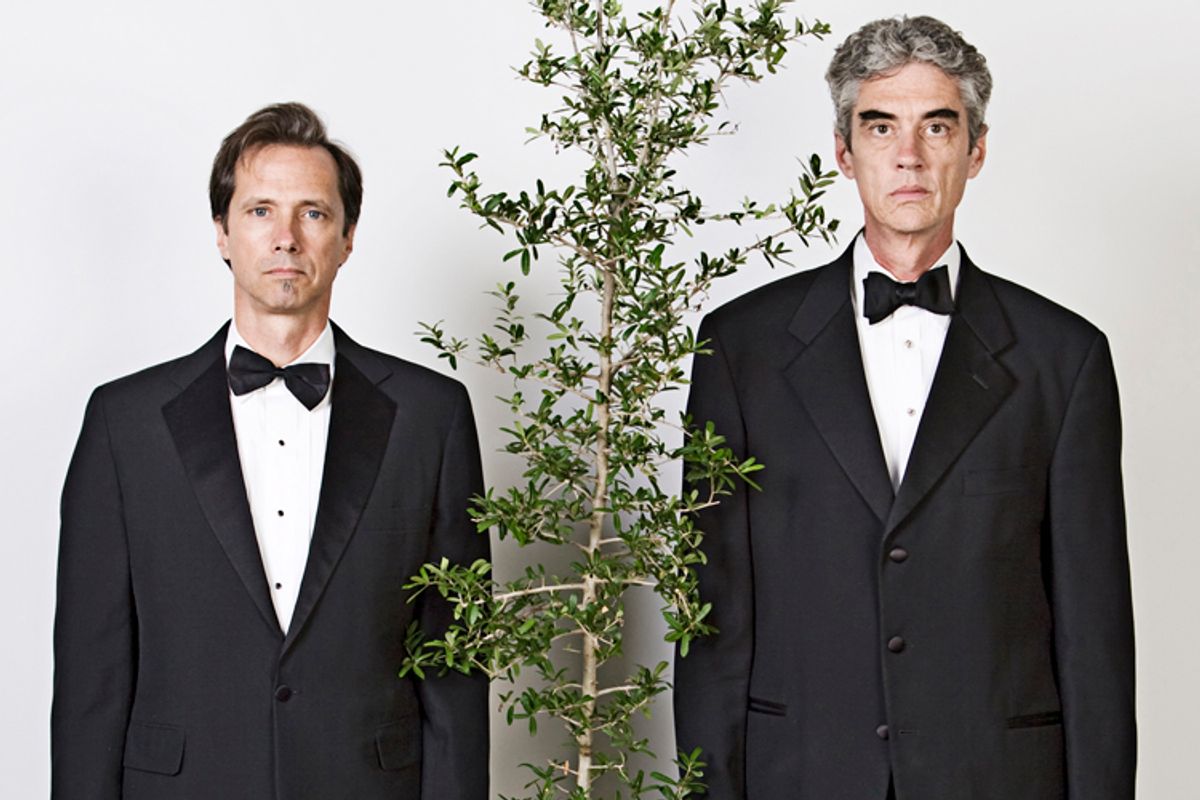 In June 2009, Michael Galbreth and Jack Massing, known as the conceptual art duo the Art Guys, put on tuxes and walked down the aisle together at a marriage ceremony in the sculpture garden of the Museum of Fine Arts Houston. It was nearly a year to the day after California’s Proposition 8, which sought to outlaw gay marriage, made it onto that state’s ballot, and gay marriage was, of course, still illegal in Texas. Not that it mattered. The two men getting “married” that morning were both heterosexual – in fact, they were both already married to women. As they approached the minister in front of gathered family, friends and local art lovers, the duo dragged behind them a wagon with a live oak sapling planted in a pot. Readings were recited, vows were spoken, and the guys slipped a brass shower curtain ring onto one of the naked branches of the little oak. The Art Guys proclaimed it all “art.” The piece was called "The Art Guys Marry a Plant."

Like many marriages, this peculiar union between two men and the (presumably) polyamorous plant wasn’t meant to be. Last week, there was a kind-of divorce. After scathing reviews, acts of vandalism, angry art patrons, and counter-protest art performances (not to mention an art critic who returned to prostitution after the ordeal), the Menil Collection — the Houston museum that had acquired the tree sculpture in 2011 — decided they had had enough. They dug up the plant and returned it to the Art Guys, unceremoniously ending one of the more bizarre art world episodes in recent memory.

The saga of "The Art Guys Marry a Plant" is something of a cross between Marcel Duchamp and TMZ, in which the context for an artwork’s meaning suddenly becomes a voyeuristic train wreck of loudmouth personalities caught on tape. The whole ordeal was kick-started by a simple accusation from an art critic: "The Art Guys Marry a Plant" was anti-gay marriage. “As far as Uncle Sam is concerned, [gay and lesbian couples’] unions have no more legal standing than the Art Guys’ marriage to a tree,” Houston Chronicle art critic Douglas Britt wrote in a review of "The Art Guys Marry a Plant." “Of course, it also inadvertently reinforces the ‘slippery slope’ argument that if we let gays wed, next we’ll allow people to marry animals, and so on.”

Britt’s point isn’t entirely unreasonable. The Art Guys claim the performance constituted a “real” wedding and that it was an effort to make a statement about abstract notions of cosmic and biological universalism. “When two people pledge to care for a plant in marriage, they create a unique bond which binds them closer than any spoken or written words,” the minister said at the wedding, sounding more like a stodgy Lorax than a homophobic bigot. But as Britt, who is a gay man, pointed out, what was missing from the Art Guys’ marriage equation – legality – is the precise point of conflict in the gay marriage debate. Did the wedding’s legal fakeness construe a mockery of the struggle to obtain those rights for gay couples, or was the Art Guys' piece making a mockery of the legal institution of marriage itself, asserting their freedom to love whomever or whatever they please by wedding a plant? Or, was the piece simply about what the curator who commissioned the piece, the Contemporary Art Museum of Houston’s Toby Kamps, said it was about: notions of “posterity” and “nature persisting while we perish.”

These questions should have framed the critical dialogue that surrounded "The Art Guys Married a Plant," but that’s not what happened. Instead, in June 2011, the Menil Collection, with Kamps as its new curator, acquired the tree, and the critical dialogue quickly spun out of control. Soon Houston, home of the nation’s sixth largest LGBT population, was in a state of hysteria over a somewhat silly piece of art.

The art critic Britt was at the center of the debate. After the Menil announced it would plant the tree on its grounds (just yards from the Rothko Chapel, which, during the 1980s, was the site of many memorial services for many people who had died of AIDS-related illnesses), the critic decided he would stage his own counter-performance art piece. He sent out a request looking for female art critics who would be willing to participate in an artwork he called "The Art Gay Marries a Woman." Everyone rejected his proposal. (“Artist [Laura] Lark, a divorcee, was thrilled at being my fourth choice for a wife until she remembered she gets alimony,” Britt wrote on the website 29-95.com.) But Britt finally found a willing accomplice, Reese Darby, a local art publicist. On Nov. 16, 2011, before the amateur strip contest at the bar Tony’s Corner Pocket, Douglas Britt married Reese Darby, sealing the vows with an exchange of ring pops. He became Devon Britt-Darby, and six months later they were divorced pro-bono by Reese’s father, a civil rights attorney.

Britt wasn’t the only person upset with "The Art Guys Marry a Plant." After the Menil acquired the piece, a quieter, backroom campaign was launched against the artwork by a handful of powerful Houston art world brokers. Then the vandalism began. In December 2011, the tree in the Menil’s garden was snapped in half. Rumors pointed to Britt or another opponent of the piece, Houston gallery owner Hiram Butler. The morning of the attack, the Art Guys had an altercation with Butler outside his gallery, and according to the police report that was filed after the incident, they called the dealer a “coward and an evil fuck” and “an unhappy homosexual.” It wasn’t something the Lorax would say, but did it mean the art was homophobic? The Art Guys had maintained all along that they supported gay marriage, but by now what the artists said hardly mattered.

The most likely perpetrator of the art vandalism was Douglas Britt. The newly married gay man had posted videos on YouTube showing him messing with the tree, slipping his wedding ring pop onto a branch for a photo shoot and sprinkling a mix of his and Houston-based conceptual artist Dario Robleto’s hair on the ground around the oak. But Britt-Darby was out of town during the incident. He had recently posted a bizarre YouTube confessional in which he explained that now that he was married he needed to take a leave of absence from his job as the Houston Chronicle’s art critic in order to re-create a crystal-meth-infused road trip he took in his youth. He would return to prostitution, he announced, and Britt launched a website that archived his writings about "The Art Guys Marry a Plant," advertised his escort prices, documented his philosophy of casual sex, and featured heaps of photos and videos of the chiseled shirtless critic flexing, taking punches to the stomach, or ranting about the Art Guys’ tree. After the video was posted, the Houston Chronicle granted Britt-Darby a permanent leave of absence.

As Britt-Darby traveled the country, posting videos of himself talking to his cellphone camera against the backdrop of a photo of the Art Guys’ tree, the Menil continued to bear the brunt of less-flamboyant protest. There were additional acts of vandalism and board members continued to feel pressure from some members of Houston’s LGBT community who wanted the tree removed.  By the time the museum issued a statement explaining that, concerned about vandalism, they were returning the tree to the Art Guys, "The Art Guys Marry a Plant" had taken on a new life outside of the context of its initial performance and the intentions of the artists. It had become a kind of symbolic touchstone of a broader debate about gay marriage and an art museum’s complicity in what was, depending on where you stood on the piece, the preservation of free expression or complicity in hateful bigotry. It was the tree that turned two typically aligned communities – art and LGBT – against each other.

Maybe the Art Guys were asking for it. After all, much of their previous work – like swimming in and drinking water from the murky Buffalo Bayou in 2002 to commemorate the Clean Water Act of 1973 or attempting to pre-auction their own cremated ashes – is about attempting to push the boundaries of the definition of art while poking at institutional or bureaucratic inanities. They have always had a knack for drumming up publicity, and despite their sexual orientation, there has also been a kind of unspoken homosexual tension running through their performances – the two guys in suits parading around together with boyish grins, indulging together in some conceptual stunt. Before the plant, none of this was construed as being homophobic or even about homosexuality at all, but unlike some of their other projects, "The Art Guys Marry a Plant" was a conceptually and politically muddy work. They did float connotations of gay marriage only to greet them with a half-shrug and a half-wink.

Still, by the time the Menil decided to rid itself of the controversy (although, just as the Art Guys insist their tree wedding was a “real” marriage, the museum insists the piece is still technically in its collection), what "The Art Guys Marry a Plant" did and didn’t mean was hardly the point. One meaning had eroded another, the performances and the protests that surrounded the original piece had become subsumed into the art’s own symbolic meaning. It was “a McCarthyist witch hunt for meaning,” as one Texas artist described the ordeal to me, a critical survival of the fittest.

“The Menil seeks to engage in a vigorous conversation about contemporary works of art and their subjects,” the museum said in its statement about removal of the tree, pointing to a current exhibition at the museum titled "The Progress of Love," which explores how media, technology and capitalism have affected the conception of love in Africa. And yet the silence now from all the parties involved – the artists, the museum and the critics who all refuse to speak about "The Art Guys Marry a Plant" – suggests that vigorous conversation about some subjects must either be pointed, clear and digestible or it is just too hot to touch. Douglas Britt shredded taboos with his antics, just as he ushered in new ones. And his performance was enough to leave a respected American museum standing over an empty hole in the ground with its tail between its legs.

As for the Art Guys, they told the Houston Chronicle they want to return to how they operated at the beginning of their careers, “doing things out in public, away from the paradigms of galleries and museums.” It’s hard to blame them for wanting that.

Peter Simek is the Arts Editor for D Magazine, and the movie and art critic for D’s arts and entertainment blog FrontRow. You can find him on Twitter @psimek.