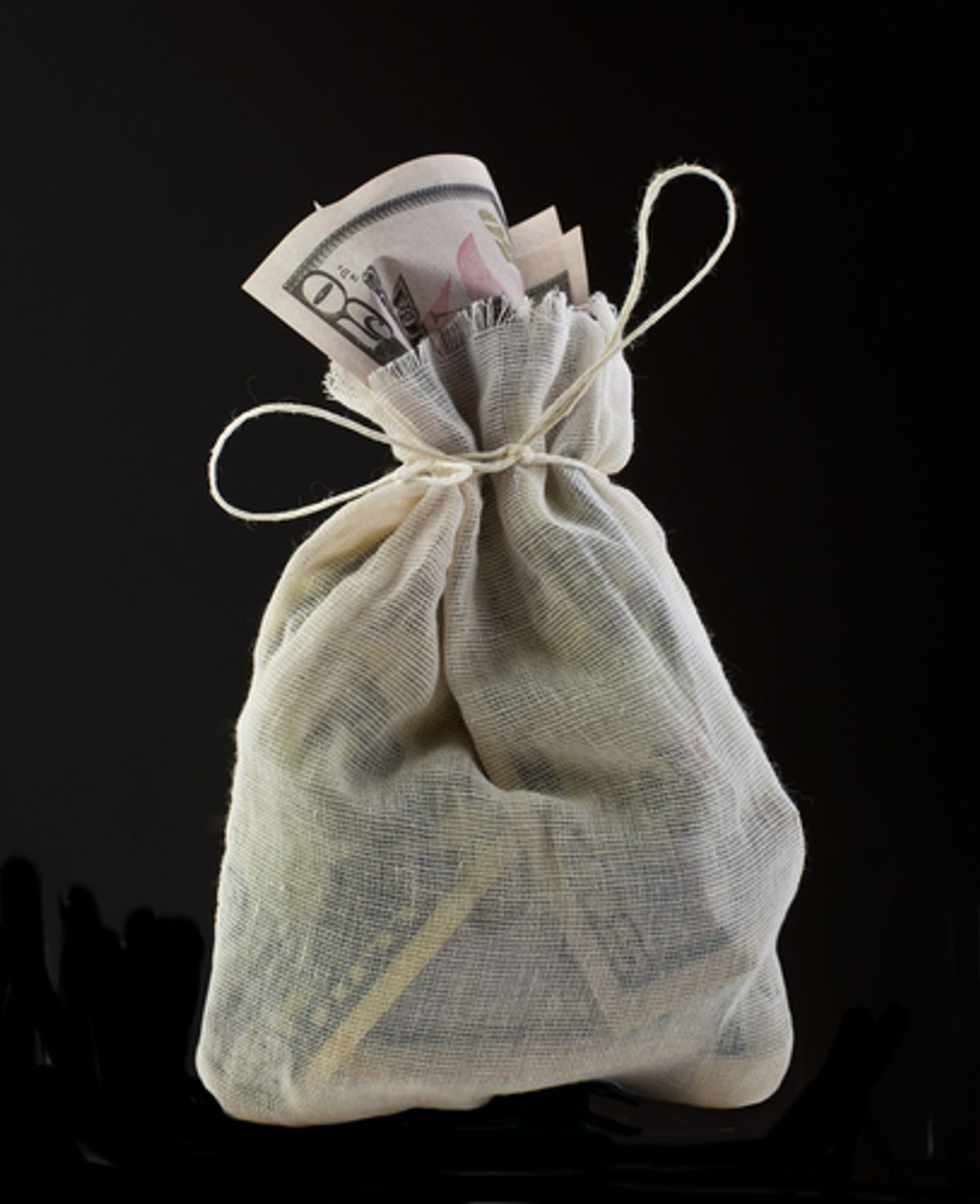 A new report on the Troubled Asset Relief Program revealed this week that American taxpayers are still on the hook for billions of dollars sunk into bailed out banks. Meanwhile, more than four years since the financial crisis, not one senior Wall Street executive has faced criminal prosecution for fraud despite widespread allegations that bankers ignored pervasive fraud when buying pools of mortgages. It's little wonder some of us have been dreaming of robbing banks.

Capturing this sentiment, a group of California artists launched a bank heist competition, inviting entrants to dream up and plan out bank robberies. The idea, according to the cultural collective behind the competition, Center for Tactical Magic, is to "re-visit the romantic representation of bank robbers in relation to the current economic and social crises, including: income disparity, unemployment, housing foreclosures, federal bailouts, the LIBOR scandal, and a wealth of other egregious economic indicators." It's a playful idea with a $1,000 cash prize for the best heist proposal, which of course does not ask for real bank heists to be carried out, but raises interesting questions about legality and justice in this time of Wall Street malfeasance and impunity.

"The Bank Heist Contest activates this latent desire, but it’s more than that.  It’s a critique of the banking establishments’ own criminal practices, an examination of the bank robber as portrayed in popular culture, a cathartic release of folks’ anger and frustration towards economic disparity, and a crowd-sourcing effort to incite imaginative action," Aaron Gach, co-founder of the Center for Tactical Magic, told Salon.

Gach and his fellow tactical magicians consulted former bank robbers, former Special Agents of the FBI, security consultants for major banks, bank tellers and lawyers among others to better understand what constitutes a solid heist proposal. He noted via email that entrants sent in so far have been impressive in their sophistication:

People from as far away as Australia have responded and folks are approaching the contest from all sorts of angles.  The responses so far have been pretty fantastic.  Some people have done incredible research demonstrating a real commitment to pragmatism.  Others have taken more absurd approaches. According to FBI statistics, most actual bank robberies are relatively simple note jobs.  However, some pretty sophisticated approaches are being put forward for the contest. Ironically enough, there are a few proposals that are similar but not quite as absurd as actual heists that have taken place.  For example, in 2006 Ren Xaiofeng and Ma Xiangjing used their positions as vault managers to carry out what is now recognized as the largest bank robbery in Chinese history.  With the aid of two security guards, they proceeded to steal over 50 million yuan (~$6.7 million) in 3 heists, spending nearly all of it on lottery tickets. And two years ago in the US, Richard James Verone robbed a bank for $1 to get access to health care while in jail.  There are numerous other bizarre, real-life heist accounts that might give some of the proposals a run for their money.  But one thing’s clear: the jury will have a tough deliberation ahead of them.

According to Gach, the process of thinking through a possible bank robbery could produce interesting and important cultural affects. "It’s easy to feel overwhelmed and powerless against such corporate behemoths that have been judged 'too big to fail.'  Or, in the case of HSBC or Standard Chartered who knowingly violated US laws, too big to even prosecute," he noted, adding that the contest "sets the stage for thinking through how these otherwise impenetrable institutions might be regarded as vulnerable."