"Justified's" Joelle Carter: "If I have to kill to feed my baby, I’m going to do it"

On last night's episode, Ava Crowder did a bad, bad thing — or did she? 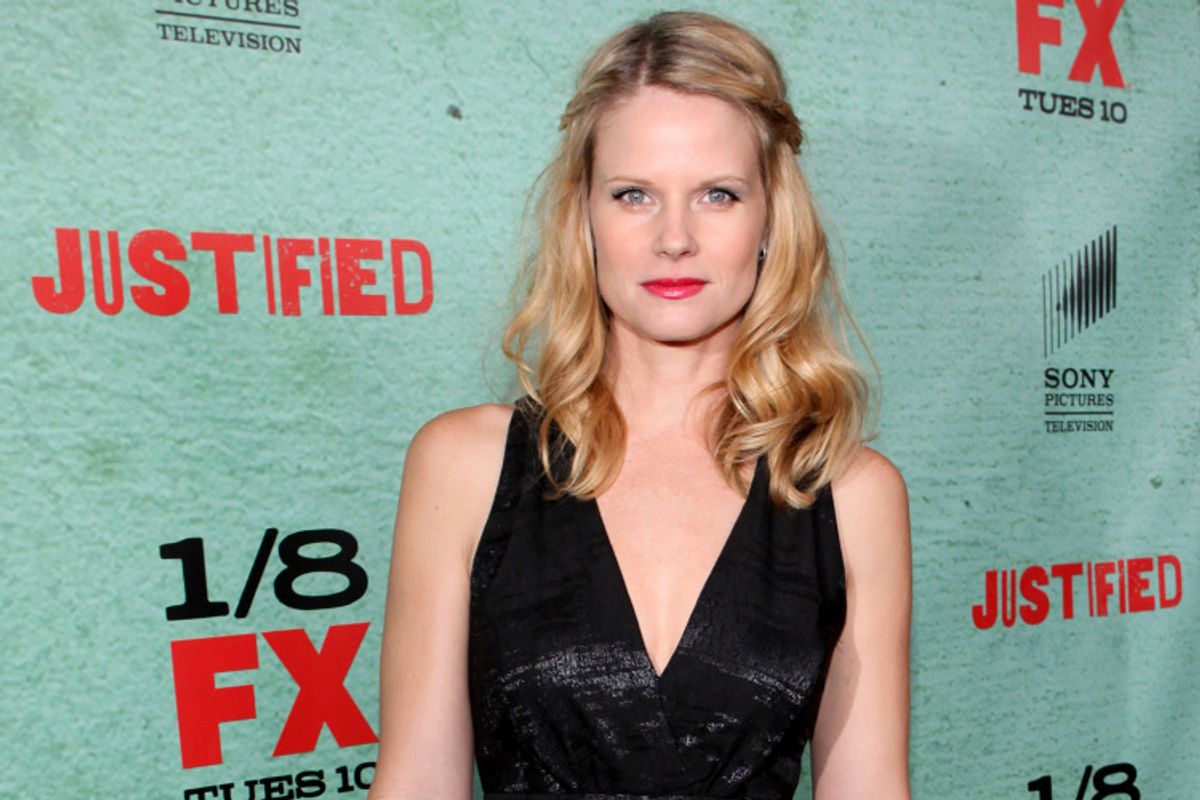 "Justified's" anti-heroine Ava Crowder, played by Joelle Carter, has been breaking bad since the series' second season. An abused wife who shot her husband in self-defense, she's since fallen in love with her brother-in-law, the charismatic criminal Boyd (Walton Goggins). When Boyd moved into her house, she swore she would kick him out if he broke the law. Now she's helping him run his business. She made him promise not to run whores when they first got together — now she's a madam, who last season punched one particular prostitute, Ellen May, in the face. Last night, Ava decided that Ellen May knew too much and couldn't be trusted to keep her mouth shut. She and Boyd ordered that Ellen May be killed. Ellen May escaped, but Ava took one more step down a dark road. I spoke with Joelle Carter about the character, her motivations, and whether she's still on the side of good.

What do you make of Ava’s arc at this point, and her decision to have Ellen May killed?

Ava’s not bad. On this show everyone has to – for lack of a better word – justify their characters’ actions, and I can totally do that. Ava’s had such an evolution to this point. In the beginning, she was looking for someone to save her, and she didn’t really realize that she saved herself. I think she’s come to the conclusion that she’s in charge of the present and the future and she’s making these decisions based on the fact that there’s no other way to live, there’s no other way for her and Boyd to survive together— and I believe they’re not going to be able to be apart. What was so romantic, I thought, and so sweet, is that Boyd didn’t want her to have to make the decision that she had to end up making.

But do you feel like she had to make it?

At one point, I wanted a rewrite, I was like, “I feel like Ava’s being groomed to be in the next Margo Martindale,” and they were like, “Totally not.” [Laughs.] That’s not the way that it’s going. I think what they like is her sense of humanity, the fact that she really does understand the lower and the higher parts of life. And she is put in a situation by Ellen May where she couldn’t trust leaving that end open. Ellen May’s so crazy. I don’t think in her heart that she thought she would say anything, but the fact that she’d come in the bar and just start blurting it out, Ava’s like, “You didn’t think you’d say it, but you just said it,” you know?

So you feel like Ava is still solidly a good person.

Yeah, I think for her moral clock she is not making bad decisions. She’s grown up in that environment in a place that she’s never been able to escape. It’s all she knows, pretty much. Shoot or be killed. So she’s never gone to the dark side as far as Boyd will before, but I feel like she can justify the fact that the most important thing to her is him and their relationship and so the actions she took is to preserve that. It’s kind of like a mama taking care of their baby. If we were all starving and I have to kill to feed my baby, I’m going to do it.

Although she’s really protecting herself, because the thing that Ellen May knows is not about Boyd, it’s about Ava.

Yeah, but in the end the consequence would be that she gets taken away.

Do you feel like Ava’s ethical compromises are pretty much only because she’s in love with Boyd?

Well, you don’t choose who you fall in love with a lot of the time. I just remember that one scene where Boyd comes to Ava’s house after the mine explosion and he gives me the money and that was the moment for me that I felt like Ava said, “I can follow my heart right now, and I’m not sure where it’s going to lead me, or I have to say ‘Get out of my house.’” But instead she took the money and said, “I’m going to tell the cops you were with me,” and she took that step into that world. Now, I’m not quite sure she knew exactly what she was getting into, or what the future would hold, but I think as the journey progresses she just keeps stepping up to be this person.

What do you think of Ava’s evolution about prostitutes specifically, from telling Boyd he couldn’t run whores, to being a madam, to punching Ellen May last season, to now ordering a hit on her?

My idea was she was going to run the best whorehouse ever. Women were going be taken care of, they would be clean, they would be protected, people weren’t going to beat them. When I punched Ellen May, I was like, “Oh, you guys. That’s a big one for Ava,” because she was a beaten woman. So I justified it by saying that in the moment before that, it’s supposed to be the last time Ava’s ever going to see Boyd again. So I have to step up and take charge of what he’s left, which is very important to him and thus me. I have to take care of the business. And I think it was personal too. This woman who I saved, who I really did care about, betrayed me in such a way that no one has betrayed me. But Ava didn’t go into that trailer planning to hit Ellen May, it just happened. There was a take where we did it and she fell back and it sounded like she busted her head against the wall, and I just went “Ugh” and covered my mouth for a second and then we continued the scene. Me and the writer loved it. We were like, “That’s so perfect because cause it’s like Ava’s completely shocked that she actually hit this woman. I really wanted them to use that take, but they didn’t.

So deep down, you feel like Ava is good.

Totally. I think Ava makes every decision she makes from the heart. It’s this life that they live that they have to believe in. It’s a different world. There are people who write on Facebook and Twitter and stuff, “Get away from this guy before it’s too late!” But I just see these as people with these violent pasts and they’re so bruised and damaged and yet they found a way to find love and some kind peace. I don’t see them as bad.

Do you think that there’s anything she wouldn’t do for Boyd at this point?

I think she’d do anything. I mean, after episode four, she looks at herself a little bit harder, and I think she’s not trying to dismiss her actions, I think she’s trying to figure out how, if I’m going to be this person in this world, how do I deal with this? Kind of like Walter White. I love “Breaking Bad,” it one of my favorite shows, and he keeps taking another step into this world and he can always say, “Oh, I’m trying to provide for my family. I’m trying to make this right in my own head,” but there’s a tiny part that’s like, “OK, well, this is really not right.”

Well Walter White is way past the point …

Yeah. He jumped the shark. [Laughs.]

Yeah, he’s way bad. Are people surprised that you don’t have a Southern accent in real life?

I presented an award to ["Justified" showrunner] Graham [Yost] about a month ago, and I didn’t have an accent, and ehere were like four people that were stumped. They were like, “Oh, I thought you were from Georgia?” And I was like, “I am, but I lost the accent. It’s easy to get back.”

It seems like you have more to do this season, than you have at other points.

Oh, yeah. I’m just starting to answer a lot of questions for Ava now. It was a struggle in the beginning, because there’s so much happening off the screen, and from season one to two, all of a sudden I’m living with Boyd. It’s like, “All right, guys, how did this happen? All I’ve done is discuss my hate for this man.” So yeah, I had this big explanation of my own story and I would just send it in to the writers and I’d be like, “This is what I’m doing in case you guys wanna catch up.”

Did they write you back, or are they just like that’s all cool?

Were you agitating for there to be more of Ava?

Oh, yes. Totally. I’d pick up a script and be like, “Look at this. I’m on half a page!” My husband was like “Just go in and make it the best half page possible.” I’m like “Ughhh.” It was a little frustrating sometimes because I just love to play her so much. But it’s helped pay off what’s happened to Ava, because I feel like her journey is a little bit more elongated than some of the other ones.