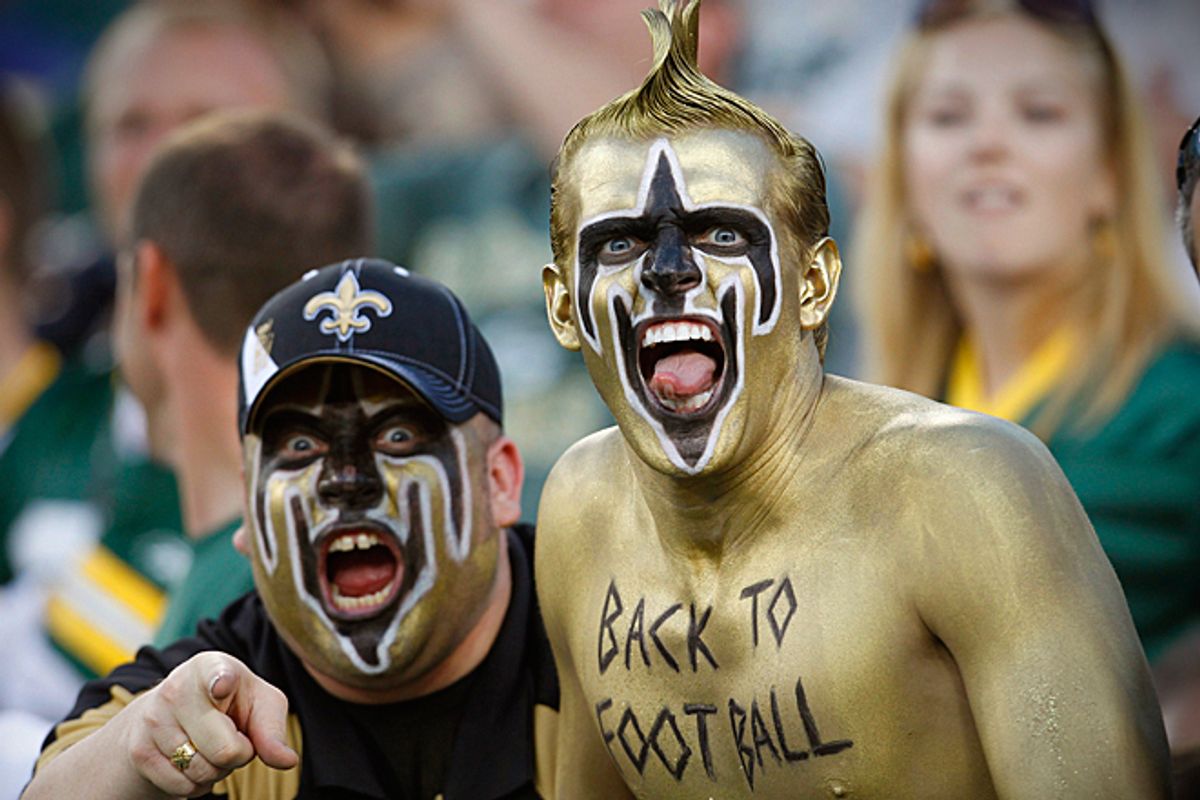 This weekend’s Super Bowl promises to offer excess, violence and, if history is a guide, not much of a game. But what it won’t show is hundreds or thousands of fans screaming racial insults at the players. What is it that makes US sports events relatively (if by no means perfectly) classy, compared to much of the world’s big-time sports?

All very well-documented. But even just in the past month, Italy’s Lazio soccer club came under investigation by the sport’s governing body after fans allegedly shouted anti-Semitic chants, and appear to have stabbed a guy, after provoking a bar fight with supporters of the visiting British team, Tottenham, historically associated with London’s Jewish community. That was before the match. During the game, the Roman team’s supporters were yelling Juden Tottenham (German: “Tottenham Jews”) and held up signs reading “Free Palestine.” Lazio fans do not usually express opinions about Middle Eastern politics during matches.

Also this month, Kevin Prince Boeteng, a star a few hours north in Milan, had become the first player to cancel a game all by himself in response to racial abuse. After 25 minutes of hearing ethnic slurs from the crowd every time he tried to score a goal, Boeteng simply stopped playing, picked up the ball, kicked it into the crowd and walked off the field. In a show of support, the rest of Milan’s multi-multi-multi-million-dollar roster followed their teammate to the showers, ending the match.

That brings us to this week. With the month almost out, another display, this time in Holland. For the uninitiated, that’s Jozy Altidore, a soccer player on the US National men’s team, speaking in the video [below]. When not representing the country in international competitions, Altidore plies his trade with Alkmaar, a team in Holland, where yesterday he found himself subjected to a similarly venomous environment to Boeteng. As have any number of others over the years. (MSNBC compiled a list of incidents as of a few years ago; it’s ugly, and it’s here.)

Altidore is getting lots of good press today for his response. After encouraging the sympathetic referee to continue the match, he carried off a postgame interview that takes gentlemanly restraint to levels heretofore unseen outside Victorian drawing rooms. He’s so in control of the situation, it seems to make his interviewer nervous. The only wink to feeling vindicated is when he happens to mention that after the taunts, he scored a goal.

Has anyone studied why big-time sports, particularly, is such a venomous arena in some parts of the world, where other places express their petty hatreds in other ways and other locales?

In fact, the European Union itself did, as recently as two years ago. (download the pdf here). Among the theories advanced by the continent’s Agency for Fundamental Rights (aside: where can we get one of those?) was that diversity in sport only seems to occur in soccer. Your local softball league or youth rugby is going to be more segregated, so the fan has never seen, much less cheered for an ethnically mixed team before outside the rarified, exotic world of Big Sports:

The available evidence produced by the research for five Member States showed that the overall participation of ethnic minorities and migrants in amateur sport is low, especially among women and girls. In contrast to football, where the line-ups of many national teams today mirror the diversity of European societies, the research found that ethnic minorities or migrants are particularly underrepresented in other popular national sports, which can affect the popular image of otherwise diverse societies. The research also found that in some Member States the participation of ethnic minorities—especially second-generation youth—at the youth and amateur level of some sports is not reflected in their participation rates at professional level.