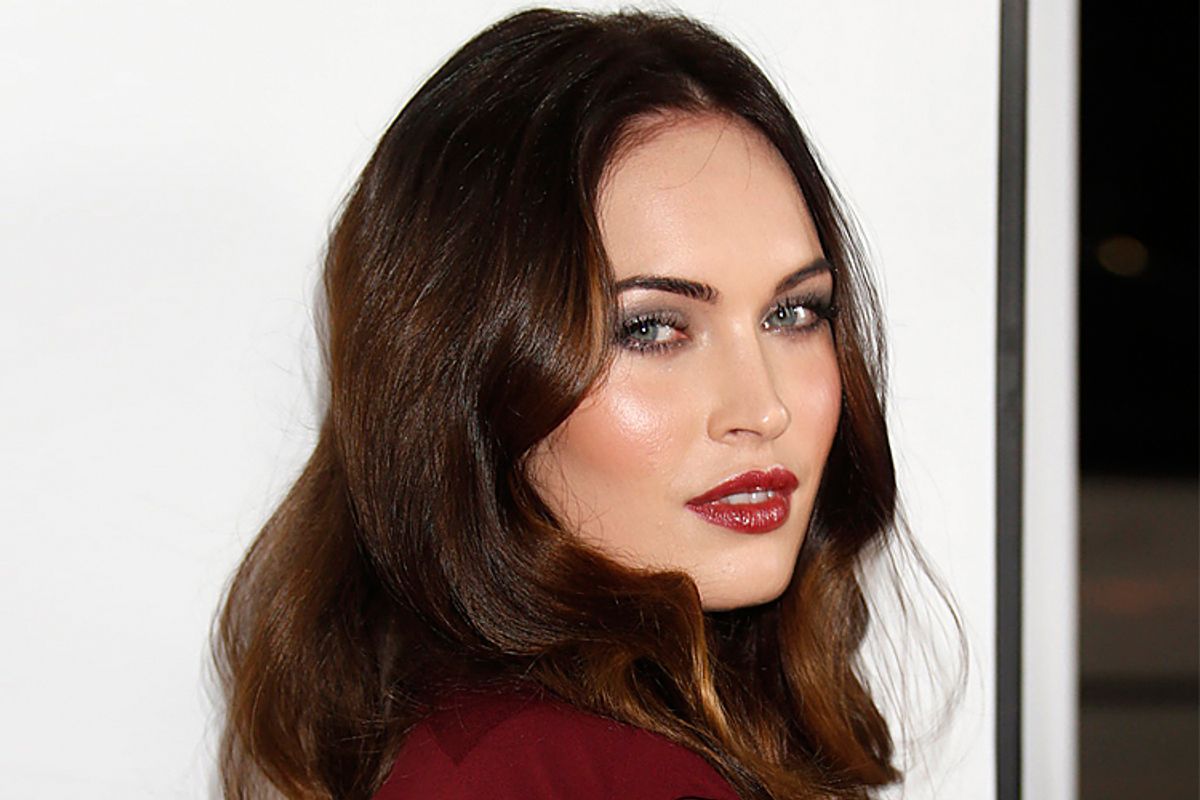 For a woman who says she's not interested in her career right now, Megan Fox sure is doing everything a woman in Hollywood could do to raise her profile. The 26-year-old actress, in just the four months since the birth of her son, Noah, has managed to leverage motherhood into the pinnacle of celebrity success. And nowhere is that more evident than in her cover story in the new U.K. edition of Marie Claire. In her interview, she trots out all the most beloved of maternal party lines – including the classic I-have-the-very-best-job-in-the-world line. The sultry Ms. Fox, who was also recently the subject of the most slobbering fanboy cover story in the history of Esquire ("The symmetry of her face, up close, is genuinely shocking … It's closer to the sublime, a force of nature, the patterns of waves crisscrossing a lake, snow avalanching down the side of a mountain, an elaborately camouflaged butterfly") declares that acting "isn’t my job anymore" because "my job is to be with" her baby. Noah.

In just one brief, glossy magazine profile, Fox has given the mainstream media all the fodder it needs to exploit every desirable angle on how to be the perfect mother, circa America, 2013. First and foremost, of course, she's got to be "flaunting her post-baby body" because, as everyone knows, after you have a child, you are obliged to melt back into totally bangable, bikini-worthy shape as soon as possible.

But while you're flaunting that new body, make sure you're clear on having no thought about anything in the world but your baby — obviously. As Fox says to Marie Claire, "The ultimate satisfaction for me is being with my son." And even if you're still silently burning through tubes of Preparation H and your nipples are cracked, it's important to let the world know that you're totally into having more babies. "I want to have more kids," says Fox. "That is where my heart is."

That's good, because if you are a woman, no one is ever going to stop asking when you're going to have a baby, and when you're a mother, no one is ever going to stop asking you about when you're going to have more. You should probably just repeat what Megan Fox says every not-pregnant moment of your life between now and age 50. Also, if there's some way you can credit your baby with something miraculous like, I don't know, curing your anxiety disorder, that'd be swell, too. "When they come out they are covered in all kinds of stuff," says Fox, who announced in 2010 that she's OCD.  "I took [Noah] right on my chest and, from that moment, nothing he does freaks me out. I don't want to give him a complex."

Look, motherhood is amazing, and if it's your dream to take a break from your career to spend time with your baby and you can do it, rock on. But why does being a mother have to be a "job" at all? It's not as if raising a child is like leaving one company to go work for another, and it sure as hell isn't like starring in the "Transformers" franchise. It's its own thing. So when Fox says, "I've never been validated by work or fame or Hollywood or any of that" – I have to ask, has anyone suggested that being No. 8 on the Maxim Hot 100 is supposed to be an equivalent to parenthood?

More than that, though, why does motherhood have to incessantly be spun this way in the media? Why is the narrative always peddled in the same repetitive manner, again and again -- in the convenient, conformist tale of the still superhot, post-baby mom who reassures everybody that her professional career ambitions have now been reassessed and appropriately downgraded? Because if a woman doesn't toe that line, well, just look at all the hell Marissa Mayer caught. Fox's awe and delight at her new baby are no doubt utterly sincere. But it's a drag to see her story crammed into an all too familiar  and damningly unrealistic and limited ideal of the complicated, challenging -- and definitely not a job -- experience of motherhood.