Did the football star's seducer get the idea from a 2006 indie film? Maybe not, but the parallels are striking 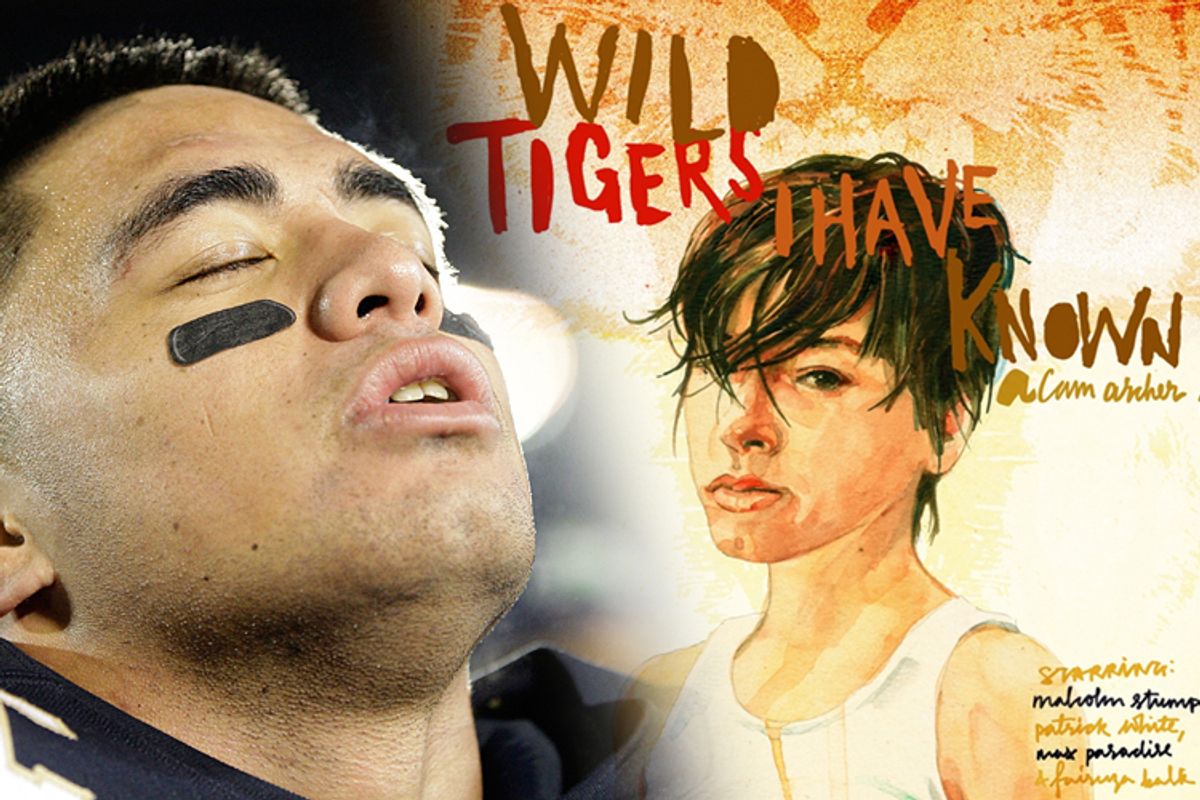 No doubt the strange affair of Notre Dame star linebacker Manti Te’o and his imaginary dead girlfriend will provide fodder for a movie somewhere down the line, whether cheesy and lesson-oriented, sleazy and exploitative or arty and sensitive (or perhaps all three at once). But with the recent confirmation that Te’o’s acquaintance Ronaiah Tuiasosopo created and maintained the female persona of Lennay Kekua because he was "deeply, romantically in love" with the studly football hero, it came to me that this story already is a movie.

Various commentators have already pointed out the similarities between the Te’o affair and other information-age scams, from the film-turned-TV show-turned-verb “Catfish” to the story of JT LeRoy, a purported transgender teen genius from Appalachia who turned out to be an adult female New York writer named Laura Albert. And it’s not as if Tuiasosopo was the first man in history to pose as a woman in order to seduce another man – or, on a more theoretical level, to blur the boundaries of sexual orientation. Just looking at recent culture, you have “M. Butterfly” and “The Crying Game,” not to mention the profusion of transgender or “shemale” pornography, which deliberately confuses heterosexual and homosexual desire and is primarily consumed by nominally straight men.

But I’m not sure anyone has yet noticed that the story of Manti Te’o and Ronaiah Tuiasosopo is almost exactly the same as the plot of the 2006 low-budget indie film “Wild Tigers I Have Known” by writer-director Cam Archer, who made the film when he was 24 years old. Deliberately opaque and experimental in the manner of early Gus Van Sant (who lent his name as an executive producer), “Wild Tigers” tells the story of a lonely, androgynous California teen named Logan (Malcolm Stumpf), who has not yet defined himself as gay or transgender or anything else, but becomes obsessed with a handsome, athletic older boy named Rodeo (Patrick White). As I remember the film, Rodeo is a football player, but I can’t find any published reviews to corroborate that, and it may have been a different sport. He’s a stud and a BMOC, let’s leave it at that.

While there’s no suggestion that Rodeo is gay, he’s depicted as a sensitive and introspective young man who despises the bullying Logan is often subjected to and doesn’t much enjoy hanging out with his jock peers or their girlfriends. He befriends Logan and they go on hikes together in the nearby woods where mountain lions (not wild tigers) have been seen. But Logan seeks a different kind of intimacy, and believes he understands Rodeo in a way that so-called real girls don’t. He begins calling the older boy at night, adopting the bold, flirtatious persona of a girl named Leah, who describes herself in luscious terms and lures Rodeo into a phone-sex relationship. Tuiasosopo’s Lennay Kekua persona actually lasted much longer and ended with a more melodramatic flourish. In the movie, Logan doesn’t kill Leah off; instead he arranges an in-person meeting and comes clean – at least, in murky art-film terms -- after only a few virtual encounters.

The psychological dynamic shown in the film, the drama of a younger boy who is confused about his own sexual responses and feels himself passionately drawn to an older, more masculine figure and intrigued by playing a "feminine" role -- at the risk of playing amateur Dr. Phil, that sounds very similar to what was apparently going on with Ronaiah Tuiasosopo. Am I suggesting that Tuiasosopo, a real-life California kid who says he is trying to "recover from homosexuality," got the idea for his fake-girlfriend romance with a football star from a gay-themed experimental film that hardly anyone saw? I suppose we can't rule that out, but it isn’t likely. According to IMDB, “Wild Tigers” earned less than $10,000 in its brief theatrical release, and it doesn’t appear to be available on-demand or on the Internet; the DVD is out of print and costs $25 or more. The possibility that Tuiasosopo ever heard about the movie, still less saw it, is not high. It’s much more plausible that this is a case of life imitating art, which was no doubt imitating life in the first place. Almost all young people have their hearts broken by wanting someone they can’t have, and almost all of us go through periods of pretending to be someone we’re not. For Tuiasosopo and the hero of “Wild Tigers I Have Known,” and for other kids who feel unsure about their sexual orientation or gender identity, those fictions can sometimes get a little crazy.