Is "Enlightened" quietly the best show on TV? 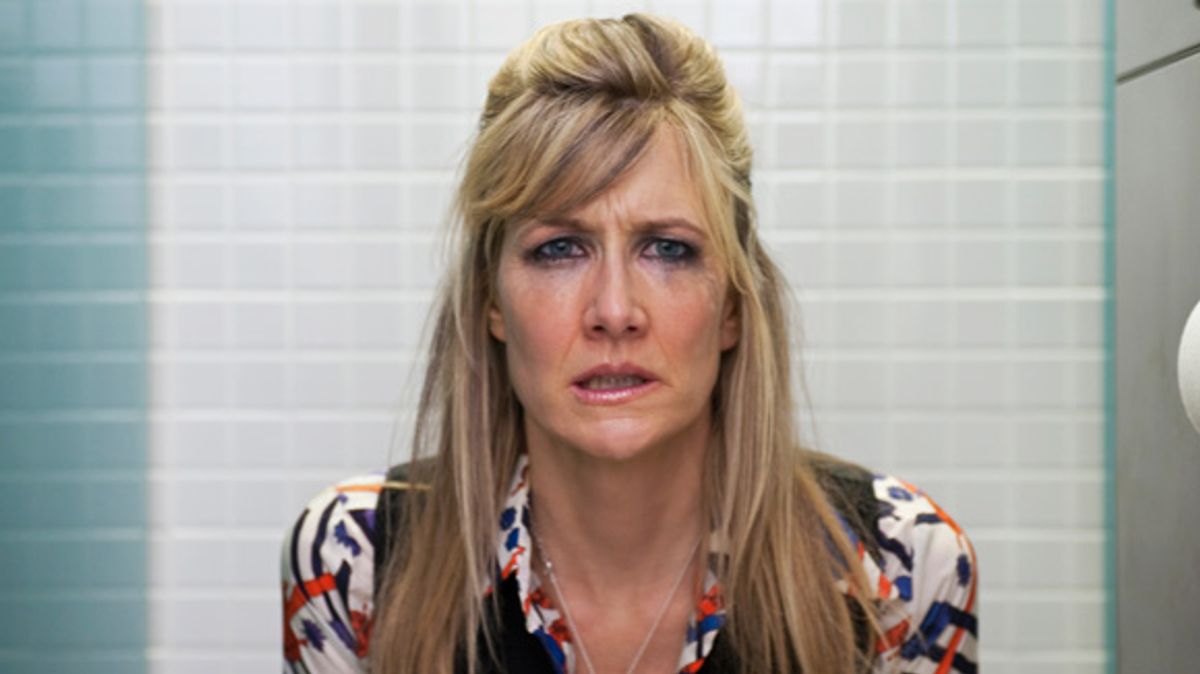 The second season of "Enlightened" started recently, and if you haven’t yet discovered this show, it’s a real pleasure to fast-watch the first-season episodes and get up to speed. As a “comedy of alienation,” according to show writer Mike White, "Enlightened"is remarkably good, an insightful satire of the symbiotic relationship between the New Age self-actualization movement and the worker hell of corporate America.

The basic premise of "Enlightened" is an inspired one. A 40-something woman named Amy Jellicoe (Laura Dern) has a sobbing, shrieking breakdown at her workplace, Abaddon Industries. The first shot of the pilot episode is of Amy’s tear- and mascara-streaked face, clownishly distorted by anguish. Betrayed by the married executive she’s been sleeping with and facing a demotion from the Health and Beauty Department to Cleaning Supplies, Amy stages a hysterical confrontation in the sleek corporate hallways. She chases her betrayer to the elevators and pries the elevator doors open with superhuman strength, wailing, “Health and Beauty was mine, Damon! Health and Beauty was mine.…”

Amy recovers at an idyllic and expensive treatment center in Hawaii called Open Air. There she has a spiritual experience while deep-sea diving and swimming with a sea turtle, which is admittedly so beautiful it ought to count as the religious epiphany Amy takes it for. “I felt its presence all around me,” Amy exults to her skeptical ex-husband Levi (Luke Wilson). “It was God, or it was better than God. It was saying, ‘This is all for you.’” That’s Amy all over, exemplifying the worst of New Age tendencies with her belief that the whole wide world is just doing an elaborately choreographed dance before her in order to help her get her shit together.

Yet the show manages to preserve an admirably nuanced view of Amy; for all her foolishness, she’s trying to learn something, do something, be something better. Though "Enlightened" takes a harsh view of the hellscape we’ve made of America, it also acknowledges that we haven’t managed to ruin absolutely everything—there are still real, live sea turtles swimming in our oceans, after all—and the show periodically indicates the slivers of loveliness and grace that remain and beckon to us and torture us with the better lives we ought to be leading, if we knew how. Amy Jellicoe is the queen of not knowing how to lead this better life she’s glimpsed. Of course, she’s a swift convert to the trite New Age philosophy pitched at Open Air. (Later on, Amy gets a bill for $25,000 from Open Air, demonstrating, as Amy’s implacable mother says, that you CAN put a price on enlightenment.)

On the other hand, what else could Amy do but shift gears and merge into a standard Phase 2 of contemporary American experience? After you’re burnt out down to the socket trying to be a tireless, ruthless, profit-generating American achiever—that’s Phase 1— you attempt to recover by doing yoga, meditation, good works and vague spirituality. Amy already gave the other obvious alternative a shot—drinking, drugging, and having degrading sex while her marriage was falling apart (call that Phase 1.5 because it so often overlaps with Phase 1).

So what else should she do at this crisis point of her life? What does anybody do but grab the life preserver that‘s in front of them? And if you’re a woman living in California anywhere near the coast—Amy’s trapped in Riverside, CA, a sun-parched, flatland Inland Empire city an hour east of Los Angeles—the life preserver is deep breathing in lotus position, and dreams of a meaningful job, helping people and saving the environment. All excellent things, but when you’re in debt and have to work for a living, it’s amazing how sharply curtailed your soulful ambitions can be.

The rest of the episodes are about Amy’s mostly clumsy and futile attempts to “be the change” back at work, and back home living with her mother Helen. Helen is played by Diane Ladd, Dern’s actual mother, doing uncomfortably accurate work as an older woman who lives in a state of impassive endurance, devoted to her garden, her dog Ginger, and endless reruns of "The Rockford Files."

Amy’s efforts generally culminate in dashed hopes and a frenzy of curses (“Fuck! Fuck! Fuck!” while stalking to the car in a rage and backing out with a screech of tires). Or in horrors of embarrassment (shunning at work, awkward silences and frozen expressions following all of Amy’s New Age platitudes and naïve attempts at inspiring collective action for the common good). Or in the inadvertent wounding of all the wrong people. Each show begins and ends with Amy’s voice-over “meditations,” solemn and thoughtful, her projection of her best self, everything she isn’t and can’t be when she’s out in the daily scrum of human infighting: “I will not run away from my life all my life. I will try to really live. I will be mindful, I will be wise. I will change, I will be an agent of change.”

Amy isn’t the sharpest knife in the drawer, and the show may repulse viewers who can’t endure this clear-sighted portrait of female loserdom. All of Amy’s attempts to enlarge the scope of her life, some of them annoyingly self-dramatizing but others quite straightforward and touching, are crushed. Her mother stands stiffly inside Amy’s overlong homecoming embrace, warning her, “You’re going to spill my coffee.” Abaddon management is equally guarded, ready to fend off all of Amy’s new eco-conscious ideas for the Cleaning Supplies department with a simple plan to ease her out of the company altogether.

Amy’s boardroom meeting with two mid-level Human Resources women tasked with getting rid of her is a wonderfully handled scene. The production designers have the insidious “kinder, gentler” corporate image nailed down precisely. No glass and steel cage interiors anymore; now it’s all soft colors and pale woods and giant photocollages of green leaves on the walls. Corporations have long since found ways to disguise themselves in New Age camouflage and train the Human Resources women to sigh in empathetic faux-regret while telling Amy that unfortunately there’s just no position open to her at this time. But Amy hasn’t forgotten all of her Phase 1 training. She knows how to sigh in return and earnestly say that she’s confused, because she, like, talked to a lawyer? And the lawyer said Abaddon would have to keep her on or face some kind of big lawsuit, so…?

So Amy, briefly triumphant, returns to Abaddon the next day “being the change” in a sun-yellow dress that matches her hair and stands out beautifully against the drab suits and dismal skirt-and-blouse, polo-shirt-and-khaki-pants office wear. In her typically self-deluding fantasy she imagines herself cheered on by grateful co-workers as she leads the green revolution at Abaddon. Then, in grim reality, she’s led down a series of prison-like back hallways to her new position in a dismal sub-basement where her sun-yellow dress looks ludicrous among the gray-faced drones doing data entry at a row of crappy computers. This job among the “circus freaks” working on top-secret project “Cogentiva” in the sub-basement is only the first of many hard hits Amy will absorb while continuing on and on in her quixotic quest to “make a difference” somewhere in her godforsaken world.

Amy’s only awesome quality is sheer persistence—she keeps coming back like a canting New Age Terminator. She won’t stop, long past the point that cold stares, scornful smiles and impatient sighs would stop the rest of us. That serves as the show’s fascination as we round into Season 2—you can’t help but feel that such mad perseverance will have some extraordinary result, probably disastrous, but just possibly not.

More determined than ever “not to feel small anymore,” Amy decides to become a whistleblower and expose Abaddon’s appalling record of corporate malfeasance by enlisting the aid of her computer-geek co-worker Tyler (Mike White), who has a desperate crush on her. Amy, in turn, is smitten by the big-time investigative reporter Jeff Flender (Dermot Mulroney), who utters casually macho lines into his cellphone like, “Can’t do it in November, I’m in Dubai,” and takes a condescending interest in what Amy might be able to turn up in hacked Abaddon executive e-mail accounts.

None of this bodes well for anybody, but there’s a certain exhilaration in considering what might happen to someone like Amy. Picture the most blandly terrible place you ever worked, and an Amy in it, an Amy who hangs on like a limpet, a true believer who keeps saying the most “inappropriate” and unacceptable and discomfiting, and sometimes, appallingly true things over and over and louder and louder, and wondering why you don’t want to go to lunch with her so you can talk more about that really informative book she lent you calledFlow Through Your Rage, or that photocopied packet she put together on environmental renewability, or that pamphlet she put in your inbox for the Open Air Treatment Center which would really help you work through a lot of serious shit!

And apparently, she can’t ever be slapped down so hard that she doesn’t get up and start doing it again. Every episode, something is bound to pop. You can see why co-creators Mike White and Laura Dern decided to gamble on this painful but revelatory premise. Unleash Amy and watch the endless repercussions in unsparing detail and laugh sardonically at your own stumbling way through the poisoned world. That’s post-millennial entertainment!