"It Gets Better" pulls 49ers' PSA after players deny their involvement

With friends like the San Francisco 49ers, Dan Savage's project for bullied teens needs no enemies 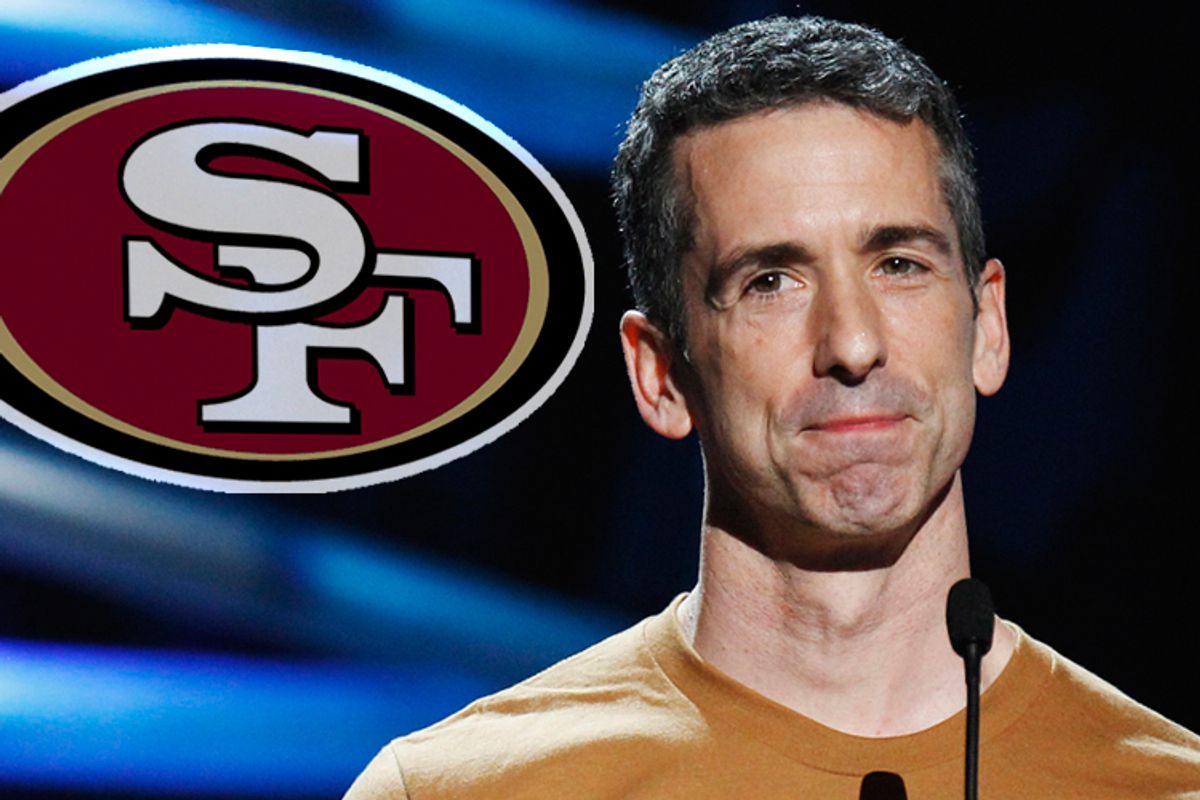 Dan Savage has pulled the San Francisco 49ers' "It Gets Better" video from the site that serves as a resource for bullied teens after two of the players involved disavowed the video, in yet another instance of Sunday's Super Bowl serving as a flash point in the ongoing debate over gay rights.

After the Baltimore Ravens' Brendon Ayanbadejo came out as an advocate for gay rights, and the 49ers' Chris Culliver said he would never play with a gay teammate, it became clear that the Ravens vs. 49ers matchup on Super Bowl Sunday had brought to football some of the debate that had swirled for years around the corporate world and the military. The 49ers' video, intended, like all "It Gets Better" videos, to inspire bullied gay teens, was treated as though it had never happened by linebacker Ahmad Brooks and nose tackle Isaac Sopoaga, indicating that even some purported allies are not interested in the debate at all.

Asked by a USA Today reporter about the video, Brooks said, "This is America and if someone wants to be gay, they can be gay. It's their right. But I didn't make any video." He later indicated, "It was an anti-bullying video, not a gay video." Sopoaga flatly denied involvement in the video and refused to comment after being shown it.

"It Gets Better" videos are so hip -- those speaking to gay teens have included allies from Ke$ha to Hillary Clinton -- that they've become de rigueur even for those who may not be supporters of the rights of gay men and lesbians, or just may not be interested. (In the USA Today story, an "It Gets Better" representative notes that the team "picked the most intimidating guys to deliver the message" -- it had been all about image for the 49ers.)

The situation, which "It Gets Better" founder Savage called "horseshit" on Twitter, "shows how courageous athlete allies are," said Brian Ellner, a marriage equality advocate and one of Ayanbadejo's advisers.

"Unfortunately, the reaction of the 49er players sends the message that gay and lesbian teens are not welcome in sports," said Athlete Ally founder Hudson Taylor via email, citing Ayanbadejo and others as those who would undertake "the work that needs to be done."

There's encouragement for young gay athletes in today's news, too: Terrell Suggs of the Baltimore Ravens indicated that a gay man would be welcome in the locker room. "We wouldn't have a problem with it," he said. "We don't care ... Who cares? Whatever a person's choice is, it's their choice." There are nits gay-rights advocates might choose to pick -- the idea of "choice," for instance. However, as gays gain wider acceptance, it's clear that not caring about your teammates' sexual orientation is, likely, a road of far less resistance than stonewalling a reporter who suggested you might be a gay ally.