Pick of the week: Is the golden age of short films upon us?

From three wrenching documentaries to a steampunk fantasy to Maggie Simpson, this year's Oscar shorts pack a punch 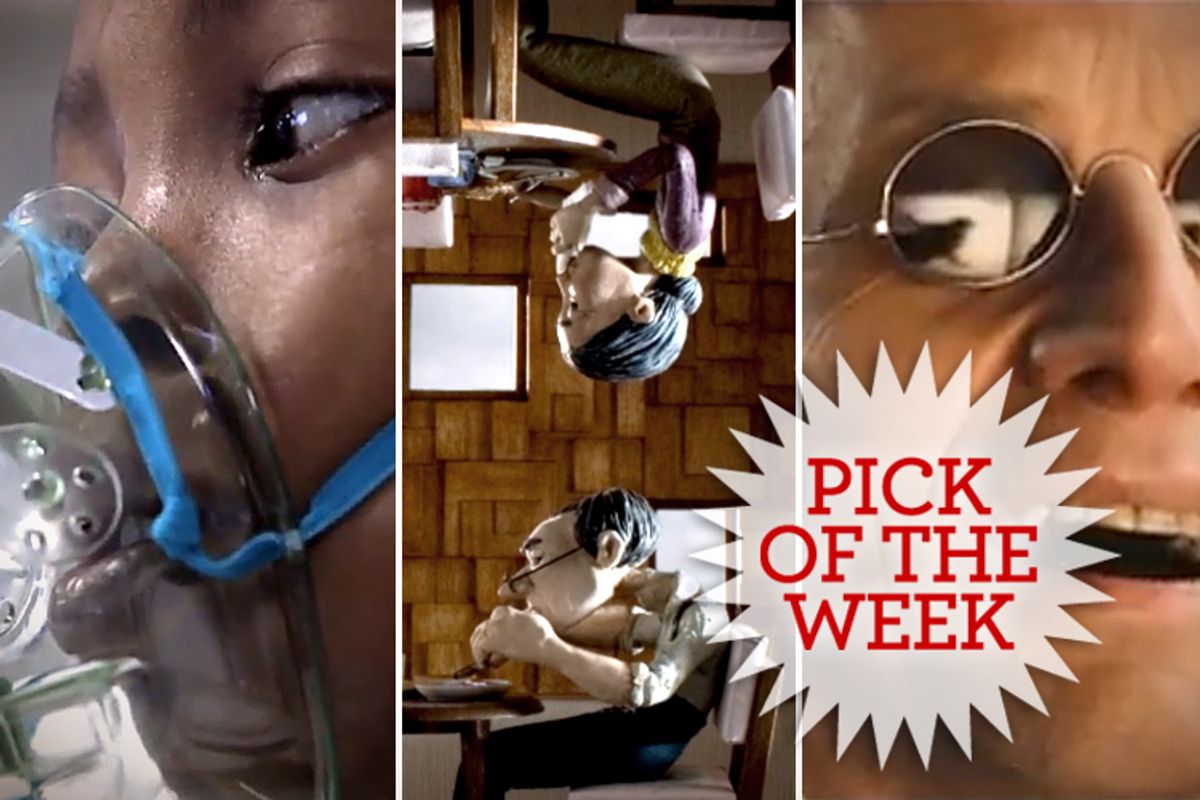 We’re living in a golden age of short films – or at least we should be. Whatever device you’re using to read this article constitutes a node in the greatest distribution network for electronic media ever imagined or devised, one that theoretically reaches most people on the planet. As anybody who’s ever filled an idle minute with a YouTube video of someone else’s cat knows, a widely shared clip can pile up hundreds of thousands of views literally overnight. But unlimited access to an overwhelming torrent of unedited and unfiltered images is one thing, and careful, artful curation is quite another.

There’s a reason why short-film programs at film festivals are usually packed, and the annual showcase for Oscar-nominated shorts has become ever more popular, even in a world where all of us could spend our remaining lifetimes, several times over, watching allegedly entertaining Internet videos at no cost. (At no financial cost, that is; I do not speak of the cost to your soul or your sanity.) As unreliable as the Academy Awards may be at every possible level, it’s a relief to encounter the 2013 Oscar-nominated shorts and reflect that a group of people who know quite a bit about the art and craft of filmmaking has decided that these are good examples.

This marks the eighth straight year that the Oscar-nominated shorts – five nominees each in the live-action and documentary categories, plus a total of eight animated films, only five of them actual nominees -- will get a theatrical run and then a home-video release, and the breadth and reach of the program has grown significantly. This year the films have been split into three separate programs for the first time (I think) and will screen in nearly every state in the Union (sorry, North Dakota!), four Canadian provinces and several European nations, before becoming available worldwide from iTunes and other on-demand providers during the week before Oscar night. What will you actually see, and what will these films tell you about the future of the medium? Hell, I don’t know – as with everything else about the Oscars, it’s best to take this material with a dose of salt. All three programs are worth seeing, but I recommend the documentaries first and foremost.

In recent years the Oscar-nominated animated films have tended ever more toward the whimsical, the lyrical and the nonverbal – not to mention toward extreme brevity. Only two of this year’s nominees break 10 minutes, although Minkyu Lee’s 16-minute “Adam and Dog,” a widescreen Creation fable made in old-fashioned cell animation, is so gorgeous you won’t want it to stop. None of this year’s animated films contain any noticeable dialogue, not even my other favorite, the five-minute “Maggie Simpson in ‘The Longest Daycare,’” in which the youngest member of the Simpson clan is consigned to the brutal world of an Ayn Rand-inspired daycare. While I agree that it would be patently unfair to give an Oscar to what’s basically a TV skit, “The Longest Daycare” has all the unforced charm and heart that the visually impressive black-and-white Pixar short “Paperman” shoots for and doesn’t quite achieve.

At least the animated films, which also include the doleful stop-motion marriage farce “Head Over Heels” and the two-minute visual gag “Fresh Guacamole,” seem content to be what they are. What always makes the live-action Oscar-nominated shorts seem both frustrating and appealing is that they so obviously want to grow up and become features. There’s a rich tradition of experimental, non-narrative or simply non-mainstream short films that is almost never represented in this category, which has long been viewed as a training ground for Hollywood aspirants.

I’m not even sure I’m complaining about that, or claiming it’s a bad thing: Belgian filmmaker Tom van Avermaet’s steampunk-flavored 20-minute metaphysical fantasy, “Death of a Shadow,” is a wonderfully realized little comic-book fable, intact unto itself. But this tale of a dead World War I soldier compelled to spend the afterlife collecting the shadows of dying people with a spectral camera might be even better filled out to 90 satisfying minutes, and I’d love to see it. It’s somewhat more likely, sad to say, that van Avermaet will now get a job directing a horror remake, an “X-Men” sequel, or some other high-concept action flick with a declining Hollywood star.

This category also includes two memorable featurettes in a neorealist vein whose appeal lies in the fact that they were made at all, given their locations, casts and subject matter. Bryan Buckley’s “Asad” was shot using amateur actors drawn from the Somali refugee population of East Africa – since no foreigner in his right mind would try to make a film inside Somalia – while Sam French’s “Buzkashi Boys” was shot on the streets of Kabul by a creative team combining Western and Afghan filmmakers. (Buzkashi is that bizarre-to-outsiders Afghan version of polo, involving a bunch of guys on horseback and a goat carcass.) If the latter is a superior visual accomplishment, capturing the rhythms and images of daily life in the Afghan capital, its story about the doomed friendship between two boys from different backgrounds feels a bit mannered and manipulative. “Asad” is a slightly awkward tale about a boy who yearns to be a fisherman in a land of pirates and gangsters, but it gets us to an unexpected conclusion that packs a strange and potent wallop.

Every film in the documentary category pushes at the Academy’s prescribed 40-minute limit for shorts, which makes for a pretty long evening of viewing – not to mention a wrenching one. But all five are rewarding and downright terrific examples of the form, and at least three are among the most powerful documentaries you’re likely to see all year. (All, unsurprisingly, fall into the straightforward, issue-driven, vérité-style mode; there are no artful, puzzling docudrama hybrids to be seen here.) I think my favorite of these, or at least the one that left me blubbering most uncontrollably, was Cynthia Wade’s “Mondays at Racine,” which tells the stories of a circle of women who visit a Long Island beauty parlor that offers free treatments once a month to cancer patients. It’s a modestly scaled film with a modest suburban setting, about the ramifications of a disease that has touched most American families, but Wade’s blend of intimacy, hopefulness and profound tragedy ultimately makes it much, much bigger than that sounds.

The issue in Kief Davidson’s “Open Heart,” on the other hand, is almost too difficult to face. His film travels with a group of severely ill Rwandan children to an impressive new hospital in Sudan, run by an Italian relief organization, that is the only place in the entire continent of Africa that will do pediatric cardiac surgery for no cost. It’s a wrenching and shocking film that’s not for the weak of heart or stomach, even though the children Davidson follows all survive, at least for now. Most of us are aware of our world’s gross and glaring inequalities, at least on an intellectual level, but “Open Heart” forces us to confront that a level of medical care that would be virtually routine for you and me is all but unavailable to a person unlucky enough to be born in the poorer three-quarters of the human population.

In case those two movies don’t provide enough heavy lifting, there’s also Sari Gilman’s “Kings Point,” which begins as an offbeat expedition to an exotic land – in this case, a complex of modest Florida retirement condos where Gilman’s grandmother lived for many years -- and ends with a ruthless and heartbreaking vision of human loneliness and despair that rivals anything found in Scandinavian cinema or German philosophy. I don’t honestly know whether to recommend “Kings Point,” in the normal sense, because its vision of American aging is far from uplifting. But I do know that it’s a profoundly brave and unsentimental work of exploration, one that assumes that old people have all the same desires, dreams and needs as younger ones. And I know that it should be seen by those who build retirement homes and those who live in them, and most of all by those who might wind up in them one day. Which adds up, if I’m not mistaken, to pretty much everybody.