The conservative echo machine wants to compare Chuck Hagel to a failed Bush nominee, no matter the reality 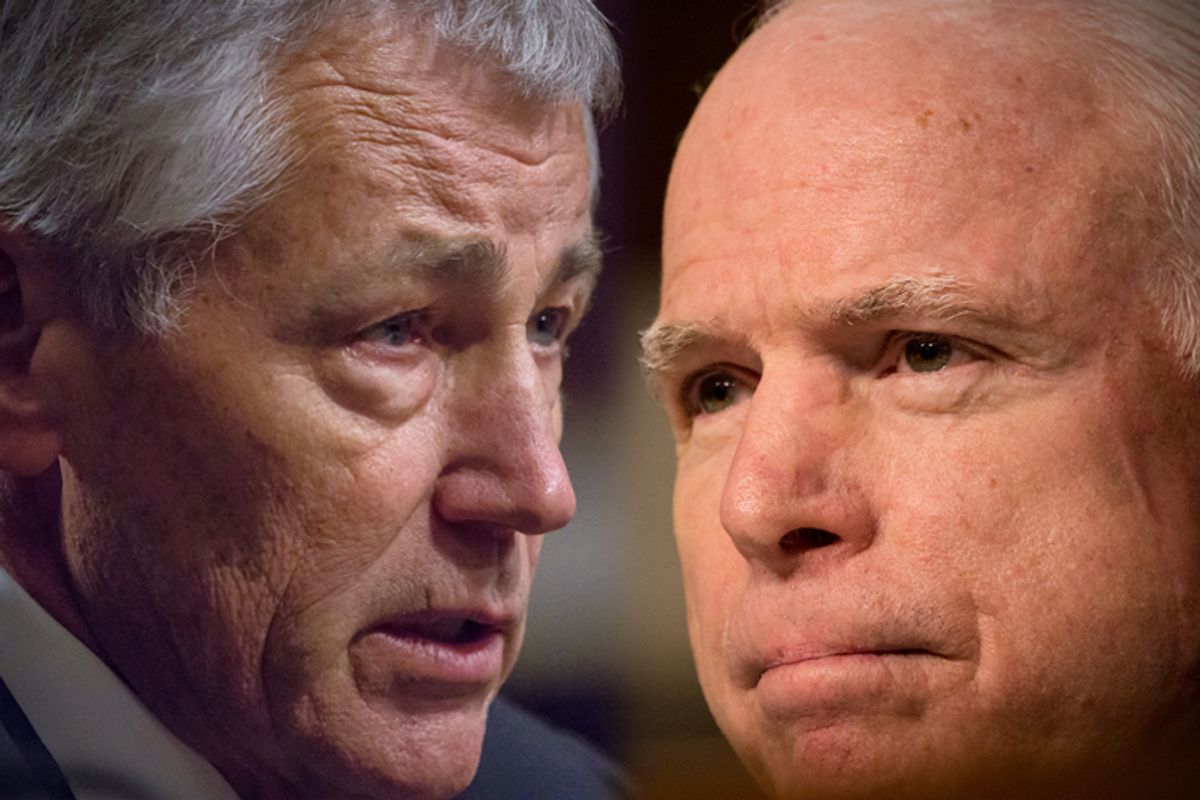 It’s sometimes easy to forget just how different the world of the conservative closed information loop is from, well, reality.

So it’s always worthwhile to point out examples of it, and this week supplied a doozy: the idea that Chuck Hagel is, as Bill Kristol put it, “Obama’s Harriet Miers.”

I’m not sure where the first instance of it appeared, but the Washington Post’s Jennifer Rubin used it in a Jan. 7 post. To her credit, I suppose, Rubin’s use of the Miers analogy at least fit the situation she described. The problem, unfortunately, is that what she described was completely removed from reality – a nomination so anathema to mainstream Democrats that Hagel might be forced to withdraw before a confirmation hearing. Of course, in actuality, every Democrat who took a position before Hagel’s hearing supported his nomination. Oops!

But that hasn’t killed off the increasingly wrongheaded Miers analogy. Not at all. It showed up after Hagel’s hearing from Kristol and from National Review’s Dan Foster, who called him “Harriet Hagel.”

So what’s so wrong with the analogy? Harriet Miers was the Supreme Court choice of a Republican president whose nomination sunk because conservatives believed she was insufficiently conservative, or at least not guaranteed to be sufficiently conservative. Sure, her qualifications for the job were dicey, and it’s possible she might have lost support over that, but everyone knew that the fight was about ideological reliability, and the fight took place within the president’s party.

Hagel’s nomination for secretary of defense is nothing like that. So far, at least, it’s a straight party-line split. Indeed, to the extent that there’s internal partisan argument, it’s within the out-party Republicans.

Nor did Democrats react to Thursday’s hearing by bailing on Hagel. It’s true that few people from any perspective thought he performed well, but Michael Cohen probably had the typical liberal response: that Hagel was unimpressive, but committee senators, especially Republicans, had made fools of themselves – that “[t]he hearing was, for lack of a better word, an embarrassment for all concerned.”

Now, I’m not arguing one way or another about who was right about Hagel. I’m just saying that conservatives – Rubin, Kristol, Foster – appear entirely clueless about what Democrats are up to.

And, really, how is one to do politics – real politics, not just partisan cheerleading – without any sense at all about what’s going on outside of one’s own cul-de-sac? It’s no wonder that conservatives have had a string of setbacks, both electoral and in policy showdowns. It’s hard to out-bargain someone when you hold a cartoon image of them.

So we get spectacles such as the “unskewed” debacle, in which by all accounts the Mitt Romney campaign and most of its supporters had no idea at all that Barack Obama was well on his way to a solid reelection. Or the decision to base the 2012 campaign on a few out-of-context quotations. Which seems to have been done in part because it was so easy to fire up Republicans inside the information loop that no one recognized that the campaign was offering next to nothing to anyone who didn't spend all day listening to talk radio. Republicans inside the loop may not actually have realized that the weak economy was far better than the disastrous economy that Obama inherited, and therefore mistakenly believed that the fundamentals of the election favored Republicans.

Or the failure of Republicans to get much of anything out of the fiscal cliff negotiations, and their apparent surprise when they realized that Democrats had considerable leverage and believed they had considerable power.

Not every conservative, of course, lives in a cocoon of Fox News, Rush Limbaugh and the rest of it. But the evidence shows that many of them do – and, again and again, we see the consequences of that bubble.