Are the Ravens responsible for the fall of the house of Edgar Allan Poe?

The city of Baltimore — and the Ravens — rely on their most famous writer's legacy. And they're letting it crumble 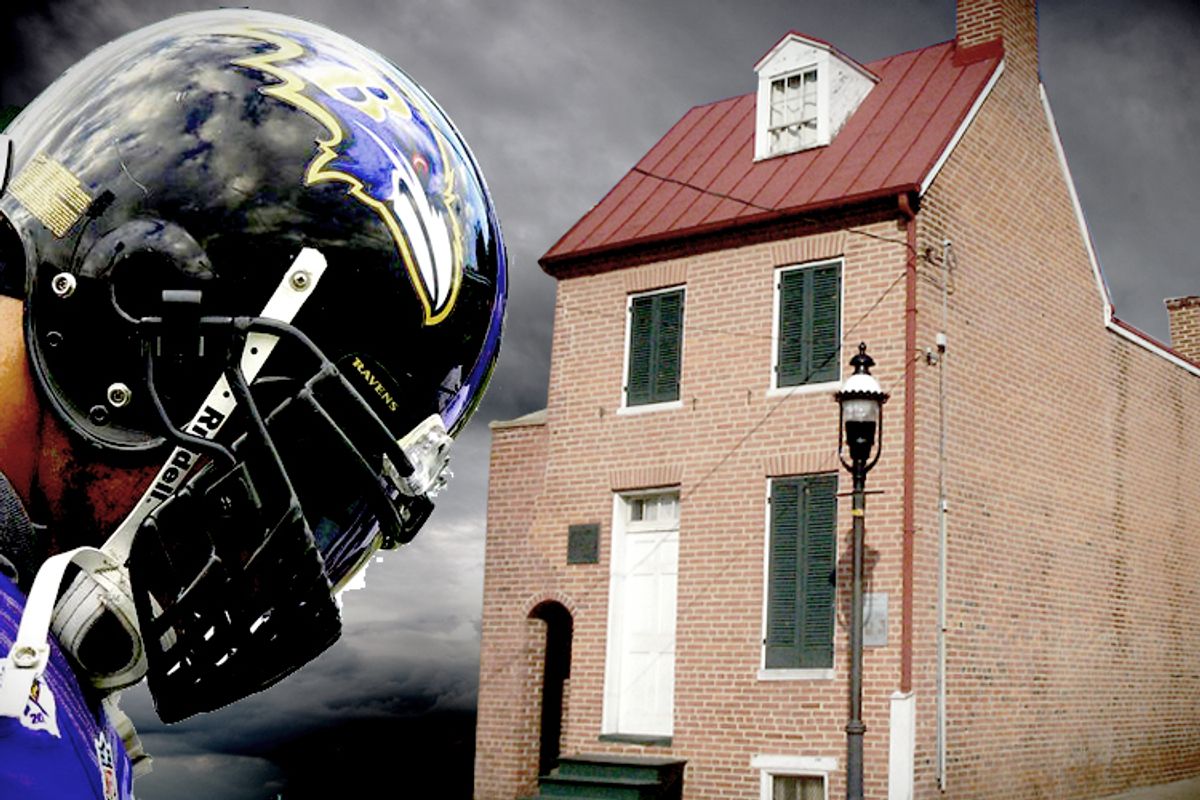 From the look of it, even book nerds are being drawn to this year’s Super Bowl, with the second-time appearance of the Ravens, America’s only football team named after a poem, Edgar Allan Poe’s “The Raven.” For many in the literary crowd, there may be no better team to root for, because there’s nothing more surprising than an American sports team paying homage to a literary icon.

There are many layers to the Ravens’ literary allusion. There’s the fact that the team’s mascot is a collective of three black ravens respectively named Edgar, Allan and Poe. There’s the fact that the Ravens play less than a mile down the street from where Edgar Allan Poe is buried at Westminster Burial Ground. Then there’s the uncomfortable knowledge that the Ravens’ star player, Ray Lewis, was implicated in a double murder. Not to make light of murder, but on a team named after America’s first star horror writer, in a city where they peddle little Eddie Poe dolls next to Ravens’ jerseys in gift shops, it seems apro-Poe.

At first, my response as a voracious reader and Edgar Allan Poe fan with absolutely no interest in football is to join others in delight of this piece of barely literary trivia. But this year there is something unsettling in the Ravens’ appropriation of Poe and his poem for what has been a surprisingly strong and fast brand building of a football empire. This year, Edgar Allan Poe’s own association with Baltimore is threatened: The city unceremoniously closed the Edgar Allan Poe House at the end of September 2012 and laid off the Poe house’s longtime director, Jeff Jerome, who has successfully operated the house on a shoestring budget, in a dangerous part of town, keeping it open and safe to visitors for decades. Not long after the Poe House closed, it was vandalized.

Edgar Allan Poe’s own star in Charm City shone brightly until recently. In 2009, Poe’s bicentennial year, the Baltimore Poe House celebrated with events all year, including a funeral on the anniversary of Poe’s death. A faux Poe body was carried in a horse-drawn carriage from his preserved historic home in West Baltimore’s aptly named Poe Homes to his burial grounds, where they gave him a funeral attended by hundreds in Westminster Hall. When Poe died the first time around, the literary community largely snubbed him. So in 2009, Baltimore Poe fans were rewriting history. They were also successfully drawing national attention to Baltimore’s literary heritage, and protecting their claim to Poe from the other cities up and down the East Coast (Richmond, Philadelphia and Boston, to name three), who also fight for a piece of Poe’s legacy.

But the tune changed soon after Poe’s bicentennial. In 2010, the city claimed that it could no longer afford the $85,000 a year it cost to keep the Poe house open, despite evidence that it had operated nearly without cost, building up a sizable rainy-day fund through events like Poe’s birthday and funeral. In the next breath, the city then commissioned an $180,000 study to come up with a plan to help the city divest its responsibility for the Poe house and restructure everything about the way the house was run. Based on the study, the City of Baltimore contracted the B&O Railroad Museum to create and install new exhibits and to consult with a new entity, "Poe Baltimore Inc.,” created by the City of Baltimore in October of 2012, to eventually operate the Poe House. This was all done with little transparency or opportunity for the public’s participation even though it's regarded as one of the city’s most popular and visited historic sites.

In June 2012, the Poe House study was released. And based on the plans, it’s clear things will forever change for the Poe House. When the house reopens, there will be limited hours, and tourists will not be able to drive to the house site themselves, park and get out for a tour of the house. Instead, according to the report, “In the revitalized Poe House, all visitors will be accompanied by a guide. Tours will begin at the B&O Museum with a narrated bus trip to the house that includes an introduction to Poe and an overview of the railroad’s role in his life. One component of the visit should be self-guided so that visitors can gain a sense of the humble nature of the house on their own. The visitor experience will end with a drive past Poe’s gravesite.”

This plan not only greatly reduces the number of tourists that will be able to tour the house per day, but it, in effect, turns the Poe house into a drive-by destination in a neighborhood that already sees too little positive attention or community focus. The Poe House is located at the end of a row of projects -- the Poe Homes -- now the oldest housing project in Baltimore’s history. The Poe Homes' grit was shown off in "The Wire" in the first episode and the show’s first dead body was unceremoniously discovered in the project. The new plan seems to make exhibits the focus of the Baltimore Poe experience, when, really, people are coming to experience the house, however humble, however poor, however few artifacts related to Poe’s life (and there are actually several impressive things, including Poe’s traveling desk).

I’m a longtime visitor of Baltimore’s Poe House. As a regular visitor, I find it difficult to understand what benefit this new plan will have for the house, for tourists or for the local community. It makes visiting the Poe house harder. It means fewer visitors, and therefore less revenue for the house. It might even make visiting the house less safe for tourists who arrive to closed Poe House doors, not understanding they have to start a tour offsite. Whether intentional or not, the new drive-through tour of the Poe house adds invisible labels to a neighborhood that doesn’t need any more stigma, when the truth is that with the exception of one robbery over a decade ago, tourists to the Poe house have had safe experiences. How does it look to have the tourists escorted in? It doesn’t look good. It isn’t good.

While this plan unfurls, in the shadow of the Ravens’ corporate- and taxpayer-funded M&T Bank Stadium, it’s impossible not to ask what role the football team ought to play in stewarding Edgar Allan Poe’s Baltimore legacy. They are making millions on the City of Baltimore’s literary heritage, filling their coffers with money made with the help of Edgar Allan Poe, his house and his gravesite. And yet, none of that revenue has been directed toward the literary landmarks that give legitimacy to Baltimore or the Ravens’ claim to their name. The Ravens have yet to step in and help support the Poe House, in its past or future incarnation, despite many, many calls and newspaper Op-Eds asking them do so. The problem? According to a spokesperson for the Ravens, the city hasn’t asked.

The Ravens' lack of interest thus far in supporting the city’s literary legacy is a travesty. But the City of Baltimore’s privatization of the Poe House is even more so, particularly when considering the investment it made in bringing a national football team to town. The city afforded the Ravens, but it can’t seem to afford to properly staff and run a small house that draws several thousand new tourists to Baltimore a year? While I wish all those involved in trying to save the Poe house from closure all the success in the world, this debacle should serve as a warning bell for those of us who care about our American cities' arts and cultural assets. Divestiture of properties and museums rich with history and heritage are a new popular way for cities to reduce their debt load created by the Recession, poor economic management and unscrupulous borrowing. In the case of Baltimore, it doesn’t even make sense; the city is already spending more money than it was two years ago, in their sloppy attempt to shirk their stewardship of Poe’s house.

Cities are selling off the hearts of their towns and burying the evidence under the floorboards. In Baltimore’s case, if the Ravens win, they’ll be spiking the football on Poe’s grave. Poe’s impact on Baltimore shouldn’t be reduced to a piece of football trivia. Nevermore.

A. N. Devers' work has appeared in publications including Bust, Departures, The Southampton Review, Time Out, Tin House, and online in Lapham's Quarterly, The New Yorker, The Paris Review, The Rumpus, and Slate. Her Tin House essay, “On the Outskirts” about Edgar Allan Poe’s houses, received Notable Distinction in The Best American Essays 2011. She is the founder and editor of Writers' Houses, a website exploring literary pilgrimage and writers' houses around the world. Follow her on Twitter at @andevers.