Corroded by scandal and undermined by shocking new science, America's killer sport may be nearing collapse 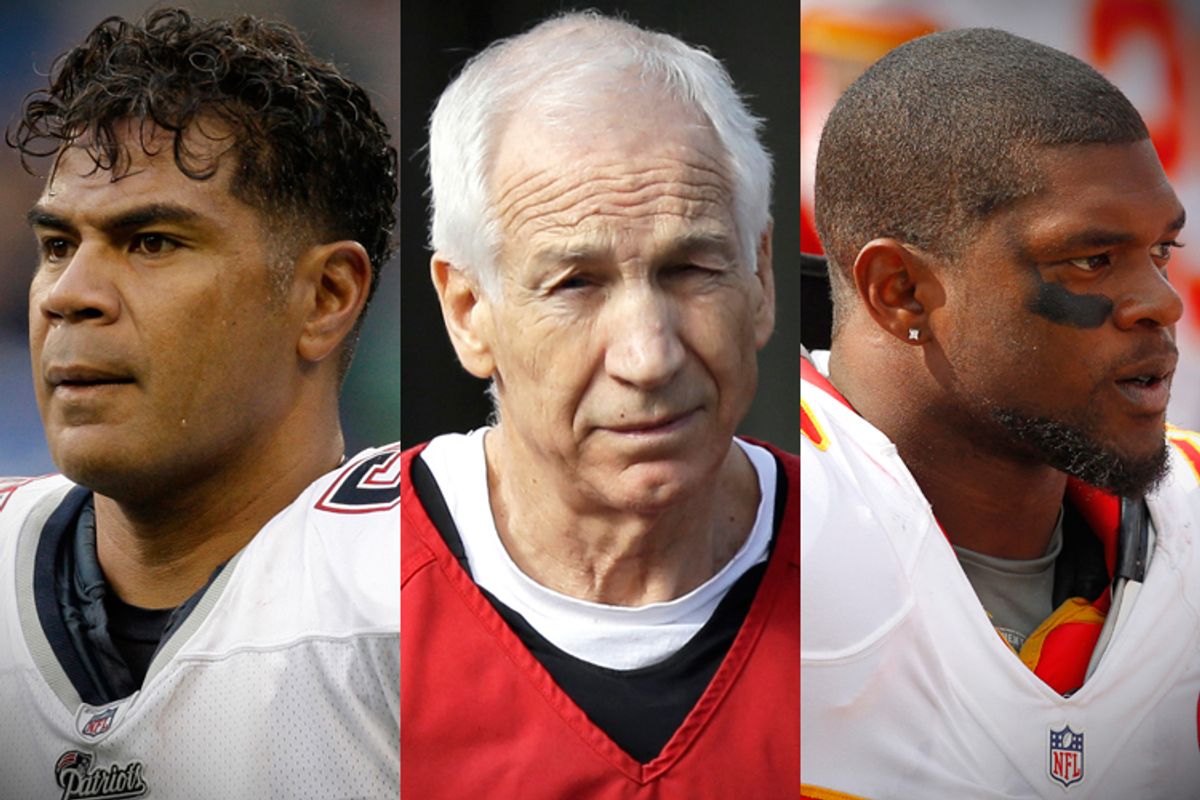 If baseball is, or at least used to be, a languidly paced sport played on an asymmetrical greensward that recalls America’s agrarian past, football is an industrial product of the modern age. Confined to a precisely measured rectangle that mimics the electronic screen, football plays out in staccato bursts of violence, interrupted by commentary and meta-commentary, near-pornographic slow-motion replays and scantily clad young women selling you stuff. Though I’m not sure that the commercials during the Super Bowl, or any lesser football game, really have much to do with consumer products as such. Instead, they’re selling an idea, the idea of the sort of person you must be if you’re watching the game: Funny, alert, sexually alive, a bit self-mocking, surrounded by friends and endlessly loyal to football, to America and to television.

Also, you’re apparently the kind of person who enjoys watching men do irreversible damage to each other’s brains. A bit of a buzzkill, I know. Football these days looks a lot less like symbolic or theatrical violence and more like the real thing. This brutal collision sport, which is essentially unique to North America, is deadly to those who play it and toxic in other ways to those who worship it. It has poisoned many otherwise honorable American campuses with corruption and hypocrisy: If Jerry Sandusky using his association with the revered Penn State football program as a cover for raping children is by far the worst example, abuses of a less dramatic sort are widespread in college football.

While the murder-suicide committed in December by Kansas City Chiefs linebacker Jovan Belcher certainly could have happened in another setting -- such things are entirely too common in American life – it reminded us that the hyper-masculine culture of team sports has a vicious dark side that's all too often inflicted on women. It also referred us back to that 1990s debate about the connection between spectator sports and domestic violence, which has not been anywhere near as conclusively debunked as football fans like to believe.

Football still rules the American sports and media landscape, and Sunday’s Super Bowl game will probably be the highest-rated TV broadcast of the year, as usual. In an age of narrowcasting, when very few spectacles still qualify as mass culture, the Super Bowl does. If you don’t care about the game between the Baltimore Ravens and the San Francisco 49ers, you’ll watch the halftime show; if you don’t care about football or Beyoncé, you’ll have the chance to dissect the most expensive and elaborate advertising campaigns of the year.

That position of cultural dominance likely won’t change next year, or the year after that. As the grotesque shadowplay about which Ravens and 49ers do or do not support gay rights should tell us, we treat the whole damn thing with much more seriousness than it merits. But the writing is on the wall for this bloated, behemoth sport, which in recent years has been plagued by scandal after scandal, and now faces a steady drumbeat of appalling medical news and troubling scientific research. Ta-Nehisi Coates of the Atlantic, who’s been tracking this issue for years, recently wrote a post predicting the “impending death” of football, starting with parents pulling kids out of Pop Warner leagues and trickling up to the demise of the NCAA and the NFL. It’s not impossible; given the grim news on the medical front, the sport as we know it either has to die or be so drastically reinvented it will barely be recognizable.

Super Bowl week used to be a giddy media circus focused on jocular, ultra-macho hype and human-interest stories at their most heartwarming and trivial. In recent years, with thousands of former players suing the NFL over brain-injury data, and the league itself gradually backing away from its tobacco-company posture of stony denial, coverage of football’s climactic event has become increasingly somber in tone. This week we had Ravens center Matt Birk, a Harvard graduate, wondering aloud if he had damaged his brain by playing 15 seasons in the NFL, while his hard-hitting teammate Bernard Pollard predicted that the league would no longer exist in 30 years. All of that came in the wake of news that former San Diego Chargers star Junior Seau, who committed suicide last year, suffered from chronic traumatic encephalopathy (CTE), a degenerative brain disease that had also afflicted at least three other ex-NFL suicides.

Birk and every other player in the league now know that his question was purely rhetorical: Medical researchers at Boston University have autopsied the brains of 34 deceased NFL players, and 33 of them were diagnosed with CTE. Even more recently, a new study has found evidence of measurable brain damage in five living former players, one of whom was a backup quarterback who played in only a handful of NFL games. It’s pretty simple: If you play football, you will suffer brain injury. How bad the effects will be is impossible to say; not every player ends up in a suicidal depression at age 43, as Seau did. But the damage is real and cannot be repaired.

President Obama recently remarked that he’d be reluctant to let his son play football, if he had one. He was being cautious and presidential, as usual; I’ll go with the more outspoken Pollard, who says he doesn’t want his 4-year-old son ever to play the sport from which he’s made his living. My son is less likely to be a loss to the pro game than Pollard’s, but I can guarantee you that he’ll never play football above the level of the beach or Grandma’s lawn. Far more important, I can also guarantee that millions of other parents are making similar decisions, or thinking about it very hard.

I’ve spent enough time in Middle American small towns to understand the “Friday Night Lights” ritual significance of football in many communities. No one expects the profound cultural power of the game to evaporate overnight. Still, my personal, emotional reaction is that anyone who still lets their kid play football in the face of all this evidence is nuts. There are many reasons why we can’t and shouldn’t ban football altogether, but as Pollard suggests, it’s likely to collapse on its own, and a whole lot more rapidly than anyone thinks. (As Lawrence Downes of the New York Times recently pointed out, boxing and horse racing were once dominant sports in American life too.)

It’s admittedly difficult to imagine that possibility now. For at least 20 years, football has had unquestioned supremacy among America’s major spectator sports. If the process wasn’t quite complete by the time baseball committed near-suicide with the 1994 players’ strike and the ensuing “steroid era,” that pretty much settled matters. Beyond the obvious fact that football is more fun to watch from the sofa than from the stadium, and brings people together on weekends when it’s too cold to spend time outdoors, various aspects of the game seemed to capture the ethos of 1990s and 2000s America on a symbolic level. At least at the pro level, football focuses on freakish excesses of size and speed (augmented by who knows what exotic chemical regimens), head-on collisions that rival a demolition derby, and overheated masculine melodrama surrounded by endless nattering. It’s like all the vulgarity, violence and excitement of American life served up in a colorful three-hour package on Sunday afternoon. With beer! No wonder people enjoy it so much.

I’m not immune to all this, by the way. I grew up as a sports fan, and passionately followed the 49ers through precisely the years when football was conquering the media landscape. (In case you think I’m faking it, Bay Area people, I go back to Jim Plunkett. I go back to Scott Bull! I go back to Norm Snead.) Watching “The Catch” alongside my dad -- Joe Montana to Dwight Clark, Jan. 10, 1982, sending the Niners to the Super Bowl for the first time -- was a highlight of our turbulent relationship.

I’ll probably give Sunday’s game a look, to see whether the team’s exciting young quarterback, Colin Kaepernick, can bring my former hometown another championship. But I’ve drifted away from football over the years, partly because it’s such an unforgivable time-suck -- a few minutes of action surrounded by oceans of advertising, high-end graphics and idiotic banter – and partly because the whole enterprise seems contaminated in so many ways. No doubt this is eccentric, but I feel roughly the same way about football as I do about the Catholic Church. There’s an ancestral longing there, along with a visceral disgust. In both cases, I sometimes think that maybe it was easier to live in more innocent days, when we didn’t know what we know now. Plenty of good and decent people are getting something from football (as from the Church), and part of me wishes I could go back. But it's too late.

Just as the Church in America will never be the same after the sexual abuse scandals, America’s dominant sport will never reclaim the air of cartoonish, ‘roided-up unreality it had a few years ago, when no one in sports journalism knew how to spell “encephalopathy.” All the loudness and emptiness of the Super Bowl spectacle can’t conceal the aura of doubt around the future of the game, or the collective shock of our discovery that the endpoint of this gladiatorial combat is actual death. Football is a central ingredient in the American narrative of masculinity, and it’s also the zillion-dollar linchpin of network television. But in case you haven’t heard the news, both those institutions are in crisis. Is it hard to imagine America without football? Yeah, but it’s time to start. It’s a killing game, and we have to let it die.