A tour bus carrying dozens of men, women and children from Tijuana, Mexico, crashed in the mountains of California 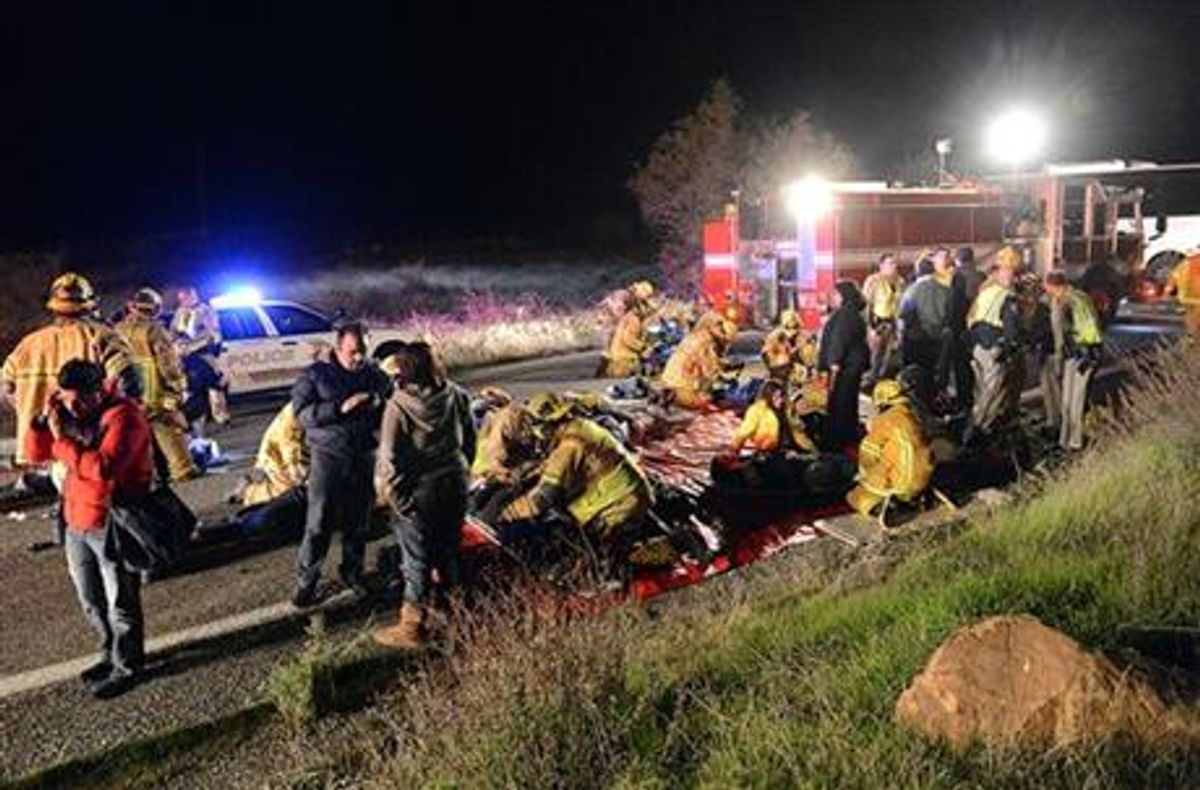 YUCAIPA, Calif. (AP) — A tour bus carrying dozens of men, women and children from Tijuana, Mexico, crashed in the mountains of Southern California, killing at least eight of the people who had spent Sunday at a winter recreation area, authorities said.

Crews worked through the night to recover the dead, but one body remained aboard the bus early Monday, said Rocky Shaw, a San Bernardino County coroner's investigator.

Officials hadn't been able to retrieve the body because the front end of the bus was dangling over the edge of the roadside.

Investigators were trying to pick up any personal property to help identify victims.

More than three dozen people were injured, and at least 17 were still hospitalized, including at least five in critical condition. One is a girl.

The accident occurred about 6:30 p.m. Sunday about 80 miles east of Los Angeles. It left State Route 38 littered with body parts and debris, and the bus sideways across both lanes with its windows blown out, front end crushed and part of the roof peeled back like a tin can.

One person in the truck was injured. The fate of the passengers in the car was not clear, but at least two people were in the Saturn, Lopez said.

Investigators will determine if mechanical failure or driver error was to blame. The bus driver, who survived but was injured, told investigators the vehicle had brake problems.

"It appears speed was a factor in this collision," Lopez said.

Lettering on the 1996 bus indicated it was operated by Scapadas Magicas LLC, based in National City, Calif. Federal transportation records show the company is licensed to carry passengers for interstate travel and that it had no crashes in the past two years. A call to the company was not immediately returned.

No one answered the door at the company's National City office in a sprawling complex that houses more than 1,300 storage lockers and about 30 small offices. Greg Etter, general manager of Acropolis Space Center, said the company didn't run buses out of the facility. He declined to comment further on the tenant.

Jordi Garcia, a manager for InterBus Tours, said his company organized Sunday's trip. He told U-T San Diego that 38 people departed Tijuana at 5 a.m. for a day of skiing at Big Bear.

"The information that we have is that the bus' brakes failed and the accident occurred," he said.

Investigators had not yet obtained the passenger list from inside the bus.

InterBus Tours offered condolences to all those affected through a statement posted on its Facebook page, which also had a posting from last week advertising the trip to Big Bear, a lakeside recreation area at an elevation of 6,750 feet in the San Bernardino Mountains.

"InterBus Tours and its entire team are working to support our customers and their families who unfortunately suffered an accident in the mountains of Big Bear in San Bernardino. Personnel from InterBus are in our offices as well as in hospitals where we know authorities have taken the injured," the statement said.

It noted the vehicle was subleased and has insurance to cover such an accident.

After the crash, it took nearly two hours to clear all the people who could be transported to hospitals and go through the wreckage, said Kathleen Opliger, incident commander and San Bernardino County fire battalion chief.

Route 38 runs through San Bernardino National Forest to Big Bear. The accident occurred as the bus was headed south and leaving the forest.

"It happened so fast I don't know how it all happened," a passenger who declined to give her name told the San Bernardino Sun (http://bit.ly/XiWWdu). "This was supposed to be a good day out with my companions and then this happened."

Patients were taken to several hospitals with injuries ranging from minor to life-threatening.

Jennifer Resch-Silvestri, a spokeswoman for Kaiser Permanente Medical Center, said the hospitals began working together before dawn to better track victims and make it easier for family members to learn the condition and location of relatives.

The National Transportation Safety Board was sending a team to the scene.

The California crash came less than a day after a bus carrying 42 high school students and their chaperones slammed into an overpass in Boston. Massachusetts state police said 35 people were injured after the driver had directed the bus onto a road with a height limit.