Baltimore Mayor Stephanie Rawlings-Blake joined in the fun, dancing and singing alongside the fans 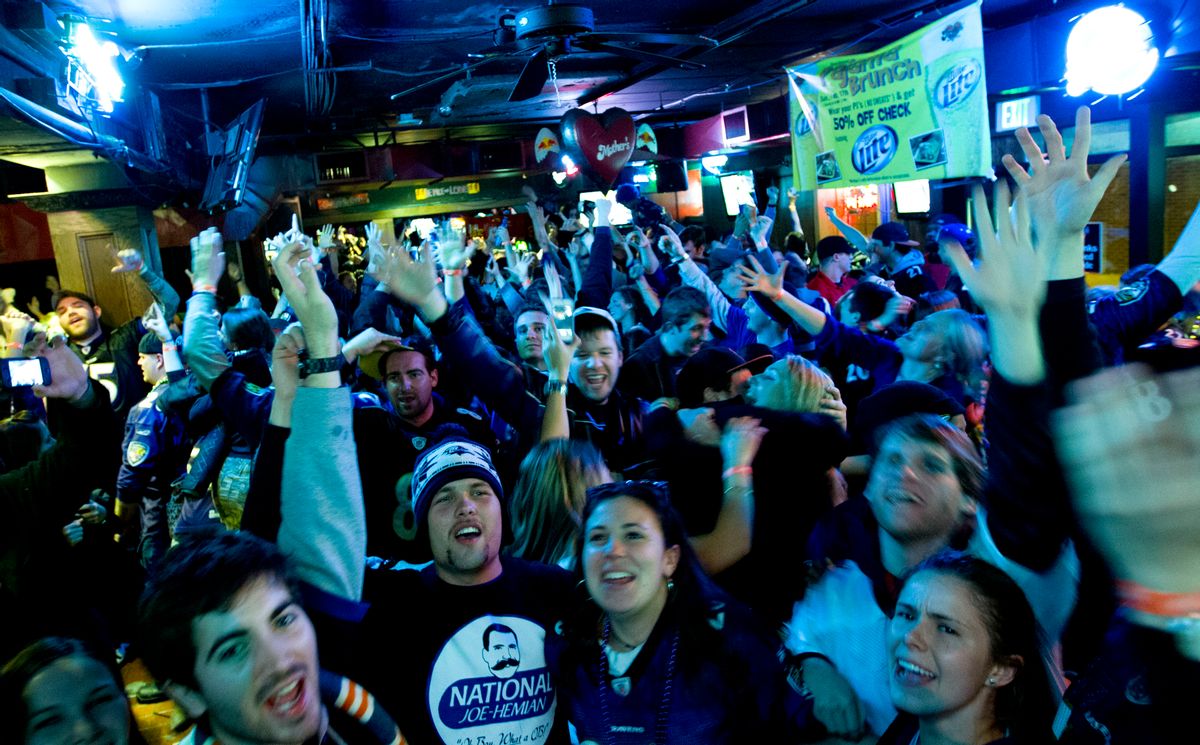 BALTIMORE (AP) — Hundreds of giddy Ravens fans poured into the streets Sunday night, whooping, hollering and high-fiving complete strangers as they celebrated the team's 34-31 victory over the San Francisco 49ers.

On the far opposite coast, however, a spirit of hope and anticipation rapidly faded into sullen disappointment as dejected 49ers fans tried to absorb their team's loss.

In the East, Patrons who packed into Mother's Federal Hill Grille in Baltimore to watch the Ravens' second Super Bowl appearance since the team arrived in the city in 1996 jumped up onto the bar and began belting out a rendition of the Queen song "We are the champions."

"I love this team. I love this city!" screamed Andrew Bieler, 21, shortly after the game ended.

Ashlee Tuck, 28, shouted "Yes!" and alternated between kissing her boyfriend and dancing as fans streamed out of the bar.

Michael Falls, 25, said he plans to take Monday off from his accounting job and his boss was going to do the same.

Baltimore Mayor Stephanie Rawlings-Blake joined in the fun, dancing and singing alongside the fans.

"The Baltimore Ravens once again demonstrated strength, poise, and perseverance as they prevailed in Super Bowl XLVII," Rawlings-Blake said in a statement.

In a live interview from New Orleans on WBAL-TV, Rawlings-Blake said the city will hold a parade in the team's honor on Tuesday that will start at City Hall and end at the Ravens' stadium. She urged fans to celebrate peacefully, while local television footage showed police mounted on horseback circling the crowds to maintain order.

Fans came decked out in purple for the game, many arriving at bars hours early. Women arrived with their nails painted purple. Men wore purple Mardi Gras beads. There were purple-feathered boas; purple, black and white camouflage pants; and a sea of purple and black jerseys.

It seemed no jersey was more popular than that of retiring middle linebacker Ray Lewis, No. 52. And whether they were wearing his number or not, fans said they wanted to win for Lewis, the only current player who started with the team when it came to Baltimore in 1996.

"We have to do it for Ray. It's not all about Ray. It's 90 percent for Ray, 10 percent for the city of Baltimore," said Darren Love, 40, an off-duty police officer clad in zip-up pajamas with the Ravens' logo in addition to a purple wig.

Fans at Pickles Pub, mere blocks from the Ravens' M&T Bank Stadium, cheered when Lewis was shown on television at the start of the game. And the cheers continued when the team scored the first touchdown. The Ravens never trailed.

Chrissy Ramirez, 22, a first-grade teacher, was one of the fans who emptied out onto South Charles Street in the Federal Hill neighborhood after the win. Ramirez, who was wearing the No. 5 jersey of Ravens' quarterback Joe Flacco, Ravens earrings, and a hat shaped like a Raven head, said she was overwhelmed by the victory. She said she planned to "be ecstatic the rest of the week."

Ecstatic was the opposite of how fans felt in San Francisco's Mission Hill district, where fans stumbled dejectedly into the streets after their team's loss.

As the game drew to an end, dozens of police officers and sheriff's deputies — in patrol cars and on foot, motorcycle, and horseback — fanned out on both sides of the country to watch for signs of trouble, but neither city reported any serious problems.

"Most of the crowds are dissipating," Baltimore Police spokesman Anthony Guglielmi (pronounced Goo-YELL-me) said shortly after midnight. Guglielmi said the crowds grew to several thousand before people slowly started to peel off and head home.

The streets in the Golden Gate city also were relatively calm Sunday night, unlike after the San Francisco Giants' World Series victory in late October, when a city bus was set ablaze, cars were overturned and bonfires erupted in trash containers and on the streets. About three dozen people were arrested following that victory.

"Citywide, everything seemed to be pretty good" Sunday night, Officer Carlos Manfredi said. "We did have a couple of flare-ups in the Mission District, but otherwise everyone seemed to be behaving themselves."