GOP to Reid: Thanks for caving on filibuster reform, we will now destroy the Consumer Financial Protection Board 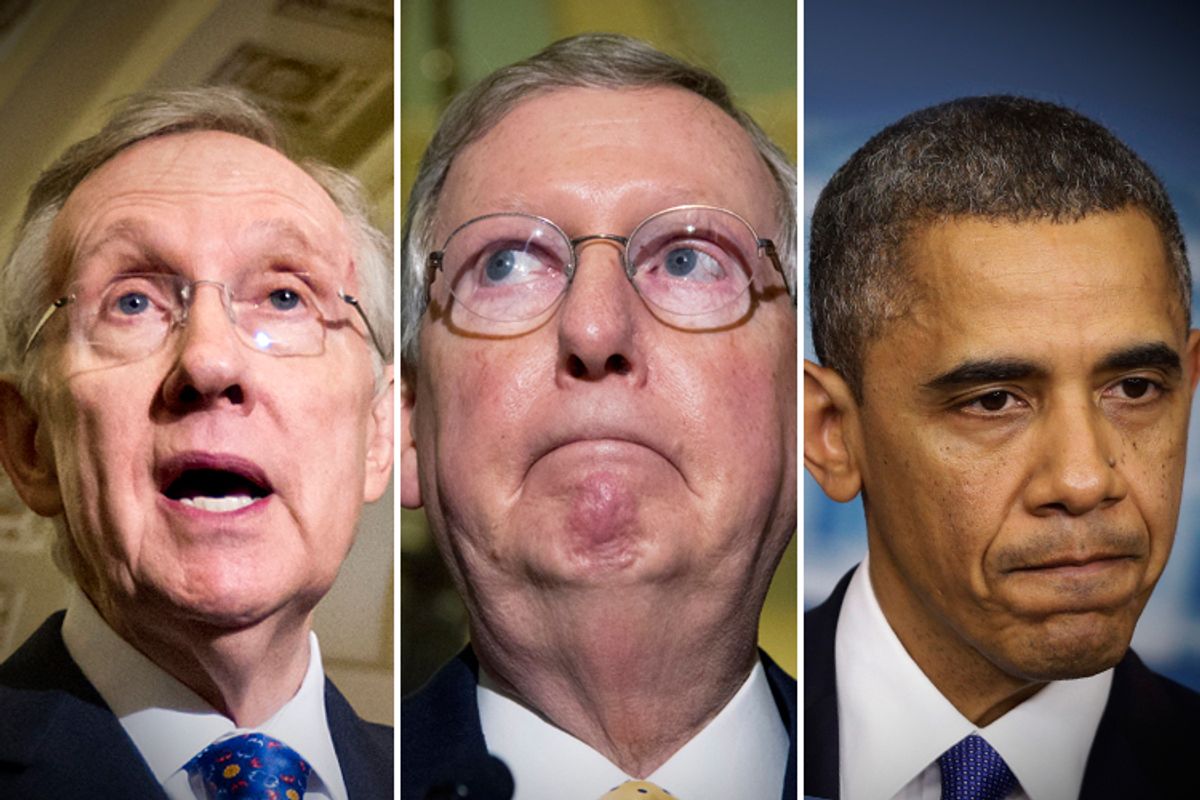 It was very fitting that pretty much immediately after Harry Reid ended the possibility of filibuster reform in the more-sclerotic-than-ever U.S. Senate, a Republican appointee-run court effectively killed the recess appointment. Reid cut a "deal" on filibusters that actually strengthened the 60-vote threshold, by legitimizing what had been widely seen by non-senators as unprecedented abuse of Senate rules. All the deal does is speed up the process of breaking a filibuster with 60 votes, making the act of forcing a 60-vote threshold on all Senate business -- something that rapidly became the new normal -- even more painless than it was before.

Right after Mitch McConnell was granted unelected co-leadership of the Senate, the D.C. Court of Appeals announced that we've been doing this whole recess appointment thing all wrong for the last century or so, and that the Founders only intended for presidents to make recess appointments during "the Recess," between sessions, and only of positions that became vacant during that recess. This allows Senate Republicans to totally prevent Barack Obama from appointing anyone to the National Labor Relations Board and the newly created Consumer Financial Protection Bureau. Not just "people Republicans disapprove of," but anyone at all, because Republicans disapprove of those two agencies carrying out their missions.

Now, naturally, after Reid cut the deal allowing them to do so without consequences, Republicans wasted no time in announcing their intention to prevent Barack Obama from appointing anyone to run the CFPB unless he effectively restructures the agency to not serve its purpose. This is, as a couple of others have noted, effectively "nullification," and it's generally frowned upon by fans of functioning republican forms of government.

The signs of the total normalization of what would have been considered a shocking violation of political norms just a few years ago are all over the Reuters story on Republican intentions. The story presents it as a typical political fight, one side against the other, both lobbing accusations and impugning the motives of the other. One subheadline reads, helpfully, "POLITICS AT PLAY." Typical Washington, always with the politics! Why can't No Labels just get these jokers to get along?

The story begins by quoting Republicans, who have objections to the board, and then quoting Democrats, who say they think the board is a good thing. Toward the end is the part that should've been near the top, along with some indication that it's an insane state of affairs:

For the most part, Republicans and business groups have said they do not oppose Cordray personally, saying he has been accessible and the bureau has tried to incorporate comments from both industry and consumer advocates in its rules.

But the senators said "common sense reforms" are needed before they will confirm anyone to lead the bureau.

In other words, 43 Republicans -- not a majority of the Senate, at all -- have pledged to block the appointment of someone they have no real issue with, because they are demanding the right to change the structure of the agency entirely before they will allow it to function. A small minority in one of America's two congressional bodies is demanding the right to fundamentally rewrite, on their own terms, a law passed by both houses and signed by the president, because they really dislike it. That's not normal, "what are you gonna do?" politics. That's setting an insane precedent.

Imagine if 41 Democratic senators announced that they were going to block the appointment of any drug czar until the Office of National Drug Control Policy was "reformed" to make it an agency tasked with supporting the legalization and then cultivation and sale of marijuana. Imagine that they were able to prevent the ONDCP from functioning entirely. (Imagine also that the "drug czar" actually had an important job that mattered and came with actual responsibilities beyond the production of silly propaganda.) There would be, most likely, some outrage from the objective political press. A bit more than we're hearing now, in this world where "filibuster reform" is considered a far-left bugaboo and the blatant attempt to extralegally kill the CFPB is just "politics."

The idea of changing Senate rules by simple majority vote is usually referred to as "the nuclear option," because forcing the Senate to operate as nearly all other legislative bodies in the world do is considered an act of provocation so extreme that it would force the minority to retaliate by any means necessary. But they would actually have to think pretty creatively to find new ways of totally obstructing all Senate business, because right now they are doing a very good job obstructing most of it, as their response to the Democrats' shamelessly "winning elections" and "attempting to pass legislation and appoint judges and regulators." While forcing a Senate rules change has a nickname highlighting how incredibly unprecedented it would be, there is not yet a press-friendly term for the Senate minority trying to force legislation to be rewritten to its specifications by blocking an agency from functioning until they get their way, so maybe someone should get on that so people on "Meet the Press" care.