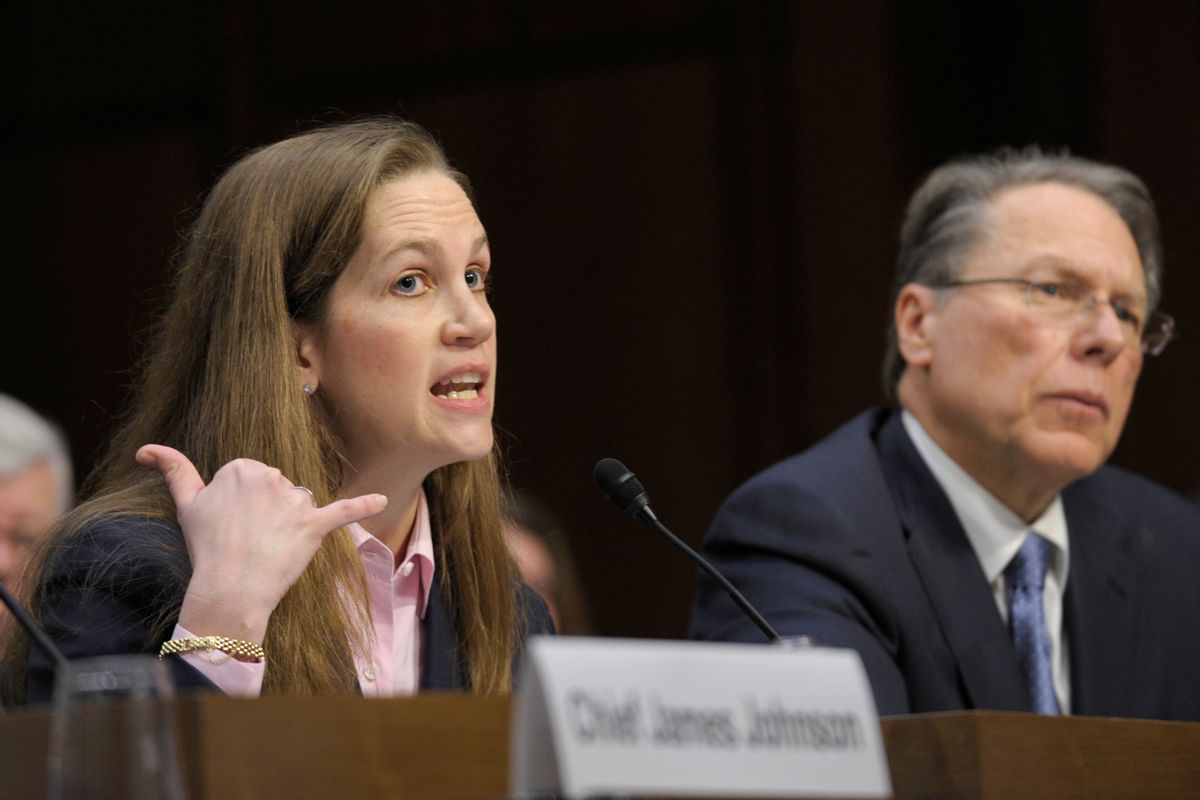 Just when we thought the gun lobby’s approach to ending gun violence couldn’t get any more ridiculous, last week we were introduced to Gayle Trotter. A fellow at the conservative Independent Women's Forum, Trotter unveiled to the Senate Judiciary Committee the latest canard that curbing access to guns would create an "undue burden" for women who would "choose" to defend themselves from violence. Her assertions are illogical at best and downright dangerous at worst. Two aspects of her testimony are particularly troubling: the appropriation and misapplication of pro-choice language to describe the need for unfettered access to weapons and the notion that guns make the world a safer place for women.

It’s puzzling that Trotter decided to use the loaded language of choice and undue burden to argue that women must have access to assault weapons and high-capacity magazines. The concept of undue burden has done more to roll back access to abortion than perhaps any other legislation. It’s derived from the Supreme Court’s 1992 decision in Planned Parenthood v. Casey, which gave states the right to restrict abortion as long as their laws didn’t create an “undue burden” for women. Over the past two decades, we have watched as states across the country have determined that there are actually very few burdens that are undue: 72-hour waiting periods; mandated parental or court consent; involuntary, and sometimes invasive, ultrasounds; lectures based on factual inaccuracies and disproven pseudoscience; and travelling hundreds of miles from home to access care.

In many parts of the country it is far easier to obtain a gun than it is an abortion. In 35 states women are required to receive counseling before an abortion is performed and 26 of them require women to wait at least 24 hours before obtaining the procedure, meaning at least two separate trips to the clinic. Only 12 states require some type of waiting period between the purchase and acquisition of a gun, and in some cases those laws only apply to federally licensed dealers. How’s that for a pro-life agenda?

Before she wielded such historically charged language, Trotter should have made sure it would actually help make her case. Is she suggesting the courts apply the same extremely low undue burden standard to guns that they have applied to reproductive health care? By that logic, mandatory background checks and restrictions on high capacity magazines and battlefield-appropriate automatic weapons should hardly be contentious.

But as a woman and a sensible human, what I find even more troubling – and outright erroneous – is the claim that a society with more guns is a society safer for women. A growing chorus of gun advocates have dusted off outdated gender stereotypes of women as vulnerable and defenseless, exploiting them to make the case for fewer restrictions on guns. Arguing that without guns women will be less safe perpetuates the notion that violence against women at the hands of men is an inevitable reality of our culture. It suggests that attempting to stem violence at its root is futile and the only solution is to go “all in” on guns—arm everyone. I am offended and frightened by the notion that what is needed to keep women and children safe is an increased presence of the very weapons responsible for so many deaths of women and children every year.

This claim falls along the dangerous spectrum of (il)logic that says we simply should dress more modestly, drink less, stay at home after dark, and arm ourselves with mace and self-defense skills to avoid being the victims of violence. But if those things don’t work, we should just tuck an automatic weapon in our purse or under our pillow for when we inevitably will have to fend off a band of heavily armed attackers.

How is this the answer to our epidemic of violence against women? Shouldn’t we be demanding changes to a culture that normalizes violence, instead of trying to convince people that we’d be safer if more of us were armed with deadly weapons?

In her testimony, Trotter referenced women who used guns to defend themselves against violent intruders—guns that would not be banned under the proposed legislation. Trotter’s anecdotes can be compelling. But you know what else is compelling? Evidence! Research! Logic!

In an editorial over the weekend, the New York Times called into question Trotter’s suggestion that bands of armed home intruders are a common problem facing women and provided a wealth of statistics to illustrate that the presence of guns greatly increases the risk of lethal violence against women. Mayor Bloomberg’s Mayors Against Illegal Guns campaign will soon release statistics that illustrate how much less safe guns make women. Trotter conveniently ignored the research that shows that in states that that require a background check for every handgun sale, 38 percent fewer women are shot to death by intimate partners. She failed to mention that in the United States, women are 11 times more likely to be murdered than women in other high-income countries with sensible gun restrictions. She didn’t tell us that the presence of a gun in a domestic violence situation increases the risk of homicide for women by 500 percent.

As Bloomberg’s campaign points out, Trotter attached a list of 21 self-defense incidents that occurred over the course of two years and four months to her written testimony. In that same period, 1,900 women were murdered with guns by current or former intimate partners. The women Trotter speaks of are outliers in a society where women are far more likely to be injured or killed by someone they know. More guns won't fix this. The proposed gun legislation alone won't rid us of our culture of violence, but it is a critical step in the right direction. And for that matter, so is passing the Violence Against Women Act (VAWA), a legal commitment to protecting women from assault, adequately punishing those who harm them, and demanding an end to a culture where women are the all too frequent victims of violence. Trotter puzzlingly opposes this legislation.