Introducing Africa to the OMG crowd

I balked when Instagram picked our feed. Now I realize it's an incredible way to reach the people we usually can't 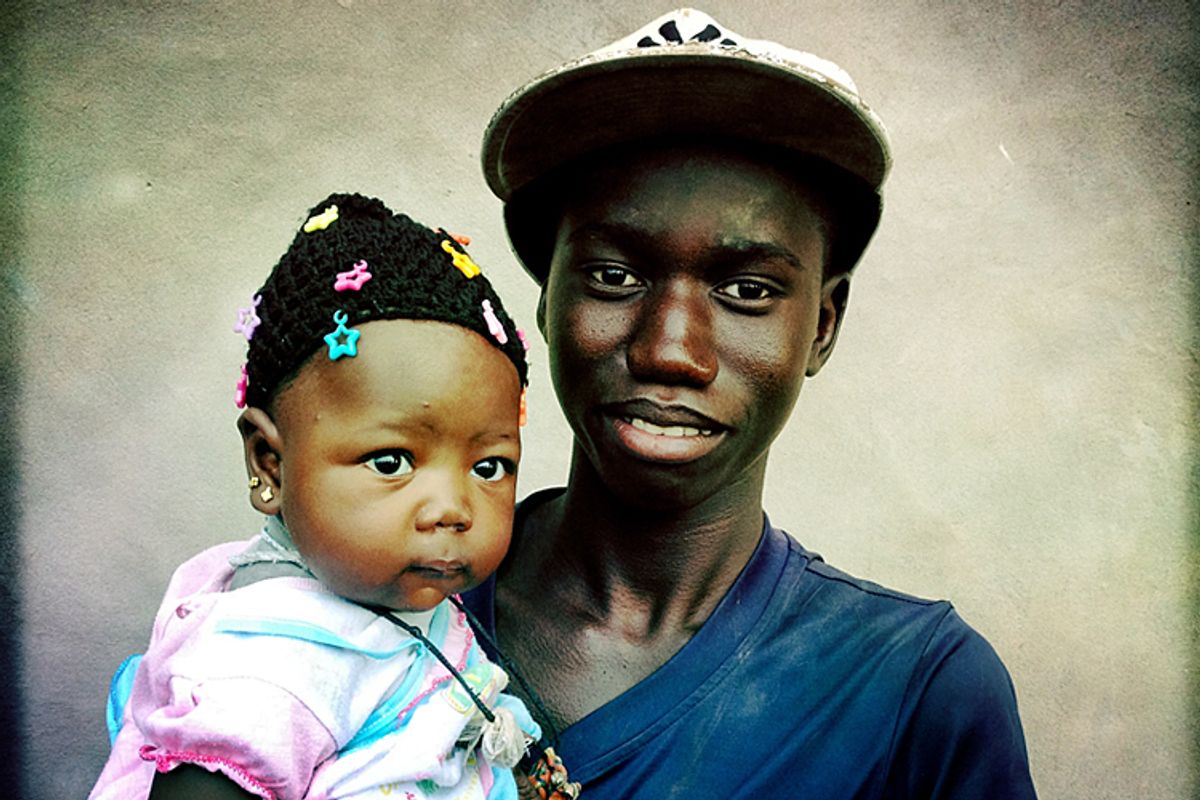 A few weeks ago, Instagram added Everyday Africa (Tumblr) – a project I co-created with writer Austin Merrill to showcase daily life from across the continent – to its list of suggested users. I had been idly watching our followers the day it happened. We were at 990, and I was hoping we would finally hit 1,000. Suddenly, it jumped to nearly a new follower every minute. By the time we finished our two-week stint on the list, we had 17,000 pairs of eyes watching us. (After taking over the New Yorker's Instagram account this week, we gained another thousand plus).

Before our newfound popularity, most of our followers came from photography and NGO circles; most of our “likers” and “commenters” were people I knew or knew of. They commented with things like “great portrait,” shared their own African memory, or remarked on technical aspects of the pictures. Now, our followers are complete strangers of a demographic I can only guess at, with handles like “bieber_fever_2000” and “cuteeeelinda91.” The comments now have words (if we can call them that) like “OMG” and “adorbs.” Relaxing on banana leaves in Busano, village on the slopes of Mt. Elon, Uganda. Photo by Shannon Jensen. Instagram: @shannonje

It’s tough to wrap my head around all this: Suddenly, my life as a professional photographer includes watching people LOL at my photos in real time. There was, at first, a degree of snooty indignation on my part – the final straw on that front was when “dude_also_known_as_a_boy” commented on a beautiful picture by Laura El-Tantawy of a young boy floating in the Nile with the words: “I don’t really like it.”

Who is he to say that, I thought, and why would he bother? Then I clicked over to the profile of “dude.” I saw the user photo of a preteen who had most likely grabbed his parents’ smartphone, a stream of cat pictures, and a profile description that includes “My favorite colors are red and green. My favorite holiday is Christmas.” Eleven-year-old Nader, an Arabic name meaning “unique”, floats on a piece of Styrofoam in the River Nile in Cairo, Egypt. Photo by Laura El-Tantawy. Instagram @laurael_tantawy

Fine, I thought. He’s a kid – he gets a pass. I brought all this up with my fiancée, and as she often does, she pointed out what I was missing: The OMG Crowd is exactly who we’re after with this project: people who are young and experiencing Africa for the first time, vicariously, through pictures. In one form of news or another, they will likely see starving Somalis and Kalashnikov-wielding Libyans – and while pictures like those serve an important purpose, I hope they see ours as well. And if they are the target audience, then Instagram is no longer a promotional tool: It is the ideal medium.

I have very different goals with each of my photographic projects. The goal for my work on cocoa and conflict in Ivory Coast was to publish in news outlets, as I feel the reality of where our chocolate comes from is an underreported topic. With my work on Energy Poverty, I have been lucky to publish widely, but the real goal was to reach a specific audience – the energy and development sectors – through exhibitions and events.

How is Everyday Africa different? Last week, I was at my cousin’s house for family game night, and his 12-year-old daughter wouldn’t stop playing with her parents’ phone. “I’m on Instagram!” she cried in protest when they told her to put it away. I told her about Everyday Africa – she was in disbelief that I also use Instagram, was amazed by the number of followers we’ve gained, and immediately began scrolling through our pictures.

“dude_also_known_as_a_boy” may not like Laura’s photo, but he, like my young cousin, added us to his list of followers and is now seeing our images. I hope that he gains a more nuanced view of Africa. I hope that, through looking at a picture of a woman hanging laundry in Uganda or a man in suit-and-tie in South Africa, he understands that people aren’t always so weak with disease and starvation that they can barely swat the flies gathering around their faces, or arguing over a Coke bottle. (Admittedly, these were my impressions before I landed in Ghana at age 22). The bulk of the comments our photos receive are simple – loving the pictures or hoping to visit Africa in the future – but there is also a surprising trend of unconditional pity. While a few of the photos on our feed are from refugee camps, most are of far more common, innocuous situations: street scenes, scenic views, people hanging out, families, people making things, people eating things. Still, on a number of pictures, people have made comments including “we should help them,” “I feel bad for them,” or simply “sad.” This reminds me of the time I showed pictures of West Africa to my family after returning from a trip. At the end of a presentation that was predominantly smiling children and daily life, my great-uncle asked, “So how can we help these people?” My theory is that, unfortunately, the image of the “African in need” is so heavily imprinted on the Western conscious that we often ignore any image that shows the contrary. All of this is a reminder of the mind-set our project is up against.

I like to think that now is the time for the world to be ready for less otherness, less exoticism. In a globalized world, where Africa is often noted just as much for its economic opportunities as it is for its crises, isn’t it time we see it not in extreme terms, but as just another place? If we make the claim that the communication revolution has made everyone our neighbor, then it’s time to photograph Africa in a friends-and-neighbors style.

I’m not suggesting that we ignore Africa’s problems. In fact, I think that “the stream” – Instagram, Flickr, EyeEm, etc. – can simultaneously normalize far-flung corners of the world, even while stressing serious issues.

Here is how the stream works as a story narrative, and how I hope it makes Everyday Africa relevant. Imagine you are an American Instagram user – in this case, let’s say you just finished high school and are about to start university. You and your friends post photographs of your community. As your friends go your separate ways, they post photos from their own colleges, as well as their new towns and cities. Slowly, your world expands, as you see parts of the states you’ve never traveled to. You start to look at their friends’ photos as well, and at the hashtagged cities they live in.

Perhaps one of them studies abroad, and you learn about a new country by viewing his or her photos. They hashtag #kenya, and you click it and, in addition to seeing what Kenyans are photographing, you also come across Everyday Africa. You learn about daily life across the continent, and the thought crosses your mind: in many cases, their lives are not so different from mine. In the course of your ethereal wanderings, you come across the less fortunate as well. You see Shannon Jensen’s photos on Everyday Africa, and click the #southsudan tag. Suddenly, you find John Stanmeyer’s devastating images of neglected tropical diseases. But, instead of reacting to it as you would a traditional photo essay – which, I hate to admit, can often feel like it may as well have taken place on Mars – the meandering way you came across it brings a simple, powerful revelation: this is real, this happened, and it happened in my world, and in the context of everything else that happens! Not to complain too much about my profession, but photo essays, by comparison, take place in isolation. Viewers enter a website, open a book, or walk into an exhibition space; they confront flowery declarative text; they see exotic lands and exotic situations; and then they emerge and return to their day. Photo essays inform us, but I fear that their beginning-middle-end structure is too finite, too removed. I worry that the lingering impact of a photo essay is its otherness.

But within a single stream, we can experience the context of crisis side-by-side with daily life. Scrolling through the Everyday Africa feed recently I jumped from a celebration in Cape Town to a night out drinking in rural Uganda to a Christmas party in Lagos to a Malian refugee in a Burkina Faso camp. (Similarly, not long ago I reeled when scrolling through photographer Benjamin Lowy’s feed on Instagram, as it went from pictures of his kids in Brooklyn to mourners of the Sandy Hook tragedy in Connecticut, and then back to New York City daily life.) There is a subtle but important difference between learning about a tragedy on a news station versus a stream: in one it seems to have happened elsewhere, and in the other it seems to have happened nearby. Heading to a Christmas party in Makoko, a slum on stilts in Lagos, Nigeria. Photo by Glenna Gordon. Instagram: @GlannaGordon So -- despite the occasional abrasive comments and the agonizing jealousy of the “likes” system -- I’m thankful that photographers have this platform through which we can reach our audience directly. My colleagues and I need a means of reaching the OMG Crowd – ironically, the most important demographic to show our photos to is the one we generally miss with gallery shows and magazine spreads. “sportygirl1616," “youareperfecttome28," “stevencriedwolf," “lickxx_my_instagram," “doggpatch," “dreadlocksgalore," “cookiemonster1909," and all the rest – let me just say publicly that I hope you’re learning from our pictures, and I’m thankful that you’re along for the ride.

For a highlight reel of Everyday Africa's work, watch the slideshow below.