John Lindsay, Ed Koch and the end of liberalism 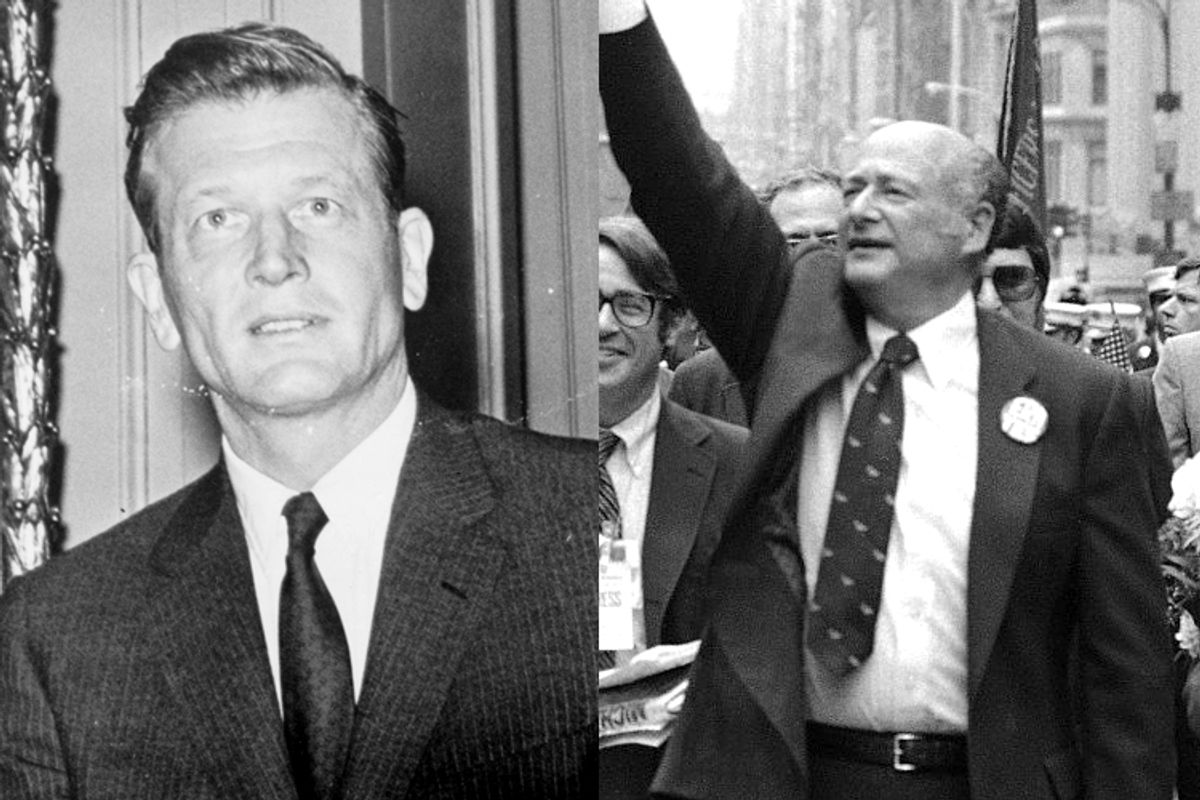 The mayoral career of Ed Koch was so long ago that political writers on Twitter joked that young colleagues only learned how to pronounce his name – “kotch,” not “Coke” like the infamous Koch brothers – last Friday, upon the news that he died at 88. But Koch’s death made me think even further back, to an earlier New York mayor, John Lindsay.

Growing up in New York, I saw the city of liberal Republican Lindsay become the domain of conservative Democrat Koch, all before I turned 20, as bitter battles over race, education, unions, cops and crime shattered the urban birthplace of the New Deal. As New York gathers to remember Koch at a memorial Monday morning, it’s worth thinking about the two mayors, as bookends to an era that began with optimism and ended in cynicism about the multiracial promise of urban America.

A moderate silk stocking Republican elected mayor in an epic 1965 election, Lindsay moved left and became a Democrat over the course of his career. A liberal Democrat, Koch moved right. He never left his party, although he occasionally supported Republican candidates, including George W. Bush and Dick Cheney in 2004, largely because he liked their hawkishness on Israel. The two New York mayors’ journeys tell the story of liberalism’s demise, largely over issues of race, crime and, more than we usually acknowledge, Israel.

The patrician Lindsay defeated the decidedly not-patrician Abe Beame, the son of a socialist, who himself became a loyal New Deal liberal. But the liberal Republican also had to fight William F. Buckley, running a backlash campaign against the license supposedly unleashed by liberalism. That was the year of Selma, but also of Watts. (Harlem had endured its own riots a year earlier, triggered, like the Watts eruption, by police brutality.) Lyndon Johnson launched his “War on Poverty” early that year, but ended 1965 with a federal “War on Crime,” to respond to concerns about a wave of lawlessness.

The charismatic Lindsay became a Rorschach test for how one saw New York in the ‘60s and ‘70s, and maybe for the nation in that entire era. Liberal journalist Jack Newfield, a Lindsay admirer, put it this way in his 2000 obituary: “Lindsay was great on race, but not so great on class. He lacked a certain empathy for the white ethnic communities of the city ... The mayor who wanted reconciliation so deeply accidentally created contention and white backlash.” Ed Koch would become the unlikely face of that backlash.

Lindsay made two early moves to ignite the political reaction against him, supporting a Civilian Police Review Board as well as the Ocean Hill/Brownsville experiment in community control of schools. Buckley had campaigned against Lindsay’s concern about police misconduct, mocking the liberal notion that poverty and racism could “make Negro crime any less criminal.” With broad support from opinion makers like the New York Times, and Republicans including Sen. Jacob Javits and Gov. Nelson Rockefeller, Lindsay appointed the review board – and the Patrolmen’s Benevolent Association organized a ballot measure to repeal it. Against a backdrop of rising crime, the repeal passed thanks to an alliance of outer-borough Jews and “white ethnic” Catholics (my people): 83 percent of white Catholics backed the measure, but so did 55 percent of Jews. Liberal Manhattan was stunned.

Coming the next year, Lindsay’s Ocean Hill/Brownsville experiment pitted the largely Jewish teachers’ union against deeply frustrated black parents in one of Brooklyn’s poorest neighborhoods. It would crystallize the charges of “black anti-Semitism” that Koch would later use to explain away the black community’s entirely valid opposition to his agenda. The firing of 19 teachers, all Jewish, by the community control board triggered teachers’ strikes that would indeed surface community anti-Semitism. The city’s African-American teachers’ magazine complained, “The Jew, our liberal friend of yesterday ... is now our exploiter.” But on the union side, there were few efforts to defuse the conflict rather than escalate it. Ocean Hill/Brownsville pitted former allies – the once-excluded Jewish community vs. the currently excluded African-Americans – in a battle no one could win.

Lindsay would later say backing the experiment was his biggest regret as mayor. Ten years later, a new mayor would ride outer-borough reaction to Lindsay’s reforms into Gracie Mansion.

The 1977 mayor’s race was marked by a mid-July blackout, which came to symbolize the city’s decline. It was no longer the capital of innovation and integration, but a place ruined by liberalism and license. We even had a point of comparison – the November 1965 blackout, which came days after Lindsay’s election. The '65 blackout inspired cooperation and a quiet sense of responsibility, with neighbors helping neighbors and co-workers walking one another home and putting up stranded commuters, as the power outage paralyzed the regional railroad system. In the '77 riot, neighbors stole from neighbors; in fact, much of the disorder featured so-called “black on black” looting, with small businesses run by every race destroyed.

Running against left-wing Jewish feminist Bella Abzug and liberal Italian Catholic Mario Cuomo and four others, Koch rode reaction to the blackout to victory. He was the anti-Lindsay, decidedly not patrician, channeling the anger of the white ethnic middle classes, fed up with rioting and crime being excused by liberal do-gooders, most of whom lived far above the fray. That clash was captured brilliantly in Jonathan Mahler’s “Ladies and Gentlemen, the Bronx Is Burning,” which tells the story of “the battle for the soul of a city” through the lens of the 1977 World Series. Mahler relates a conversation Koch had with an old ally Stanley Geller, head of the Village Independent Democrats where Koch had once been a leader. Another ethnic culture clash, this time over building low-income housing in middle-class Forest Hills, was splitting the Jewish community. Geller told Koch the Jews of Forest Hills just had to accept it; they had to "pay their dues."

Koch erupted: "Stanley, you have this wonderful brownstone on 12thstreet. And you have this marvelous home in the Hamptons … On the day your kids were born, you registered them in private schools. And you're telling me that the Jews of Forest Hills have to pay their dues? I'm telling you that they're willing to pay their dues. They are not willing to pay yours." That was the message voters sent with Koch’s 1977 election.

As an adult I would come to see that Koch was right about the way most of our solutions to centuries of racism and poverty took resources away from struggling white people and left the lives and privilege of the white wealthy untouched. As a teenager living in New York during his first term, though, I saw him as the unlikely face of racial reaction, and I came to despise him. Even if he was right to articulate the grievances of working- and middle-class New Yorkers, he was so often wrong in the battles he waged. I remember his ugly effort to close Harlem’s Sydenham Hospital, the first hospital in New York to allow black doctors to practice and a treasured resource in a community with few resources. So many liberal course corrections of the late '70s through the '90s involved having the great political courage to stand up to … poor black people. Such valor! It was an early Sister Souljah moment, only with very real life consequences.

Yes, Sydenham was expensive to run, but Koch crusaded for its closure with a passion that suggested it was a symbol of his determination to get tough with the black community, not municipal overspending. Ironicallly, corrupt Tammany Mayor Jimmy Walker had opened Harlem Hospital to black doctors. Koch, who ousted Tammany boss Carmine di Sapio when he became Democratic district leader in 1963, faced down Harlem yet somehow tolerated the other hallmark of urban machines made notorious by Tammany: graft. His final term was engulfed in scandal in the Transportation Department and the Parking Violations Bureau, though Koch never faced personal accusations of wrongdoing in the mess. Running for a fourth term, he lost to the man who would become the city's first black mayor, David Dinkins.

The other way Koch symbolized the unraveling of New York’s great urban coalition was in his putting Israel at the top of his political priorities. The very year Ocean Hill/Brownville erupted, the Six Day War between Israel and Egypt worked the same fault line, with some liberal Jews deciding to put their political muscle behind the beleaguered (though victorious) state of Israel, while the antiwar and civil rights movements began to list the Palestinians as one more people crushed by Western imperialism. Koch made hawkishness on Israel a political litmus test. He soiled his legacy by backing Bush and Cheney over John Kerry in 2004; one of his last political acts was to endorse Republican Bob Turner over Orthodox Jewish Democrat David Weprin, to fill Anthony Weiner’s safe Democratic seat in Queens, in order to send a message to President Obama for his supposedly inadequate fealty to Israel. "I like President Obama ... I helped get him elected," Koch said at Turner's election night party. "But he threw Israel under the bus."

As John Lindsay would call Ocean Hill/Brownsville his biggest mistake as mayor, Koch would later say closing Sydenham Hospital was one of his biggest blunders. But his biggest regret when he left office, he said, was that "many people in the black community do not perceive that I was their friend."

Koch did good things for the city, most notably investing in low- and middle-class housing, revitalizing more than 200,000 units. (Of all the Koch elegies, I particularly liked Tom McGeveran’s and Jim Sleeper’s, for unflinching but sympathetic remembrances of his career.) But he only belatedly realized that heightening racial division in the name of succoring struggling white New Yorkers, and correcting the excesses of the Lindsay era, helped nobody. The Rev. Al Sharpton graciously told the Associated Press that although they disagreed on many things, Koch "was never a phony or a hypocrite ... He said what he meant. He meant what he said. He fought for what he believed." Koch can’t be blamed for the fault lines that divided New York before he became mayor, but his legacy will always be dimmed by how little he did to close them.