Bill O'Reilly speaks for the babies

When I took on the topic of abortion, the Fox blowhard went after me 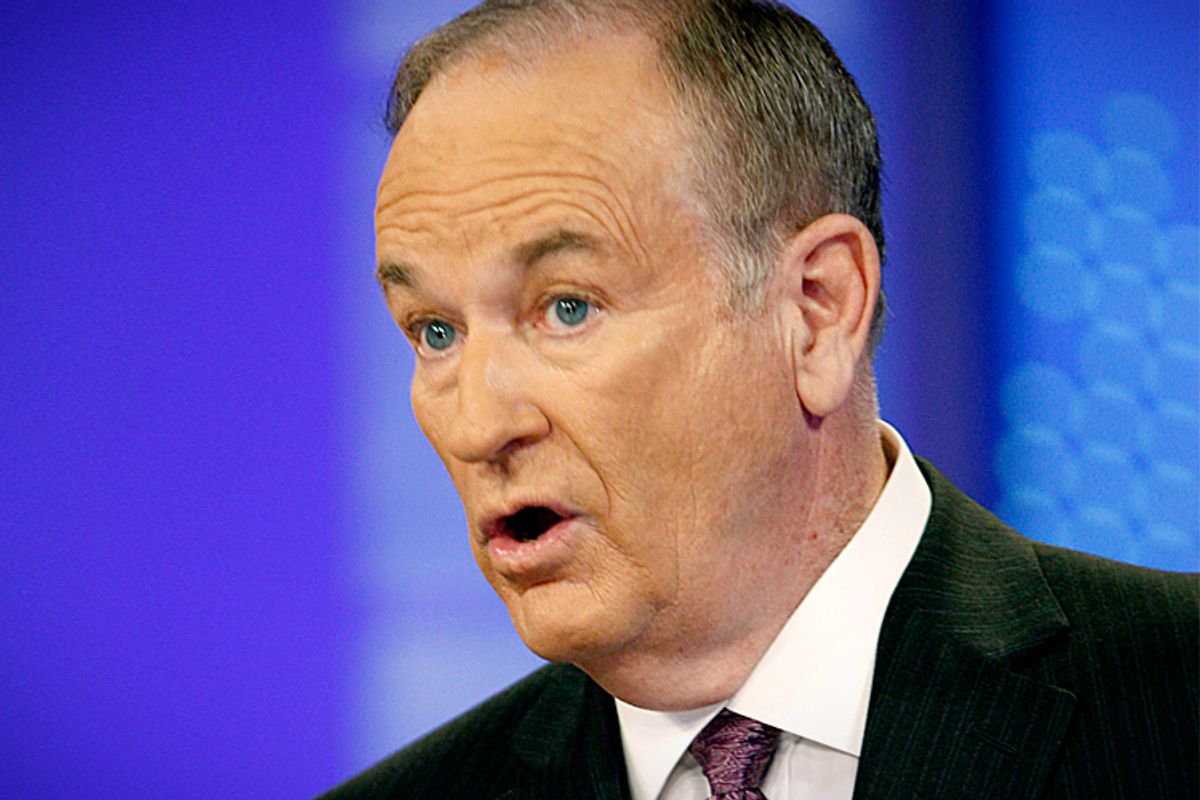 When I wrote last month of my conviction that life begins at conception — and my unshakable belief in the need for reproductive choice — I knew that I was risking attracting the attention of the trolls. And attract them I did, setting off a surge of blistering articles, emails and tweets, many to the effect that I’m worse than Hitler and that my mother should have aborted me. Thanks, "Christians!" I did, however, also get supportive messages from fellow pro-choicers, and exactly one email from a self-described “Imperfect Christ-follower” who invited a conversation on the “difficult, potentially contradictory ramifications” of abortion. What I hadn’t expected was that I’d land on the radar of loofah enthusiast and JFK-assassination-hogwash-dealer Papa Bear himself, Bill O’Reilly.

In a typically whipped-up, O’Reilly-spew blog post over the weekend, the Fox host offers a “Good grief!” on the subject of reproductive autonomy, and my opinions on it. He chillingly invokes the murder of George Tiller in his screed against me, yet again disavowing any role in “encouraging the assassination.” And he pouts, “What gives Williams the right to determine that her life is better than the baby she carries? Who appointed Williams the arbiter of who lives and who dies?” I had been wondering what the sudden uptick in disturbing hate mail had been about; a heads-up from a friend explained it. It had been the power of Bill.

What O’Reilly casually overlooked in his piece is that I mentioned in my original story that I’m in an experimental drug trial. When I began the trial — at a moment in my life I had stage-4 cancer that had spread to my distant organs, a cancer that usually kills within six months — I signed a contract stipulating I understood that if I became pregnant my doctors could no longer treat me. It’s simple math: If I accidentally found myself pregnant now, stopped treatment and my cancer returned, I likely wouldn’t live long enough to deliver a baby. It would be a “pro-life” choice that would end in two deaths, and my two children would be left without a mother. So you want to know who appointed me arbiter of decisions affecting my health and my body, of my life? I did. Oh, and the United States Supreme Court, in 1973. And frankly, Bill O’Reilly, when you rhapsodize over, and I quote directly, “a developing fetus or viable baby ingesting in the womb,” you don’t exactly inspire confidence as the most qualified individual on Earth to take over that job.

What the shrill, ostensibly life-loving advocates who see the world in the starkest black-and-white terms refuse to acknowledge is that safe, legal abortion saves women’s lives. They don’t consider the horrific consequences of restricting reproductive choice -- evidenced starkly last fall by the gruesome death of Savita Halappanavar and her baby in a Galway hospital that refused to intervene as she was miscarrying. We’ve seen it in the case of the 16-year-old Dominican girl with leukemia and her fetus, both of whom died last year when she was refused both chemo and an abortion. Even my own Catholic Church, while firmly against abortion, allows for the principle of the double effect, which states that lifesaving medical intervention that may result in the loss of a fetus is acceptable as long as abortion itself is not the direct action. So why, in the mad scramble for "life," are women’s lives too often given lower priority than those of fetuses?

Across the world, illegal abortion remains a leading cause of maternal death. The Alan Guttmacher Institute estimates that over 200 women a day die from illegal abortions. So if you want to get all pro-lifey, try remembering women’s lives somewhere in there too. If you want to say, as O’Reilly does, that “The measure of a decent human being is how he or she treats the defenseless,” think about a 16-year-old with cancer, or a young woman who spends two full days dying “in agony.”

But the issue of choice isn’t just about clear-cut life-or-death calls. For every American woman, it’s about our constitutionally protected reproductive autonomy. Abortion on demand means that the roughly half of all rape victims who don’t report their assaults — and the 5 percent of rape victims who will get pregnant from their attacks --  don’t have to answer to politicians who, unfamiliar with the workings of female biology, believe a woman can’t get pregnant from a “legitimate” rape, or tell her that pregnancy is a gift from God anyway.

Safe, legal abortion means women don’t have to risk the kind of poverty that would throw them -- and their families -- into economic free fall. It’s funny how the same mouthy blowhards who complain about welfare are so often the very ones who’d heartlessly condemn American families to abject poverty with additional children they can’t afford to care for. Sixty percent of women who have abortions are already mothers. Choice means that women aren’t forced to go off their antipsychotics, risking mental breaks potentially dangerous to themselves and others. Mostly, what it means is that no woman has to justify her private decisions to anybody, for any reason -- not to me, not to a judge, not to a committee, not to some willfully ignorant senator, not to Bill O’Reilly, and not, for that matter, to any 63-year-old white male millionaire with a mouth and a pair of feet for sticking in it.

Yet O’Reilly, in his defense of his stance, claims the magical talent of speaking for the babies. “If they could talk,” he explains, “they would tell Williams and other pro-choice zealots that their lives should not be marginalized by someone who thinks she's the boss. That's what the babies would say.” Interesting how men like O’Reilly would prefer to fancifully imagine what “the babies,” peacefully “ingesting” in the womb, would tell us rather than confront the realities of what sentient adult women are saying right now. Because unlike fetuses, we have access to facts.