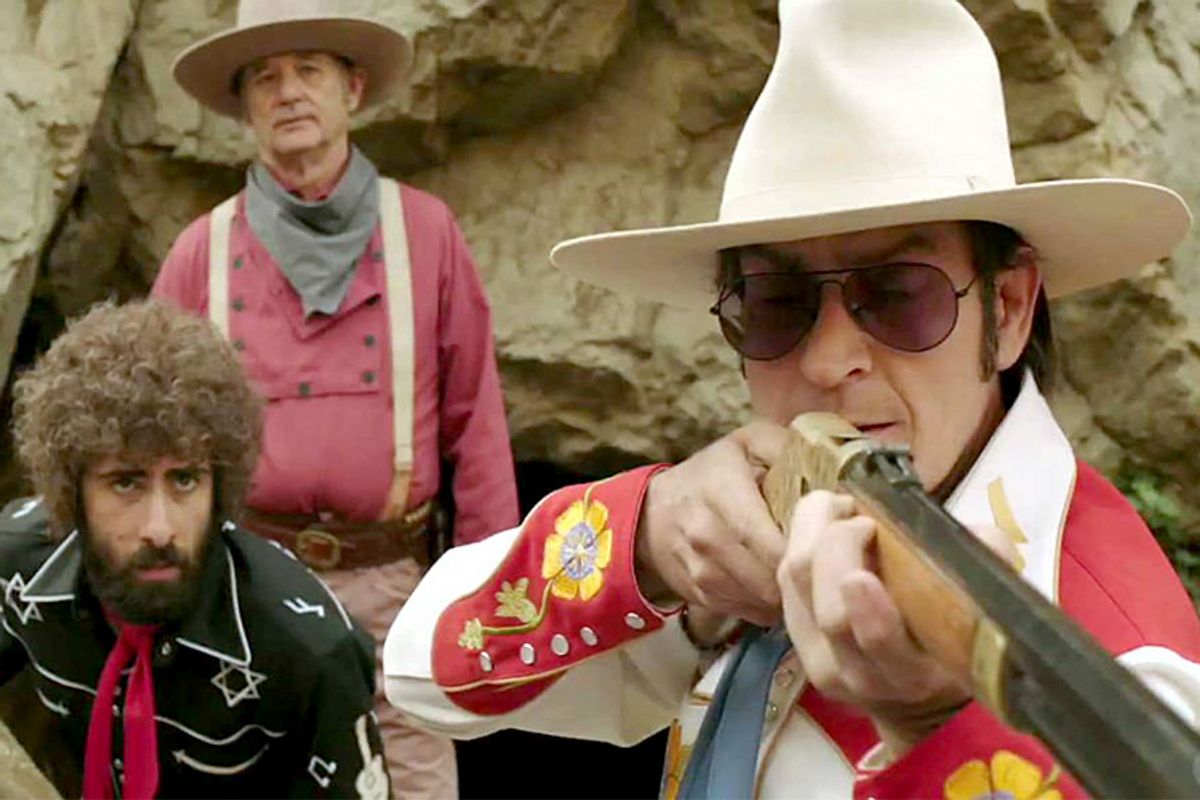 Don’t you have to go away – and have people, like, actually miss you – before you can stage a comeback? But the lack of any noticeable public desire to fall crazy in love with Charlie Sheen all over again is only one of the problems with “A Glimpse Inside the Mind of Charles Swan III,” which features sexy-vengeful Indian maidens, sexy-vengeful drone assassins in garter belts, a funeral for a toucan named Coco, and Charlie Sheen speaking Spanish with the maid. Seriously, this is one of the strangest and most painful films in recent memory. There’s no way I can make it sound coherent, and I can’t tell whether it’s supposed to be a Sheen-specific apologia pro vita sua or a grand artistic experiment by writer-director Roman Coppola (son of Francis and brother of Sofia). Some of both? I guess?

I had to force myself to watch “Charles Swan” all the way to the end, and it took almost the entire time for me to figure out that the big hair and high-waisted hip-huggers were not just goofy retro fashions, but were actually meant to indicate that the story takes place in the 1970s. Looking haggard in some scenes and puffy in others, Sheen now bears a startling resemblance to his less scandalous father. He really gets to stretch here, playing a charming but thoroughly irresponsible ladies’ man who seems deranged and unstable after being dumped by his latest youthful blond honey. Her name is Ivana (Katheryn Winnick) but she’s supposed to be an all-American girl from Kansas City, which might seem like a problem if her character bore any relationship to a real person.

There’s a strong flavor of imitation Wes Anderson about this movie, along with some bits of imitation David Lynch, and at least in the first instance that’s no coincidence. Coppola co-wrote the screenplays for Anderson’s “Moonrise Kingdom” and “The Darjeeling Limited,” and Sheen’s principal co-stars are Jason Schwartzman and Bill Murray, frequent Anderson collaborators going clear back to “Rushmore.” (Schwartzman is also a Coppola cousin.) Even more than that, there’s a strong flavor of inside joke the audience isn’t getting, along with mystifying sketch comedy out of the cocaine period of “Saturday Night Live,” or perhaps Hugh Hefner’s daydreams.

Whether you like Wes Anderson’s movies or not, he always constructs immensely detailed and internally consistent universes around his characters, and that’s exactly what Coppola doesn’t do here. I know only from reading other journalists’ interviews with Coppola that he apparently intended to capture the Pop Art-influenced Los Angeles design scene of the '60s and '70s. Sheen’s character is supposed to be a star graphic designer who does book covers for his sister (Patricia Arquette) and album covers for his hirsute buddy Kirby Star (Schwartzman), a music-and-comedy star who’s like a combo of Billy Joel and Lenny Bruce.

But “Charles Swan” has no governing tone or visual style, not to mention an approach to narrative that could generously be described as fragmentary. It lurches back and forth between supposedly realistic episodes from Swan’s sad-sack, post-heartbreak life and his Walter Mitty-like fantasies, which may be satirical and may also just be horny and misogynistic. In one, he levitates from the grave in a tux and fedora, to dance Astaire-style with all his pissed-off ex-girlfriends. In another, he and Kirby are pursued and attacked by the military strike force of the Secret Society of Ball-Busters, who favor Pleather butt-revealing costumes apparently rejected by Destiny’s Child for being too trampy. Generally speaking, the experience for the viewer falls somewhere between funny-peculiar – as if you arrived late to a party where everyone was playing a parlor game you didn’t understand – and slow-motion car-accident horror that will make you wish you were going to the dentist or placing that overdue phone call to your great-aunt.

To whatever extent this movie is meant as a rehabilitative move for Sheen, he pulls it off OK, coming off as more normal when acting than when playing himself in the real world, and halfway capable of making jokes at his own expense. (At one point Swan tries and fails to acquire coke, instead buying $800 worth of smuggled beluga caviar out of a Russian taxi driver’s trunk.) Schwartzman’s amped-up, Jewfro-wearing character is rather too much, but as ever Bill Murray adds a note of grace and depth in what amounts to a cameo role. In reading about the background to this soon-to-be-forgotten movie, I was reminded of the fact that Sheen’s father and Coppola’s father once made another tormented psychodrama together, lo these many years ago. That one turned out better.