When an Oregon bakery refused to make a same-sex couple's wedding cake, Internet reviewers excoriated them for it 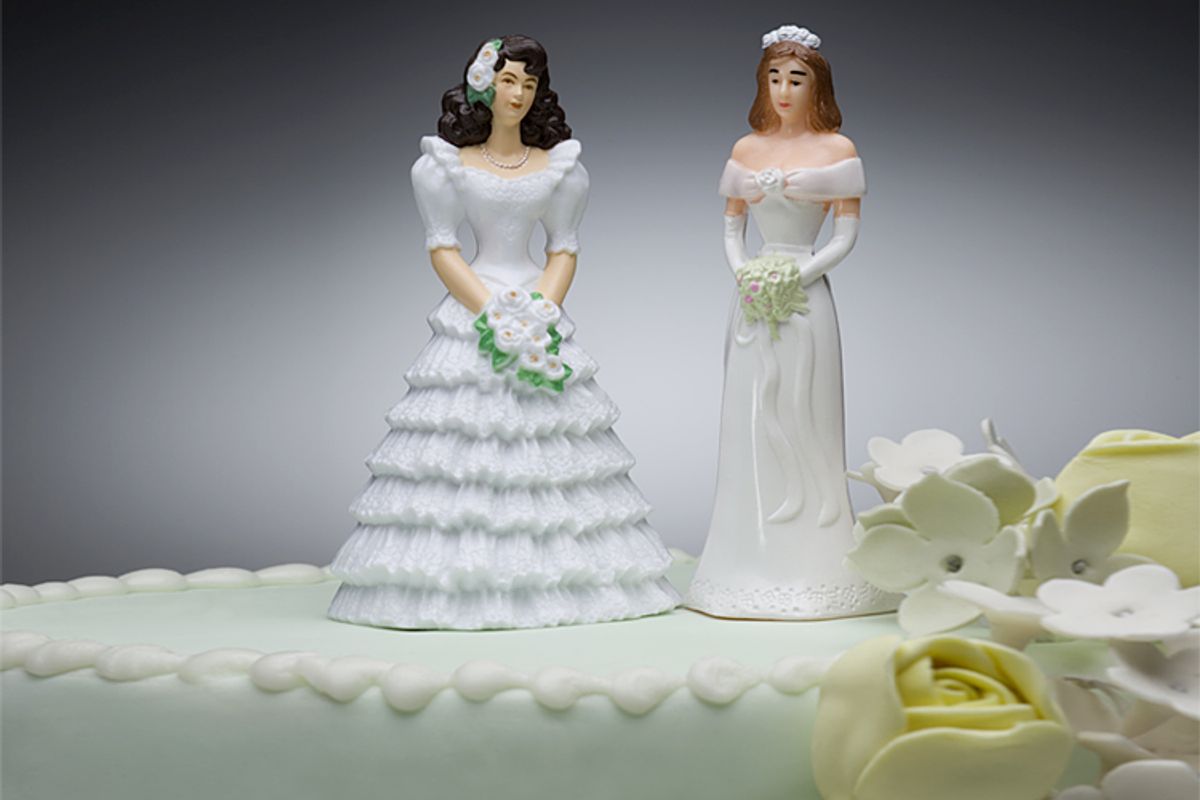 The ostensible right of an independent business operator is to choose the jobs he or she wants to take on. If you're, for instance, a baker and you don't want to make a cake for somebody, that's your decision, and the consequences of that choice are yours to accept. But just remember – Yelp is watching.

Sweet Cakes in Gresham, Ore., looks a lot like the kind of confectioner you'd want to do your wedding cake. On the bakery's website, you'll find an image of a set of wedding rings and the promise, "Are you looking for a wedding cake or for ANY occasion? Our cakes are custom made and designed to fit you." But when you scroll down the page, its claim of "ANY occasion" may strike many as disingenuous, for right above the smiling photo of owners Melissa and Aaron and their three children, they've posted a passage from John 3:16.

And so they were, for the conservative Christian bakers were approached last month by a lesbian couple looking for a wedding cake. And owner Aaron Klein refused to serve them. The brides-to-be say Klein told them flat-out they were "abominations to the Lord." The bakery is now under investigation for discrimination. Klein denies the incendiary remark but does say, "They're making a choice to do what they're doing; I'm making a choice to not be a part of it." He also admitted that he'd refused to make wedding cakes for same-sex couples several times in the past, but added, "They can buy my stuff. I'll sell them stuff ... I'll talk to them, it's fine." Last summer, a Colorado bakery gained national attention – and a boycott -- when it too refused to make a wedding cake for a same-sex couple.

Since the story went public, "Ace of Cakes" baker Duff Goldman has stepped in to offer to make the couple their wedding cake for free, saying, "I can do something, there's injustice involving a cake!" The Kleins, meanwhile, have been accused of posting – and hastily deleting -- a racist, sexist screed on Facebook. (It may not be real, but the inconsistent alphabetizing is similar to the couple's, whose site also tragically promises, "Its not just cake, its dessert!" [sic]) The Kleins told The Oregonian this week that all the attention has been a boon for their business, saying, "It's been hard to handle the demand." After all, if Chik-fil-A has taught us anything, it's that plenty of Americans really love Christian, gay-shunning eating establishments.

But when you choose not to do business with a sizable segment of the cake-eating population, the court of public opinion will get back to you. And that courtroom is composed of online reviewers. A gander at the recent Yelp entries for Sweet Cakes shows something far more chilling to a business owner than accusations of discrimination – it's single stars. Lots and lots of single stars. A reviewer complains about the bakery's "bigoted behavior," after excoriating it because "Your cakes are dry and tasteless. Nobody ever likes your cakes." A reviewer from Portland adds, "Stale, dry cupcakes. Also didn't appreciate the homophobia." And another Portland Yelper delivers this devastating blow, "All you need to do is take one look at the website to realize this place is not going to be friendly to anyone who is the slightest bit interested in design, aesthetics, or other stuff that homos like." BURN.

The Yelp reviews have become a public discourse on the bakery and whether it had the right to turn down the couple, but they've become something else too – a brutal takedown of an apparently already mediocre bakery. And while the reviews may not rise to Hutzler 571 Banana Slicer levels of genius, they reveal yet again the not-to-be-messed-with power of social media. Homophobia is a scourge. But homophobia and dry cupcakes is really unforgivable.