Saturday deliveries of regular mail are ending, and it feels like my fault. Ben Franklin would not be amused 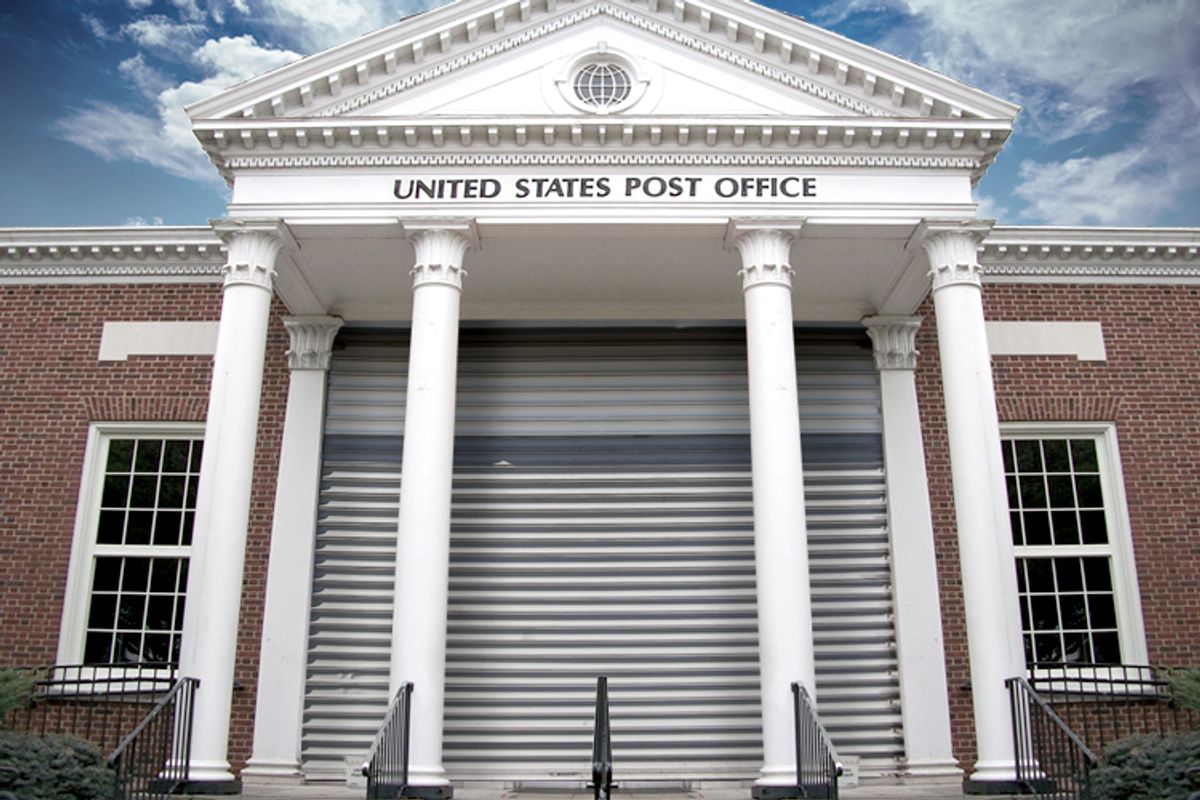 The news that the U.S. Postal Service is ending Saturday deliveries of regular mail brought to mind an old letter from my grandfather I discovered while packing up my mother's house in Florida over the Christmas break.

Datelined April 30, 1980, the letter was intended to console me for not getting into my college of first choice. It is a remarkable document. In two single-spaced pages, my grandfather offered up a meditation on Ecclesiastes -- "time and chance happeneth to them all" -- a review of his own career, and a closing coda name-checking McGeorge Bundy, a contemporary of my grandfather's who had succeeded wildly at every level before becoming (justly) saddled with a significant part of the blame for the Vietnam War. Hey, your life could be worse, he was saying, you could be McGeorge Bundy!

I can't remember whether the letter succeeded in consoling me. I'm guessing probably not, and in fact, I'm pretty sure  I never looked at it again. My bad. But while I'm always glad to be reminded of my grandfather, I found that holding that letter in my hands provoked a powerful sense of guilt.

Will my children, or grandchildren yet unborn, one day hold in their hands a similar document, a hard-copy distillation of hard-won wisdom? The prospect seems less likely by the minute. I was once a letter-writing machine, but since the day I first got hooked on the Internet in the mid-'90s, I've probably written less than a dozen non-digital letters. The texts that I exchange today with my daughter on a daily basis do not seem destined for the permanent record, nor should they be. Thirty-two years from now, I find it difficult to imagine that my grandson will be marveling over that Facebook message I sent him that day he broke up with his first girlfriend.

On days like today, I feel like I killed the post office. I embraced the Net early and I evangelized it ruthlessly. I stopped writing letters. I started paying bills online. Heck, I even switched my Netflix subscription from DVDs to streaming. I'm a one-man post office wrecking machine. If you want to know why the volume of mail delivered by the postal service is plummeting every year, well, look no further. It's my fault.

My despondence stretches beyond the dollar and cents implications for the post office. When I hold in my hands these irreplaceable archival items from my personal past, I also feel guilty of cultural homicide. I would not trade my smartphone-enabled life for what came before, but I feel compelled to honesty: Digital life is distracting. It's so much easier to fire off an email or a text than it is to pull out a pad and paper -- or hell, just hit the print button. Most of the time, I don't worry about such things while checking Twitter in the toilet. But when I am reminded of how much I value thoughtful artifacts from the past, I feel suffocated by today's Internet-enabled superficiality.

Of course, the story of what's going on with the U.S. Postal Service is far more complicated than the simple tale told by the sharp decline in my stamp-buying budget. Anyone who cares about this issue should stop whatever they are doing (including reading this post) and go devour Jesse Lichtenstein's extraordinarily well-written -- and incredibly timely -- Esquire feature on this topic, "Do We Really Want to Live Without the Post Office?" You won't find a more lucid explanation of the cultural value provided by the U.S. Postal Service, nor a more compelling explanation of how Congress has fatally crippled any chance the USPS has had of appropriately modernizing itself for the digital era.

Throw in Republican antipathy to government in any shape and form, and you end up with a much more fraught narrative than the simple tale of a nation seduced by online banking. Our post office is a mess because our politics are a mess. As a society, we no longer know what we really want; we're afraid to aspire to grander visions of what our society should provide. Benjamin Franklin saw the post office as a necessary crucial element for the establishment of a new nation. Lichtenstein quotes an assistant inspector general today arguing that "The point of the post office was never paper, or even simply mail ... It was binding the nation together -- connecting people." It's possible that the real tragedy afflicting the current incarnation of our nation is that it is so fractured by partisan disagreement that even consensus on so basic a point as how to best connect ourselves together seems impossible.

So maybe instead of feeling guilty, I should be feeling angry, raging against partisan gridlock and House Republican dysfunction. The thought is attractive -- it's always nice to be distracted from one's own complicity. But as I was contemplating, once again, my grandfather's letter, I noticed that underneath his signature he had included a typewritten code: His initials: RSM, followed by a colon and the letters "trs80."

Silly me. I realized that my grandfather had written this letter on one of the earliest personal computers, Radio Shack's TRS-80. My grandfather was an early adopter right up there with the best of them, fascinated by the implications of the democratization of computing power until his dying day, even if he never ended up sending an email to anyone. The letter that I was fetishizing as some pre-digital artifact was actually right at the cutting edge of the computing revolution. My grandfather was literally the first person I ever knew who used a computer to write a personal letter.

New technology, but old wisdom, some of the most eloquent despondency we have on record: "the race is not to the swift, nor the battle to the strong, neither yet bread to the wise, nor riches to men of understanding, nor yet favor to men of skill ..."

I feel sure, if my grandfather was alive today, he'd be looking at our postal mess and thinking, there's got to be a better solution, a way that preserves this amazing enterprise that links all Americans together without totally surrendering to the cost-efficiencies of "a free market" protected by bought-and-paid-for politicians. He wouldn't be afraid of using new technology, or feeling guilty about what we've lost by embracing new ways of doing things. He'd be seeking to apply our old hard-won wisdom to new realities.

What are those solutions? It's not clear. Lichtenstein suggests a few: giving the post office an expanded role in delivering pharmaceuticals by mail, leveraging its unparalleled ability to get products delivered down "the last mile" to your house as quickly as possible, and perhaps the creation of "authenticated, government-issued e-mail accounts, linked to our physical addresses, that people would keep for life." The real challenge, emphasizes Lichtenstein, is not to give up, not to simply accept that the postal service is a victim of changing times, fatally wounded by people like me, who traded in their stamps for a free Gmail account.

Instead of feeling guilt at the sight of my grandfather's letter, I will choose to be inspired by it -- because the medium is obviously not the message here. The medium can be anything, from a piece of papyrus to a TRS-80 to my smartphone. The message is what's important. And the message we should be spreading as we mull the news that the postal service is stopping Saturday deliveries is that the postal service is important. Making sure that we're all connected, that no one gets cut off because a private company can't figure out how to make a profit on the deal, is important. It's civilized. Where's Ben Franklin, when we need him?

UPDATE: Bloomberg columnist Josh Barro, who believes that we should deregulate the post office and sell it, tweets that this piece repeats the "canard" that  "USPS has to prepay 75 years of benefits." His explanation can be found here. I don't agree with his conclusion, but his analysis of the accounting issues involved is useful.