Democrats will be criticized, but they're right to cave on the ban. It's cosmetic, and what matters are magazines 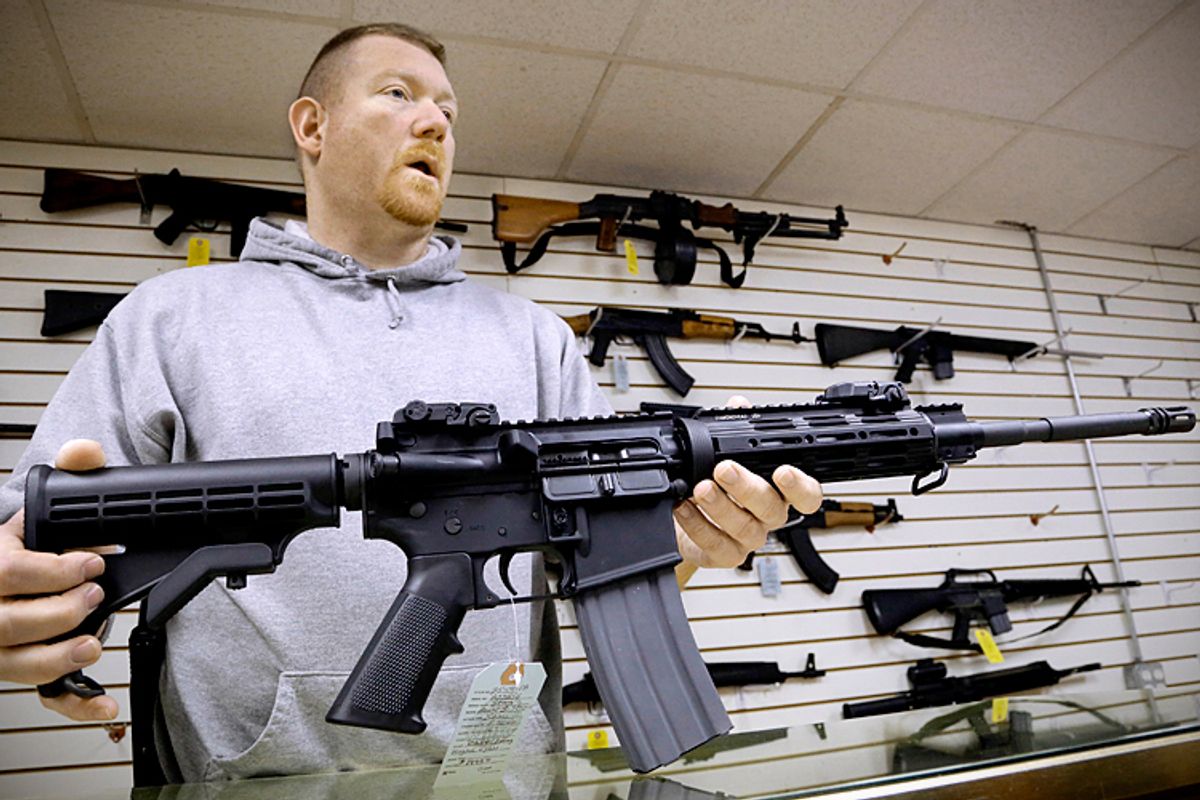 If -- and it’s still a big if -- Congress passes any kind of meaningful new gun legislation, it’s looking increasingly like a reinstatement of the Assault Weapons Ban will not be a part of it. The new ban, introduced by California Democratic Sen. Dianne Feinstein, will likely make it through the Senate Judiciary Committee’s legislation writing process, only to die on the Senate floor when it fails to secure enough votes as a stand-alone measure, according to multiple reports.

This will inevitably be portrayed as a huge loss for gun control advocates, and another big cave from congressional Democrats and the White House. Of all the gun control measures kicking around Capitol Hill right now, the ban has received by far the most attention, and it’s also one of the only proposals to have previously been the law of the land.

But the Assault Weapons Ban is and always has been a bit of a red herring, so people concerned about gun violence shouldn’t be too sad to see it go. Of all the policy proposals to prevent gun violence, it’s probably the least important and the most controversial, making it the ideal sacrificial sacred cow to appease gun rights advocates and to help secure passage of more effective strategies to curbing gun deaths, like a ban on large capacity ammunition magazines.

Shedding the ban makes it possible to do effective gun control without even touching guns.

Why aren’t assault weapons that important? Mostly because they’re used so rarely -- as few as 2 percent of all gun crimes, according to the official study mandated by Congress when it passed the 1994 version of the ban. So any legislation on assault weapons can only ever hope to impact a tiny fraction of all gun deaths.

This is a rare case where the NRA is right. It says the ban created an artificial distinction between “assault weapons” and other semi-automatic weapons, based almost entirely on cosmetic features. This is largely true. “The gun ban provision targets a relatively small number of weapons based on outward features or accessories that have little to do with the weapons’ operation,” University of Pennsylvania criminologist Chris Koper and his colleagues wrote in their official review of the 1994 assault weapons ban. “In other respects (e.g., type of firing mechanism, ammunition fired, and the ability to accept a detachable magazine), AWs do not differ from other legal semiautomatic weapons.”

Manufacturers openly made a mockery of the 1994 ban by creating new models that were identical to banned ones, save the removal of a single feature. The ban differentiated between, as pro-gun advocates often said, “The same gun in different clothing.” When the law expired in 2004, the Violence Policy Center put out a report estimating that “there are more assault weapon manufacturers and assault weapons available for sale in America than ever before.” For instance, the 2002 Washington, D.C.-area sniper used an AR-15 variant that he legally purchased -- it was marketed as a “Post-Ban Carbine.”

Feinstein's new bill is a vast improvement over the 1994 version, and closes most of these loopholes, but it still can’t solve the “same gun, different clothing” problem, since the issue is endemic to any attempt to define assault rifles as distinct from other semi-automatic rifles.

What does matter is how many bullets a gun can fire downrange in a limited amount of time. This is theoretically the substantive distinction between, say, a semi-automatic AR-15 assault rifle and a semi-automatic World War II-era rifle. But what determines the number of rounds either can put out is not the gun, but the type of magazine it holds. What makes the AR-15 unique is that it can accept magazines that hold 30 rounds (the factory-issued standard) or even up to 100 rounds. “An LCM [large capacity magazine] is arguably the most functionally important feature of most AWs,” Koper and his colleagues wrote in their study.

But, if you limit the size of the magazine to 10 bullets, as the ban on large-capacity magazines does, it’s basically irrelevant whether the magazine is attached to a modern AR-15 or a 75-year-old wooden M1 carbine that Allied troops carried across the beaches at Normandy.

This is why the ban on large-capacity magazines is vastly more important than the ban on assault weapons. The magazine ban, which was part of the 1994 Assault Weapon Ban and is now being proposed as a separate measure in the Judiciary Committee, can effectively do everything the Assault Weapons Ban can do by removing the key threat from an assault weapon. But it does a whole lot more on top of that.

“The LCM ban’s reach is broader than that of the AW ban because many non-banned semiautomatics accept LCMs,” Koper and his colleagues wrote. The authors estimated there were about 1 million privately owned assault weapons in the U.S. before the 1994 ban, but up to 25 million guns fitted with large-capacity magazines. And while assault weapons were used in only between 2 and 8 percent of gun crimes, large-capacity magazines were used between 14 and 25 percent of the time.

These numbers are rough estimates  (it’s almost impossible to get reliable figures), but there's no question that a magazine ban has the potential to affect many times more guns and gun crimes -- up to 25 times more, by Koper’s numbers -- than a ban on assault weapons alone. And it does all this while not even touching the assault weapons that gun rights advocates hold so dearly.

This is not to say that the assault weapons ban is meaningless or undesirable. To the contrary, in an ideal world it would be a part of any comprehensive response to gun violence, mainly because assault weapons seem to be so popular among mass shooters. While the weapons are used in only a tiny fraction of all homicides, they were used in over a quarter of recent mass shootings, according to a new study from Mayors Against Illegal Guns. But mass shootings, while horrific and high-profile, are responsible for less than 1 percent of all gun murder deaths, according to the same study.

If something needs to be cast overboard of the four main gun violence proposals that President Obama and congressional Democrats have endorsed -- the assault weapons ban, the large-capacity magazine ban, mandatory  universal background check for  all firearm sales (closing the “gun show loophole”) and a federal crackdown on gun trafficking and straw purchasers -- it's clear that the assault weapons ban should be it, as it is simultaneously the most politically costly and the least important.

Universal background checks are critical to bringing the 40 percent of all gun sales made through private transactions into the light, while a federal trafficking law would help dry up the supply of guns to criminals. And both enjoy bipartisan support. Even staunch conservatives like Eric Cantor and Paul Ryan have endorsed universal background checks.

The large-capacity magazine ban will be harder to pass, but less difficult than the assault weapons ban, and ditching the latter could help give conservative Democrats the political cover they need to approve the former.

Ditching the assault weapons ban also gives Obama and Democrats a powerful talking point and saps one from the NRA: Nothing on the table will touch a single gun. Gun owners will be able to keep every gun they now own, and buy any gun they can get now.