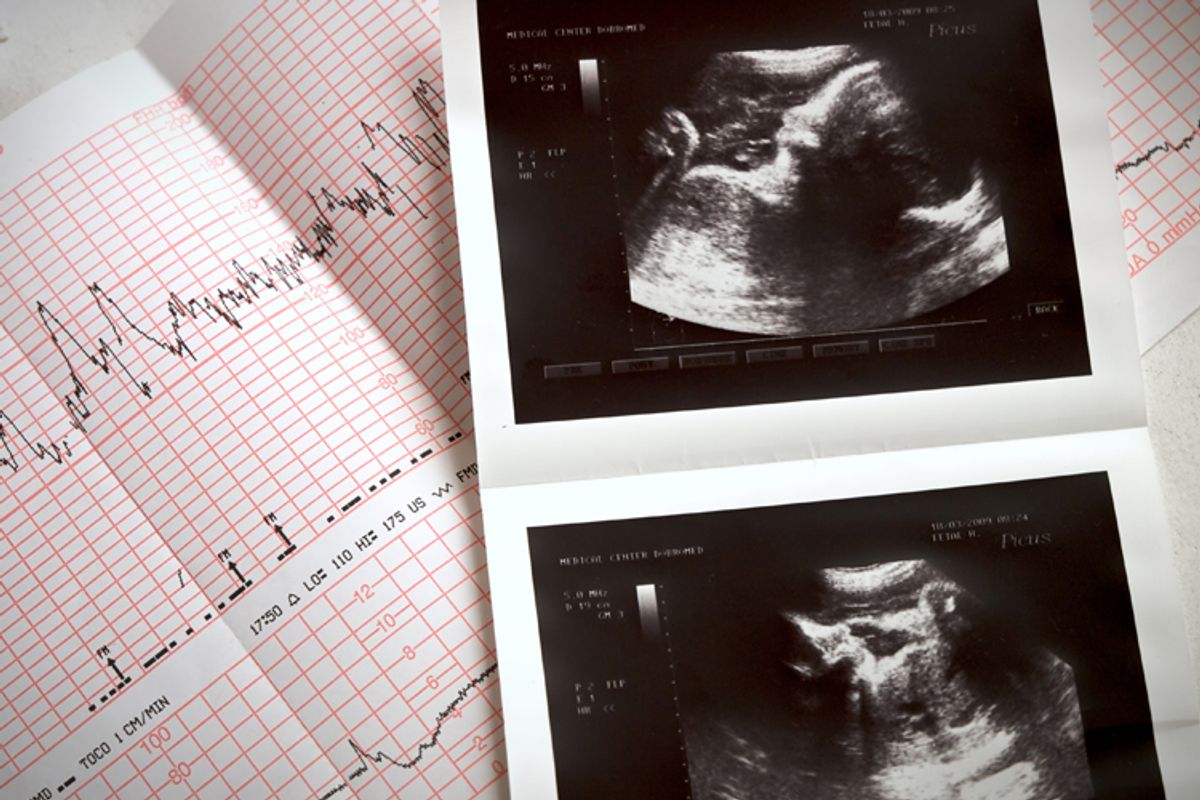 I started seeing a therapist again after my abortion. She tells me it’s OK to talk about this, but I know I’m not supposed to. Sometimes my 3-year-old asks why he has a baby brother instead of a baby sister. I imagine he will have stopped asking by the time I am ready to answer him.  My husband tears up, too, when we talk late at night about what our daughter would have been like. The conversation always ends the same: We couldn’t have changed the outcome. She would have been born dying. We have been lucky to have another baby since then. He just started saying mama and we cannot imagine life without him. We know we made the right decision, even if it hurt to do so.

On the 40th anniversary of Roe v. Wade, I heard an interview on “Fresh Air” that stopped me in the middle of my workday. Terry Gross was interviewing Carolyn Jones, a woman in Texas who had an abortion for reasons that sounded familiar.  She wanted her baby, just like I had wanted mine. Unlike me, though, she was forced to have an ultrasound and wait 24 hours because the lawmakers in her state had recently decided she should. She talked about how the doctor apologized for having to do it, how the nurse spoke louder and tried to distract her while the doctor verbally documented the ultrasound. She explained how the law required that the volume be up loud enough for her to hear the heartbeat.

As I listened to her, I felt so grateful that my abortion took place in Massachusetts. I could not imagine going through that. My ordeal was bad enough. And I realized I needed to talk about my abortion outside of my therapist’s office, because it might help another women in this position. Will it help if I add my story to the chorus saying: We cannot let women be treated this way -- these mandates are not OK?

As soon as I realized I was pregnant, I knew something was wrong. At my first prenatal visit at eight weeks, I told the midwife that some days I had cramps that felt like contractions and some days I didn’t feel pregnant at all. They did an ultrasound, which was fine. I was approaching 35, so the midwife also recommended the quad screening for chromosomal abnormalities.

I had a knot in my stomach as we waited three weeks until we could have the testing. The appointment was in the department of fetal medicine on the sixth floor of the hospital where we planned to have the baby. The room smelled cold. I knew the technician saw that something was wrong, because her eyes never met mine. We waited an eternity for the doctor, as I repeated to my husband that we must have done something terrible to cause whatever terrible was going to happen. Tears began to stream sideways down my cheeks, landing with a ping on the shiny white paper they have in doctors’ offices.  My husband held my left hand with both of his. There were holes in the shiny white paper where my tears had landed and dried and landed again.

That day was long and difficult: The doctor recommended diagnostic testing, which we had after a long talk with the genetic counselor. She asked if I had a therapist. The knot in my stomach became a prayer for Down syndrome. And finally, a few days later, the call with news you don’t want to hear. Our baby had Trisomy 18.  Every cell had an extra copy of the material on chromosome 18. It was rare, we were told, because most of the time, the pregnancy wouldn’t have made it this far.

We asked countless questions. We emptied many boxes of tissues. Half of these pregnancies will result in stillbirth. Half of the live births do not survive beyond the first week. Less than 10 percent will have a first birthday. A small number have lived into their 20s and 30s with medical and developmental issues that prevent them from living independently.

I was always pro-choice, but I had never planned to have an abortion. I could not believe what was happening, but I talk to my toddler about making choices. When he doesn’t want to hold my hand in the parking lot, I tell him that sometimes we have to make the choice we don’t want to make because it is the right choice or because it is the safe choice. I knew that to mother this baby, I had to let go. I could not bring myself to ask if it was a girl or boy until after we had made our decision. I had always hoped for a daughter. I had already imagined her first day of kindergarten.

The genetic counselor helped me make the appointment because I couldn’t do it myself.  I knew that the protesters would be there because I had once worked for that hospital. It took over a week to get the appointment and I had known for a week before that. I don’t know if I’ll ever tell my sons about how sad those weeks were. I don’t think I stopped crying at all for the last 24 hours. When my toddler wasn’t around, I let out deep, wet moans, throwing my grief at the walls around me.

When the day finally came, it was raining outside. I don’t remember how it smelled in that room. I felt so cold inside when it was over. If anyone had made me listen to a heartbeat, I don’t know how I would have coped. It seems like such unnecessary cruelty.

Also on “Fresh Air” last week, Terry Gross spoke to a woman named Carolyn Cline, the executive director and CEO of Involved for Life. Her organization and others like it are behind a growing number of pregnancy centers, which are not medical facilities but advise women who have unplanned pregnancies.  They don’t promote birth control but will support a woman through this decision. I don’t know how these centers plan to support a 15-year-old and her baby after birth, and I don’t know how they would support a toddler with a dying sister.

Ms. Cline spoke of something called post-abortion stress and said that the pregnancy centers advise women of the potential psychological impact of choosing abortion. I think Ms. Cline wants to help, but I wish I could talk to her, woman to woman, and tell her that what she thinks is helpful is not. Telling a woman that an abortion might hurt her because she might have regret seems foolish. Talking to a woman about adoption but not abortion doesn’t seem like pregnancy counseling. Subjecting a woman to a sonogram and a waiting period seems like something that will only prolong the sadness and suffering of this decision at a time when it is most impossible to bear.

After my abortion, I felt alone. I still do. In our society, we have methods to deal with bloody noses, acne and hiccups.  It strikes me that when we talk about “post-abortion stress,” we are talking about a woman left alone to cope with grief. I wish we weren’t still fighting for the right for women to make responsible choices about their lives and their bodies; I wish support existed for a woman after an abortion as opposed to instead of an abortion. And I wish we could move forward to a time where we could talk about this in language other than termination and procedure. For me, the word was "loss."

I never heard the heartbeat of that baby. I don’t know that anything could have made letting go any more painful. I usually write poetry when I feel alone. I try to find ways to honor that baby’s presence in our lives and I’m writing this story because I wouldn’t want her to feel so alone.

I’ve heard that the DNA of our children lives on in our bodies for 21 years. I don’t know if that’s true. But I think of her every day.

Jacqui Morton is a writer and full-spectrum doula in Massachusetts. Her work can be found on the internet, and she can be found, by friendly people, on Twitter.