My two-day "House of Cards" bender

Netflix's new series seizes upon our desire to watch a whole season at once. Does it have to be good to draw us in? 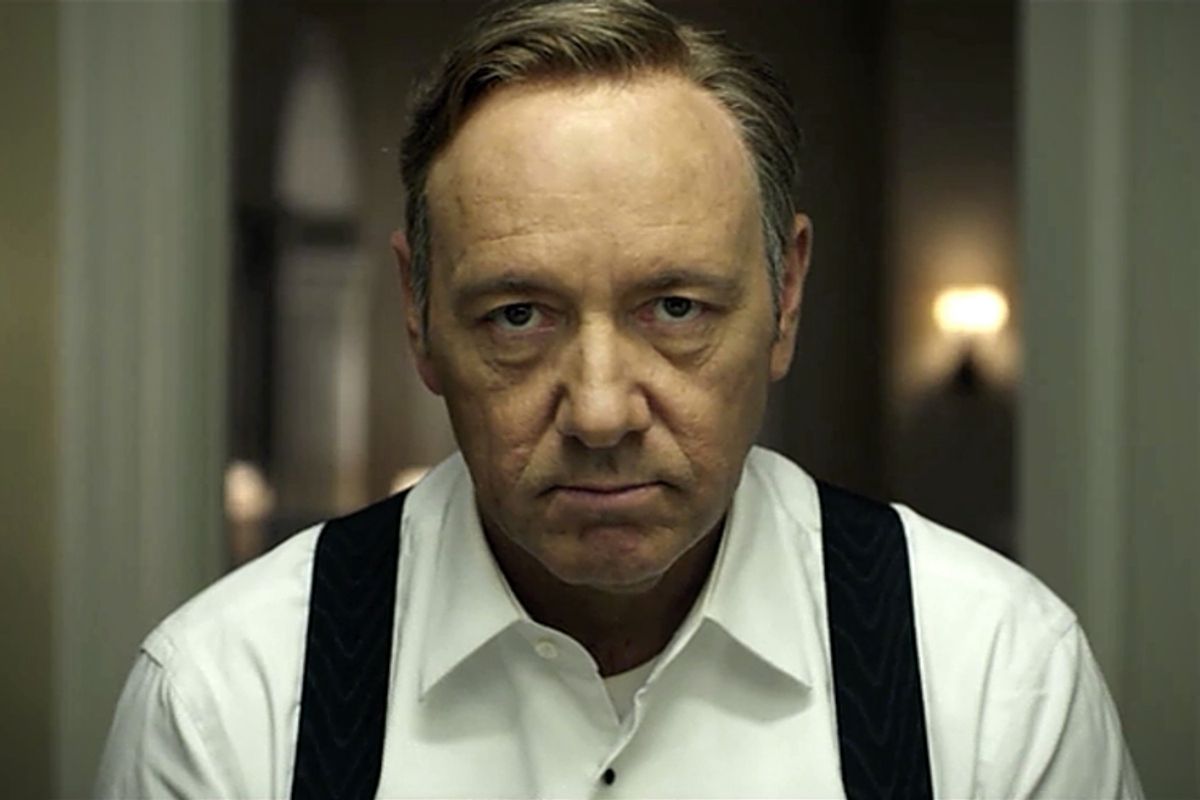 Kevin Spacey in "House of Cards"
--

All 13 episodes of “House of Cards,” the ravishing, pretentious, delectable David Fincher-directed political drama, arrived on Netflix on Friday, enough TV to last you three months, or three days, whichever you prefer. In some not so far-flung future, a future that many TV watchers already inhabit some of the time, devouring series in gargantuan doses will be as unremarkable as watching a film on VHS once was. But for now, “House of Cards’” release as an all-you-can-watch proposition makes it more than just a TV show: It makes it an experiment. Spending a day or two on the couch watching it is an act of research, not just that of a total slob. Having consumed the entirety of the series in two big “research” sessions — jags of nine and then four hours —  I can say that “House of Cards” is entertaining enough to reward this sort of intensive viewing, but more relevantly that this sort of intensive viewing would reward most shows. You can’t tell there's grit in your food if you don’t take the time to chew.

“House of Cards,” based on the British series of the same name, focuses on the venal Francis Underwood (Kevin Spacey), an 11-term congressman from South Carolina, the House majority whip, a grandiose man wholly dedicated to the pursuit of power. Underwood is nominally a Democrat, but as he says over and over, he has no ideology. Like the British-influenced “Veep,” “House of Cards” insists that Washington is populated by power-mad men looking out for their own interests, not power-mad zealots, the kind of believers who have made Congress such an intractable mess. If Washington were actually inhabited by career politicians as selfishly practical as Underwood, it would be running much more smoothly.

We meet Frank putting a wounded dog down with his bare hands: He turns to the camera and begins to speak, breaking the fourth wall like some debonair Zack Morris. It’s an off-putting quirk, but a meaningful one: Frank is a master manipulator and these asides are a manipulation of the audience. As Frank lectures, in the first case on how he has “no patience for useless pain,” it becomes clear his remarks are not the truth, not some unfiltered look at his mind, so much as propaganda, the slightly uncensored version of the type of salacious yet flattering memoir we all wish we could read if there were no libel laws. Frank relentlessly calls attention to the key moments and pivot points of his plot — “Here is where I must gamble everything, or it all fails,” he’ll say — not because he’s sharing, but because he wants to ensure that the daringness of his ploy, the impressive nature of his success is not be lost on anyone. Frank wants to control everyone and everything, he forgets nothing and no one, and that includes you.

The first episode sees Underwood taken by surprise: The new president will not, as promised, make him secretary of state, a slight that offends Underwood so deeply he hatches a plot, the intricacies of which we are unaware of for much of the 13 episodes, to get his power back tenfold. In his conspiracies, Frank is aided by his wife, Claire (Robin Wright), a kind of Lady Macbeth descendant, an ice queen who is Frank’s true soul mate, a helpmate with whom he can scheme and scheme. She is, in her way, as ruthless as Frank: She insists 16 of her employees be fired and then fires the 50-year-old woman who fired them, because she wants her nonprofit to begin digging water wells in trendy Africa. She is a woman whose slashing beauty — if you could actually cut yourself on someone’s face, it would be Wright’s — has engendered in her a powerful need to be more than just seen. Her devotion to Frank springs from his recognition and admiration that she is more than just a beautiful face, but also an unscrupulous operator.

Into this duo, and with full knowledge of both parties, comes a third power-mad creature, Zoe Barnes (Kate Mara, making a much bigger badass impression than her little sister Rooney did in “The Girl With the Dragon Tattoo”). Zoe is the latest example of an archetype currently giving Lady Macbeth a run for her money: the amoral, traffic-loving, fame-desiring blogger, the kind of trashy journalist “The Wire” spent an entire season decrying and that Carla Gugino just had to put down on “Political Animals.” Zoe is so unencumbered by anxiety and fear and so flush with ambition that the least plausible thing about her — and she is not at all plausible — is that she would have pursued a career in print journalism. But Frank recognizes a kindred spirit and a convenient tool in her anyway. Surely the V-neck tee and push-up bra she wears to meet him help. He avails himself of her talent, spoon-feeding her news items that help his machinations and make her career, and also of her body.

Zoe and Frank’s dynamic is suitably kinky-rank: Their initial foreplay, as Frank walks through Zoe’s shithole of an apartment, goes, “Do you have a man who cares for you? An older man? But you’ve been with older men before. And you know older men hurt you. After they hurt you they discard you. Take your heels off.” Zoe does. Later, Frank goes down on her while she talks to her father on the phone, lest ye think the daddy dynamics would be left subtextual. (Credit where credit is due: There is one shot late in the series where Spacey stares down at the tiny Mara, his double chin in stark silhouette, that is merciless about male aging.)

Right before the aforementioned daddy shenanigans, Frank tells us “a wise man once said everything is about sex, except sex, which is about power.” It is perhaps for this reason that Frank and Claire don’t appear to copulate. If sex is all about power, they are such total allies they have no space for it — their dynamic is too necessary to become a tug of war. (It is also revealed that Frank is at the very least bisexual; the gay relationship he had in college seems to be the only one not characterized by power plays.)  Sex does complicate things with Zoe, who is as conscienceless and bright as Frank, just less experienced. He insists he can control her, but then when she ends things, he gets jealous. They pick up their relationship on bitter terms: “As long as we’re clear about what this is, I can play the whore,” she tells him. “Now pay me.” They end things again, only to have her begin to unravel his grand conspiracy.

And it is grand. As the plot unfurls, Frank, like any antihero, begins to step further and further over the line. What looks at first just like flexing — so, he wants to get that particular secretary of state out or bust the union to get this education bill passed — slowly amounts to a much more unethical, downright murderous quest for power, one that involves a prostitute, the vice-president, a billionaire industrialist and, most endearing of all, alcoholic junior congressman Peter Russo  (the great Corey Stoll).

The pacing of all of this is off: The first episodes take their sweet time, leaving the last two to be a mad dash of ultra-rapid conspiracy unraveling (and Zoe’s insensible coupling with a very nice guy). Before the final sprint, there are some multi-episode beats that would likely be hard to sustain in a show airing every week — but those beats are often ponderous. In one pretentious subplot, Claire gives $20 to a homeless man. The next day he throws it back to her, folded up like an origami crane. In the next episode, she is learning how to make cranes via YouTube. In the next she trades origami with Peter Russo’s kids. Finally, she leaves a giant crane on the floor of a lover’s house as she goes back to Frank. Is Claire like an intricately folded paper? Beautiful but oh, so complex?

Sometimes “House of Cards'” pretentiousness works: When Zoe and Frank first agree to collaborate, they meet at the National Gallery in front of a painting of two rowers in a scull. Frank tells Zoe she better not rock the boat: He can only save one of them from drowning. Many episodes later, when Frank is expecting an apology and Zoe is hoping to end the sexual aspect of their relationship, they meet in front of Mary Cassatt’s “Little Girl in a Blue Armchair.”  The painting is of young child, her dress kicked up to reveal her petticoat, her elbow cocked behind her head in a provocative pose. If Britney Spears were a different kind of artist, she would have used it as an album cover once. Zoe Barnes, anyway, knows it’s exactly the right image to sit in front of, not only because she identifies with the subject, but because forcing Frank to look at it makes him the old, creepy lech one more time.

There’s head-scratching nonsense scattered throughout "House of Cards," the sort of minor errors that aren’t that big of a deal but undermine the notion that the show is serious about how D.C. works. A nationwide teachers' strike is led by the lobbyist for the teachers' unions; a handful of Democrats scheme to oust the speaker in conjunction with the Republicans, even though this would be a political non-starter and so on. But, honestly, by the time I was at Episode 11, what had happened in Episode 5, lo those seven hours ago, felt like a dream I vaguely remembered. At one point, I accidentally skipped an episode, and watched two ahead before realizing it: If nothing relevant happened in an entire episode, shouldn’t that matter? Who knows? I plunged ahead. Every time I would get worked up about something there was something else to see. That’s no one’s fault but mine, but I would have been much more irritated by "House of Cards" if I were watching it only on Sunday nights. (Or, to put it another way, I would have been a lot less incensed by one episode of "Homeland" if I had four to watch right afterward.)

“House of Cards” should begin the necessary correction about what binge-watching signifies. It needs to be defined down. As it stands, binge-watching is understood as a kind of compliment. The series people guzzle are the ones that they actively seek out, the shows others have insisted they “have to watch,” the shows around which enough chatter has coalesced to compel a person into a binge. But just because binge-watchers have, thus far, largely self-selected the good stuff doesn’t mean we'll only chug quality programming. Watching 13 hours of “House of Cards” in two days may be like hoovering 13 hours of “Breaking Bad” in one stretch, but it’s also a lot like zonking out on the couch for those nine episodes of “Hoarders,” or even doing that crazy antiquated thing called channel surfing for hours on end. (So is watching "Breaking Bad" in a long sitting, for that matter.) Having watched "House of Cards" I am more convinced than ever that Netflix is pushing something really addictive — and also that shows don't need to be nearly as nice looking, or thoughtful as "House of Cards" to do the trick. We don’t only binge-watch because something is great: Sometimes we binge-watch because something is on. Like Frank says to Zoe, “I am only interested in someone who is available.” When the next episode is always available, it's hard to turn off.