"State-run propaganda": Why does the press protect drone secrecy? 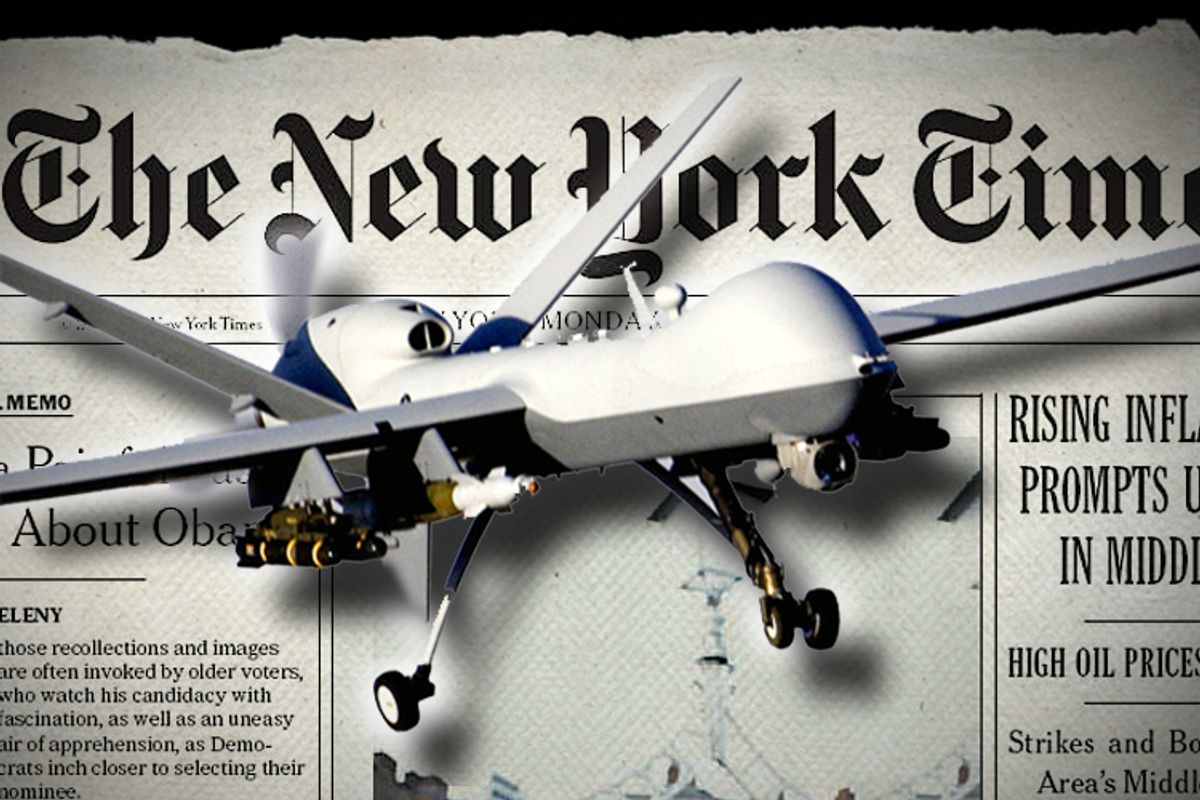 In the last 24 hours, events in Congress have shown how leaders of both political parties have worked together to create a new extra-constitutional precedent -- one allowing the occupant of the White House to execute American citizens without judicial oversight or even concrete incriminating evidence. Indeed, in a capital city where the most petty spats create the illusion of divided parties, we are now seeing a senior Republican U.S. senator proposing a formal resolution congratulating a Democratic president for claiming that imperial power.

This is exactly the kind of thing that rightly sows suspicion that for all the politicians yelling at each other, and for all the media hand-wringing about polarization, in many cases both parties collude to guarantee certain outcomes -- especially on national security issues. Yet, as evidenced by an equally troubling revelation, that collusion is not limited to elected officials. It also extends to the media that is supposed to provide a check on those officials.

"Supposed to" is the key phrase -- because, as the U.K. Guardian shows, that's not what's actually happening. Instead, the British paper reports that major U.S. newspapers "bowed to pressure from the Obama administration not to disclose the existence of a secret drone base in Saudi Arabia despite knowing about it for a year."

Publicly, the newspapers are citing the age-old "national security" trope to justify their decision to suppress the story at the request of the White House. But that catch-all phrase is designed to obscure the real motivation -- the one that one of the papers, the New York Times, let slip out.

In a stunning interview with the paper's ombudsman, managing editor Dean Baquet admitted that the Times decided not to censor the story because it would pose any kind of imminent danger to Americans, but because it might result in the drone program being curtailed. Here's the key excerpt of that interview (emphasis added):

The government’s rationale for asking that the location be withheld was this: Revealing it might jeopardize the existence of the base and harm counterterrorism efforts. "The Saudis might shut it down because the citizenry would be very upset," he said.

Mr. Baquet added, “We have to balance that concern with reporting the news.”

It is not overstatement to call this a genuine watershed moment for American journalism.

Here you have one of the most powerful news organizations in the world publicly admitting that it refused to report a story not because it was concerned about the safety of Americans (aka "national security) but because it believed that doing so might result in people finding out about what's going on and consequently forcing a change in government policy. Put another way, one of the world's most powerful news organizations -- an organization that is supposed to be a check on governmental power, mind you -- literally refused to publish a story in order to keep Saudi citizens from finding out exactly how their dictators were working with the United States to intensify a global military action.

In case you really believe the Associated Press' claim that this really was about the security of U.S. troops at the Saudi base, remember that Gawker's Adrian Chen reports that the base's location had already quietly slipped out a few times in the past.

"This wasn't about the security of Americans," notes Chen. "Any terrorist who was serious about attacking American targets in Saudi Arabia could have used Google to learn of the new drone base months ago. The fact that the Times made no mention of a security concern in their rationale makes the security argument seem suspect. In cooperating with the blackout, news organizations weren't protecting a state secret: They were making the CIA's life easier by suppressing a story that was already out there."

He's exactly right, and a hypothetical helps illustrate how problematic it all is. Can you imagine the reaction if, for instance, a major news outlet openly said it refused to publish a story about a secret tax policy specifically because doing so might result in public outrage and therefore a change in said policy? It doesn't matter whether the tax policy was ultra-conservative or super-liberal -- the notion of any news organization, much less some of the most powerful in the world, publicly saying it suppressed a story to prevent a change in that tax policy is anathema to the most basic understanding of the press's role in society. It would almost certainly generate a huge amount of outrage -- and rightly so.

It's the exact same principle for the policy of headquartering drone strikes in the heart of the Middle East -- refusing to report that story because doing so might result in a change in that policy is an equally outrageous decision.

That such a decision was nonetheless made quite obviously undermines the entire notion that the Times editors (or any editors at the other papers that made the same decision) have any serious regard for objectivity. After all, it is the definition of ideological bias to deliberately refuse to publish a story out of fear that doing so will more fully inform readers and consequently result in a particular public policy change. And it's not just run-of-the-mill bias either. It is the most devious, insipid kind -- the kind that is inflicted by omission and therefore invisible. In Fox News' terms, it's the ethos of "we don't report, and therefore we decide."

But perhaps even more problematic than the bias is the government-media collusion that is never supposed to occur in a democratic society.

One of the reasons a free press is so necessary to a functioning democracy is so that it can shed light on the actions of the people's government -- even if that light reveals taboo facts. Clearly, though, the opposite is happening -- major news organizations made the decision to turn that light off precisely because it would reveal such politically inconvenient truths.

This is why Lehigh University journalism professor Jack Lule was right to tell the Guardian that we now "have two partners’ participation in the secrecy of the drone program, the government and the news media."

The other label for that is "state-run propaganda." That's a term Americans may not be comfortable with -- but unfortunately it's a term that accurately describes more and more of what we see, read and hear when it comes to national security.