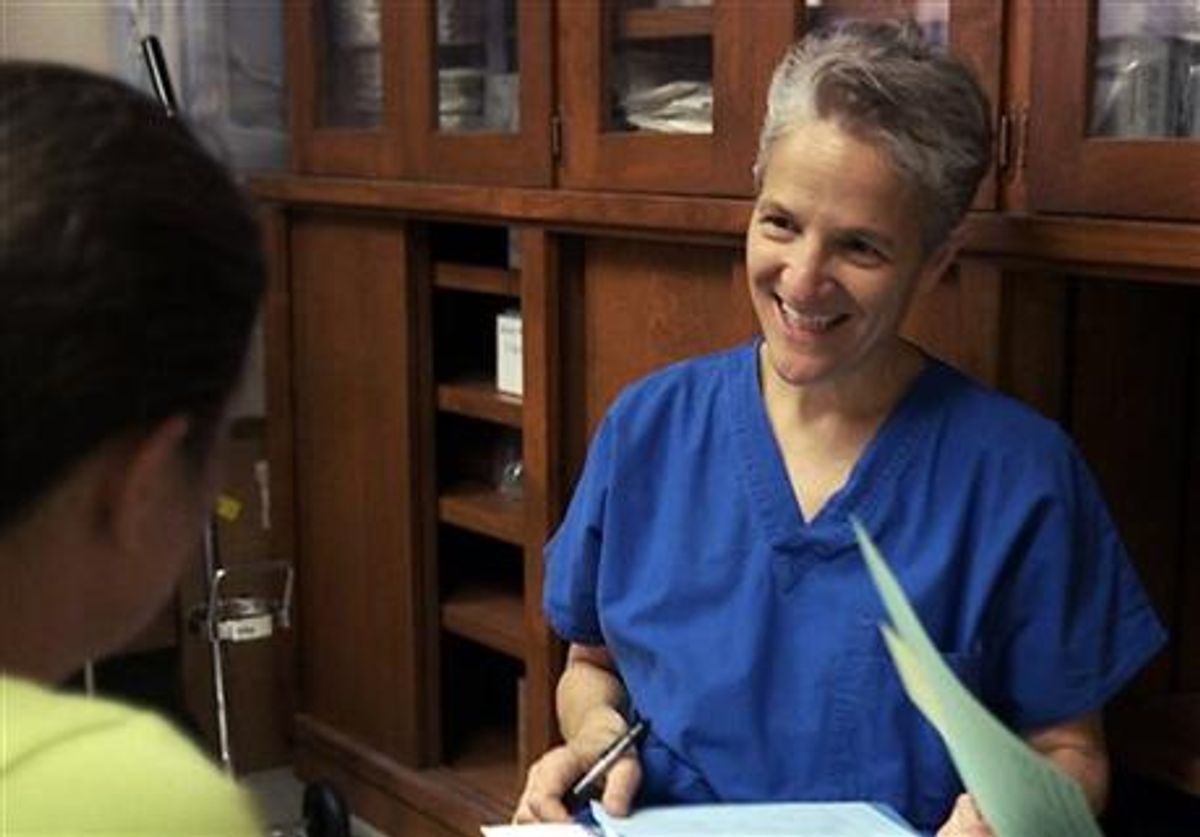 ALBUQUERQUE, N.M. (AP) — The New Mexico Medical Board on Thursday exonerated an Albuquerque doctor of gross negligence for her handling of a late-term abortion in a case that raised questions about whether politics trumped patient privacy.

Anti-abortion activists filed the complaint against Dr. Shelly Sella after hearing a 911 call from the Southwestern Women's Options Clinic about a woman who suffered a ruptured uterus during a May 2011 abortion there and was rushed to a hospital. Sella is a former colleague of slain Kansas abortion doctor George Tiller and one of the few doctors in the country who still openly performs third-term abortions.

The New York woman had sought the abortion after finding out the fetus had severe brain abnormalities. She was not part of the complaint.

Instead, the medical board opened the probe based on the phone call submitted by members of Operation Rescue. Nearly two years later, the intimate details of the 26-year-old mother's medical treatment, mental state, her religion, where she lived and family status became public record in transcripts from a three-day hearing where a board prosecutor accused Sella of gross negligence.

Sella's attorney, Molly Schmidt Nowara, commended the board for rebuffing a complaint from people whose "motivation is purely politics."

"I think this outcome shows that the process works," Nowara said. "This is great news for the women of New Mexico."

The complainant, Cheryl Sullenger of Wichita, Kan., issued a statement saying the "decision to protect abortionists and their below-standard procedures that endanger women and violate the law only serves to place more women at risk."

The board voted unanimously to clear Sella, with one of its eight members absent.

The case involved a woman who was referred to the clinic by her doctors in New York after the problems were found with her fetus. According to testimony in the case, the Albuquerque clinic is one of only four in the country that openly do late-term abortions, which have been banned in several states in recent years.

Supporters of abortion rights say the procedures are rare and used only in cases where the mother or child's health is at risk. Abortion opponents say late-term abortions are a danger to mothers and painful for the unborn baby. The procedure involves injecting the fetus with a drug to stop its heartbeat and administering drugs over the next three to four days to prepare the cervix and induce labor.

Sella gave the woman drugs commonly used in late-term abortions — drugs that, according to transcripts in the case, are known to potentially lead to contractions strong enough to cause uterine ruptures in women who previously have delivered a baby through cesarean section, as this woman had.

Records show the patient, who returned to New York three days after the rupture was repaired, was warned of the risks. But board prosecutor Daniel Rubin argued proper standards of care were not followed. At issue was whether abortion providers should be held to the same standards of care that apply to live births, such as whether such a risky procedure so late in a pregnancy should have been done in a hospital rather than a clinic.

The case also raised questions about patient privacy. The name of the woman who had the abortion has not been released, and the November hearing was closed to the public. But the transcripts are public record.

Marc Rotenberg, president and executive director of the Electronic Privacy Information Center in Washington, said the case "underscores the sensitivity of medical records and the need to keep them private."

He pointed to a 2004 decision by the 7th U.S. Circuit Court of Appeals that blocked an attempt by the Justice Department under Attorney General John Ashcroft to get redacted abortion records from a Chicago hospital for a trial on the constitutionality of late-term abortions. The opinion said opening even redacted medical records was a violation of privacy and that the details could lead to a patient being identified and harassed.

Lynn Hart, the New Mexico Medical Board's executive director, said the panel has authority to open an investigation into any medical case in the state, regardless of who files the complaint. She said it has the subpoena authority to obtain patient records with or without a patient's consent, and it is exempt from federal medical privacy laws.

Sullenger said Operation Rescue had no contact with the patient in the Albuquerque case, and has no interest in revealing patients' identities.

"We are actually about protecting them," she said. "We believe that if these abortionists did not employ these dangerous practices, we would not have these problems."

Sullenger said Operation Rescue has some 100 complaints pending with medical boards around the country based on information it gets from things like 911 calls for ambulance runs to abortion clinics. The group's efforts focus on all abortion clinics, not just those that do the procedure on women in their final trimester.

Its tactics have had varying results. In 2005, for instance, a Kansas judge dismissed a public records lawsuit from Sullenger after she was denied copies of 911 calls involving Tiller's clinic. But the group was successful, through similar complaints, in winning the revocation of the medical license of Dr. Ann Kristin Neuhaus, who provided second opinions for Tiller. She is appealing that decision.

Operation Rescue believes it ultimately would have won the revocation of Tiller's Kansas license if he had not been killed by an anti-abortion zealot. Sella's license in Kansas was cancelled at her request after she moved to New Mexico.