"Side Effects": A chilly, mysterious thriller ends a strange and brilliant career

If Steven Soderbergh is really quitting, the icy, satirical "Side Effects" captures his strengths and weaknesses 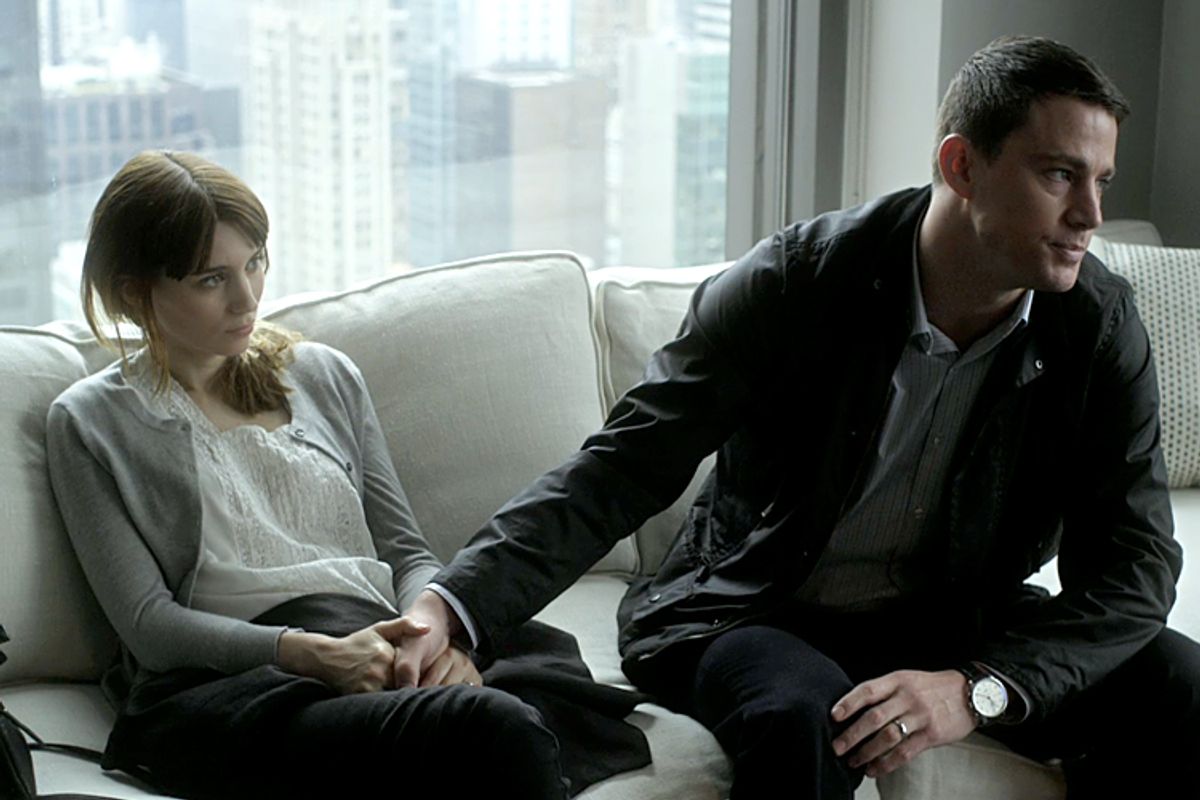 Rooney Mara and Channing Tatum in "Side Effects"
--

It’s not enough to say that the absence of human feeling is characteristic of Steven Soderbergh’s films. It’s more that the absence of human feeling is Soderbergh’s principal subject matter, and central to his diagnosis of contemporary society and its pathologies. From his 1989 debut with “Sex, Lies, and Videotape” onward, Soderbergh has seemed divided between a yearning for human contact and a (supposedly) detached and dispassionate belief that it can’t happen anymore and maybe never could.

In Soderbergh’s new movie “Side Effects,” which he says will be his last as a cinema director, all human interaction is mediated by some abstract force, whether that’s money or a commodified and quotation-marked notion of sexuality or an impressive range of psychoactive pharmaceuticals, most notably a fictional antidepressant called “Ablixa” that serves as an enormous plot MacGuffin. This follows such recent Soderbergh films as “Contagion” (scripted, like “Side Effects,” by frequent collaborator Scott Z. Burns), whose true protagonist is arguably a pandemic virus; “Haywire,” in which almost every meeting between characters leads to violence; and “Magic Mike” and “The Girlfriend Experience,” tonally opposite but thematically linked films that depict human sexuality as a marketplace and prostitution as its governing metaphor.

Whether Soderbergh’s essential problem with the universe is philosophical (it’s human nature to long for the unattainable) or political (the rift is caused by modernity, capitalism, etc.) is best left to the authors of dissertations yet to be written. In fact, I think it’s the wrong question. Soderbergh is a master craftsman first and foremost, a formal stylist who may be without peer in contemporary American cinema, and he always follows the dictates of form. If his studio pictures like “Out of Sight” and the “Ocean’s” series paint a sunnier picture of human relations than his chilly low-budget indies do, that’s because big commercial movies demand a happy ending. So too did “Magic Mike,” despite its minuscule budget, since that movie’s essentially a gender-reversed tale of the hooker with a heart of gold and the regular guy who redeems her through love.

In Soderbergh’s controversial and exciting four-hour drama about the 20th century’s most famous guerrilla, the idealistic or utopian vision that supposedly motivated Che Guevara is almost never mentioned. Instead, “Che” defines its protagonist as a morally ambiguous man of action, both in his ascent toward victory in Cuba and his descent toward ignominious defeat and death in a Bolivian backwater. It’s tempting to view “Che” in retrospect as a fable about the artist or filmmaker’s job, where what you say is a lot less important than what you do, or to seek analogies between Guevara’s up-and-down career and Soderbergh’s. Too tempting, no doubt – although Soderbergh has said he first began to contemplate retirement after completing that punishing production.

I can feel Soderbergh, from several New York neighborhoods away, almost physically resisting my attempt to psychoanalyze him through the motion pictures he has made, and he is undeniably well defended on that front. With a few exceptions, he gave up writing his own screenplays early in a career that has veered from studio tentpole productions to no-budget, no-audience indies and all points in between, exemplifying the essentially collaborative and haphazard nature of American filmmaking. While he has no objection to talking about the philosophical implications of his movies, he does so with technical dispassion, in the same spirit as talking about lenses and color schemes, or his favorite moments in Hitchcock or Howard Hawks.

So I won’t reach too far to read “Side Effects” as some kind of Soderberghian grand statement or swan song. For one thing, even calling this slick and deceptive thriller his “last movie” is a term of art that’s almost meaningless; “Behind the Candelabra,” with Michael Douglas as Liberace and Matt Damon as his younger lover Scott Thorson, will hit HBO later this year (largely because the major studios didn’t want it). Still, let’s say this: “Side Effects” is highly representative of a certain strain in Soderbergh’s work. It’s got movie stars getting a chance to play ambiguous characters, with Rooney Mara as a depressed young wife, Channing Tatum as her befuddled financial-hustler husband, Jude Law as the cocksure shrink plying her with drugs, and Catherine Zeta-Jones as a mystery woman from the past. It’s masterfully shot and edited, with a brooding soundtrack and a mysterious, dreamlike undertow – and, when all is revealed, it’s not even half as interesting as it seems to be. "Haywire" or "Contagion" or "Magic Mike," all terrific examples of Soderbergh's mid-career control over the medium, would have been better movies to say goodbye with. But then, nobody ever accused this dude of being sentimental.

Many of my complaints about “Side Effects” have to do with aspects of the plot I obviously shouldn’t discuss in detail. For now, let’s say that Burns’ screenplay requires an increasingly ludicrous suspension of disbelief, and that what initially feels like a dark, hard-edged satire about psychiatry, finance, Big Pharma and the justice system eventually gives way to a thriller plot that’s both hackneyed and implausible. You almost get the feeling the whole movie is fundamentally insincere and enclosed with quotation marks, as if Burns and Soderbergh sat around watching and rewatching “Fatal Attraction” and “Basic Instinct” (and “Vertigo” and “The Man Who Knew Too Much”) and deciding what to pilfer.

Soderbergh shows us the aftermath of a violent crime, likely a murder, in the first seconds of the film – but we don’t know who’s dead, or who did it. Then we go back several months in time and meet Emily Taylor (the impressive, chameleonic Rooney Mara), at that point a mousy, stringy-haired creature who ends up in a Manhattan emergency room after an apparent (if ambiguous) suicide attempt. Jonathan Banks (Law), the suave British shrink who treats her, agrees not to hospitalize her if she’ll begin treatment with him promptly. No, he’s not a creep or a perv, in classic movie-shrink fashion; what ultimately makes Banks so disturbing is that he believes he’s doing the right thing all along, but is hemmed in by a medical system, or a world (or just a movie) that makes bad things get worse rapidly.

Banks has no predatory interest in Emily, exactly, but her case is precisely the sort of challenge that attracts ambitious professionals. Her husband (Tatum) is about to be released from prison after doing time for insider trading. Emily seems overwhelmed by worsening anxiety and depression, and there seems to be some unresolved tension with her previous shrink, Victoria Siebert (Zeta-Jones), out in the leafy Connecticut suburbs. It’s Siebert, looking rather too much like the crazy but seductive ice-bitch out of an ‘80s thriller, who first suggests to Banks that her former patient might do well on Ablixa. He’s a true believer in psychopharmacology who’s pumping his blond trophy wife (Vinessa Shaw) with beta-blockers and doing lucrative consulting on the side with a different pharmaceutical company. I mean, this stuff has all been tested, right? What could go wrong?

OK, I’ve said about 5 percent too much, but that’s all, I promise. Soderbergh is partly cashing in on the fact that half the viewing audience will be personally familiar with drugs like Zoloft and Wellbutrin, and 100 percent of us will be at least mildly uncomfortable with the long-term personal, social and environmental consequences of all those pharmaceuticals. Even if “Side Effects” is not ultimately about those questions, it is about Banks’ arrogance and unfounded optimism, which stands in for our own. We’d like to believe that our SSRIs and MAOIs will bring us happiness, that love is real, that art or spirituality can offer transcendence. Steven Soderbergh would like to remind us that it’s all a trick, and we’re on our own.

“Side Effects” opens nationwide this week.