"Identity Thief" stole my brain, and now I hate everything

How do Melissa McCarthy, Jason Bateman and a decent-sounding premise end up as lazy, paranoid garbage? 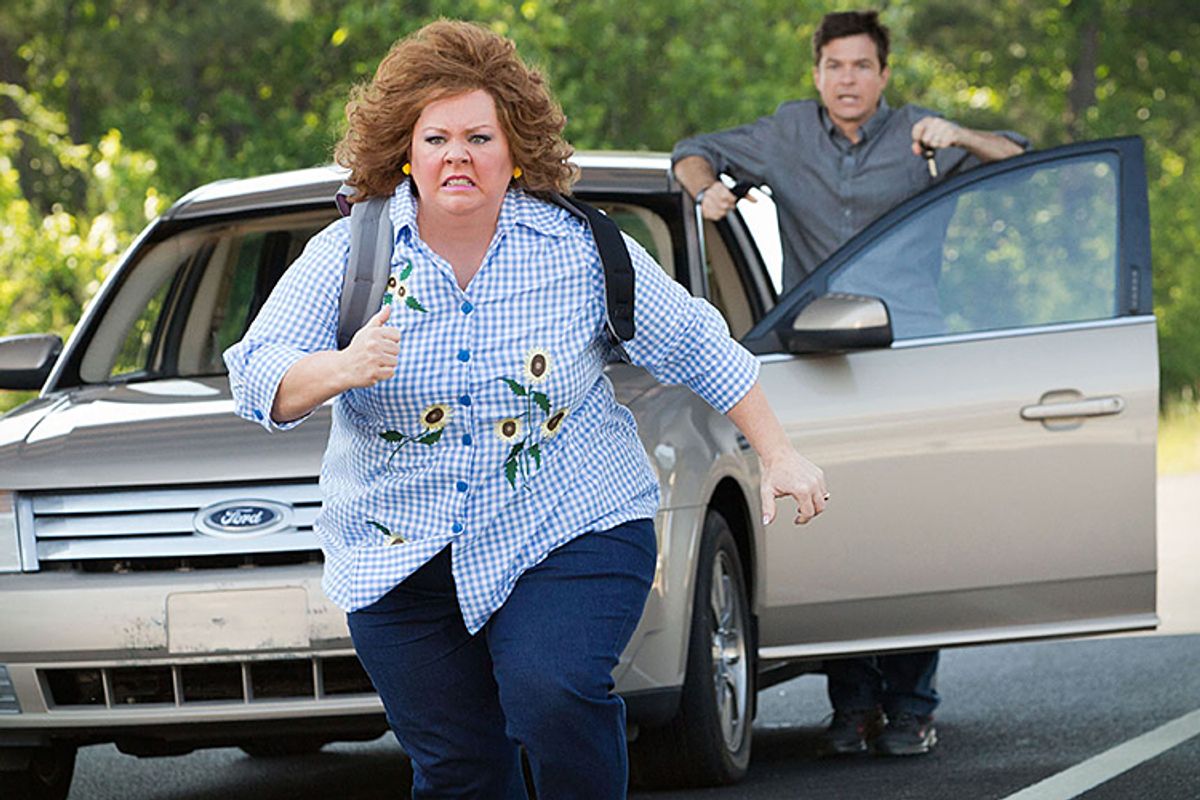 If the Jason Bateman-Melissa McCarthy comedy “Identity Thief” isn’t the worst Hollywood comedy ever made, that’s only because it lacks the spark of conviction and genius – the thoroughly misguided belief in itself – that distinguishes something like Adam Sandler’s “Grown Ups.” But considering that it starts out with two distinctive and likable stars and a reasonably promising premise, “Identity Thief” reaches impressive heights of laziness and idiocy. We’re always supposed to say that actors are not responsible for their most terrible films, but it isn’t quite enough for Bateman and McCarthy to fire their agents, or return unopened next year’s holiday cards from whatever Universal Pictures executive actually watched this film and then decided to release it. They need to seriously consider firing themselves, or at least placing themselves on administrative leave (also known, in this business, as television).

I almost never walk out of movie screenings that I’ve actually bestirred myself to attend, but only some perverse and self-punishing sense of honor kept me in my seat for this one. Here I am, two hours closer to the moment of my death, and I spent those hours wriggling like a toddler while McCarthy mimed oral sex on corpulent cowboys and Bateman desperately mugged his way through a role as Sandy Patterson, a supposedly average corporate drone who is endlessly mocked for having a “girl’s name.” I see that aimless gag as unhappily symbolic; no one in this movie has a wide enough frame of reference to have met a guy named Sandy before, and the movie itself displays exactly the same kind of ignorance and incuriosity, not to mention free-floating paranoia.

I remember laughing at an Ayn Rand joke early on, which suggested that Craig Mazin’s screenplay once contained some vague political ambitions. Trying to explain to Sandy why the brass at his financial firm are receiving six- or seven-figure bonuses while the regular schmoes get diddly-squat, his jerkass boss tells him, “I’ll get you a copy of ‘The Fountainhead.’ Then you’ll see why this is good for everybody.” And once in a while, McCarthy’s nasty-girl shtick is amusing, as when she finally meets Sandy’s wife (Amanda Peet, criminally underutilized here) and assures her, in overly graphic woman-to-woman detail, that nothing happened between her and Sandy on their long and intimate road trip across the country, with rednecks and black people in hot pursuit.

I refuse to offer anything like a normal plot synopsis, because that might imply to the gullible that this movie makes any damn sense, or that there’s some reason to care about what happens in what order. McCarthy plays a brassy Florida hustler who may or may not be named Diana and who uses a lame, low-tech ruse to borrow Sandy’s identity, run up massive debts on his accounts, get arrested under his name and so forth. All that is vaguely possible – although it’s more likely to involve someone in Estonia or West Africa – but I can’t even really explain why Sandy, who’s supposedly a financial professional, can’t deal with this through official channels and feels the need to fly to Florida and confront an unknown criminal in person. I mean, that makes sense, right?

Well, OK – this happens because Mazin or director Seth Gordon (of “Horrible Bosses,” which seemed atrocious at the time but now looks like a lost masterwork of Preston Sturges) or some suit in Burbank decided they wanted, and I quote, “a ‘Planes, Trains and Automobiles’ meets ‘Midnight Run’ type of thing.” Whoever said that yawned and went back to sleep with a copy of “The Fountainhead” over his face, leaving the filmmakers to inflict their incoherent rage on the audience. So we get Sandy, a high-strung and not super-likable character, and the poorly defined Diana, who’s a little bit the Funny-Sexy Fat Chick and a little bit the Scary-Pathetic Crazy Woman, driving across the country together in a rented Ford Focus, with multiple plot-complication-slash-criminal-stereotypes after them for unclear reasons.

Christ, it’s painful. Apparently only two things can happen to you if you leave the interstate in America – you wind up in a weird three-way sex situation with a fat and hairy cowboy or, if you venture into anything that resembles nature, you wind up covered with snakes, one of which immediately goes for the ‘nads. I suppose in Freudian terms it’s the same thing, and the makers of “Identity Thief” are performing a public service by reminding us to stay home lest the snake-dicked Texas bisexuals get us. Maybe this is a remake of "Deliverance," disguised as comedy. I would respect “Identity Thief” a little more if it ended with that sort of vision of chaos and terror and despair. But of course it doesn’t, retreating from all its icky, paranoid and hostile gags into the dumbest kind of sentimental conclusion where everybody loves everybody. Not me, though, not after this.