The Internet will not ruin college

As cheap online educational options spread like wildfire, critics are sounding the alarm. They're too late 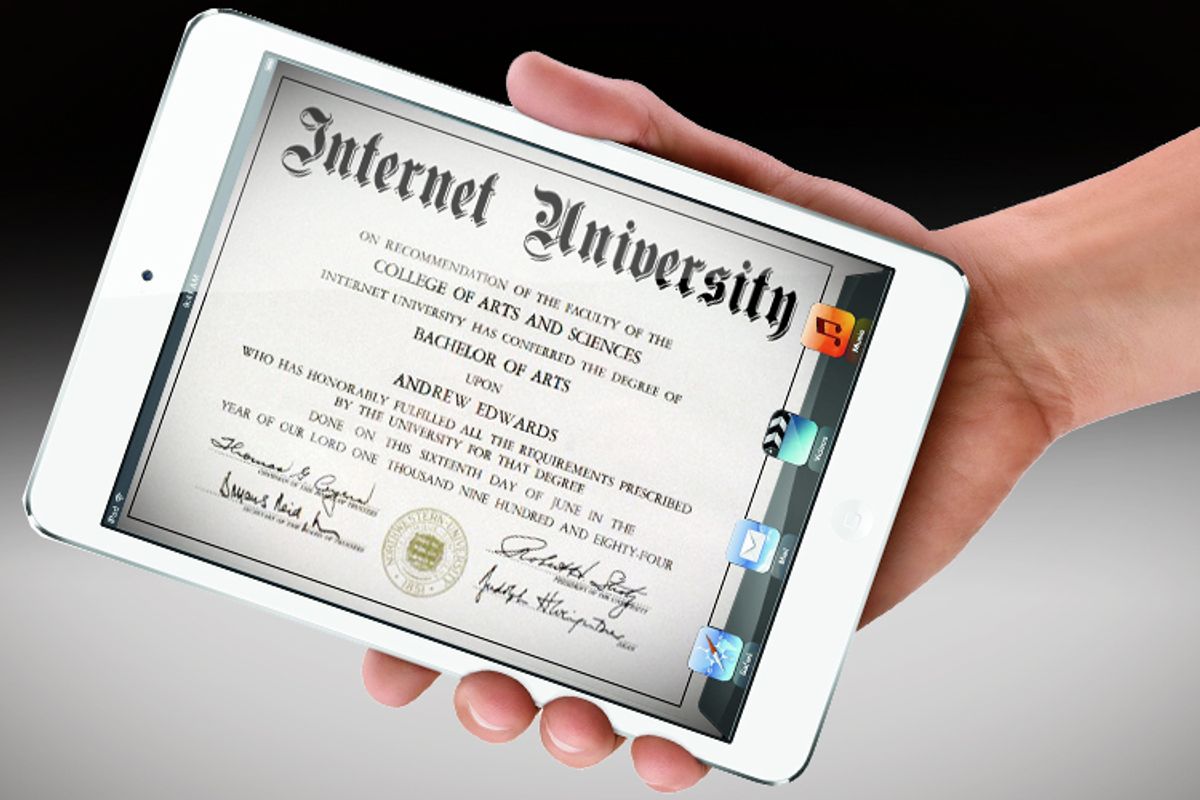 I barged into my son's room on Wednesday afternoon to ask him when he wanted dinner, and discovered him watching a Khan Academy video to help with his chemistry homework. And I thought: that story I've been working on about the backlash against MOOCs (Massive Online Open Courses)? Why am I even bothering? The war is already over. Debating the value of online education at the current moment in history makes about as much sense as questioning the tactics of the losing Roman generals in the great third century B.C. battle of Cannae. Perhaps of some interest to academics, but moot. Hannibal kicked ass. End of story.

I am not arguing that we shouldn't be looking long and hard at exactly how online courses are "disrupting" education, with special attention devoted to who plans to profit from new delivery models and how taxpayers will inevitably get screwed. What I'm saying is we have to start from the position that the tidal wave is already here. Indignation, however righteous, is beside the point. The kids who are cutting their teeth on Khan Academy videos for help with their chemistry and calculus homework will grow up correctly assuming that there will always be low-cost or free educational opportunities available to them online in virtually any field of inquiry. They will naturally migrate to the best stuff and be less and less willing to pay for crap. This will cause a lot of trauma for the educational establishment, but that's not the problem of the next generation that wants to learn.

A friend of my son taught himself how to play the ukulele from YouTube videos last summer. Perhaps that doesn't sound like a threat to the college education status quo, but it should. Because the principle at work is irresistible: The Internet vastly decreases the costs of distribution of anything that can be digitized, whether you want ukulele lessons or Artifical Intelligence for Robotics. We can't help but take advantage of this fact. Right now, if you want to learn remedial algebra or study the ancient Greek idea of the hero, as taught by a Harvard classics professor, you can, for free (or at the very least, for vastly less than what it would cost at a brick-and-mortar-and-ivy campus). Tomorrow, there will only be more options.

After years of hype about how the digital revolution was going to slice and dice the ivory tower, it's all starting to happen very fast. It's no wonder that alarm is spreading in many quarters. 2012, reported the New York Times, was the Year of the MOOC. Venture capital-funded Stanford spinoffs such as Coursera and Udacity are growing like weeds. Hundreds of thousands of students have enrolled in classes offered by edX, the nonprofit online education project started by Harvard and MIT. Cat: out of bag. Genie: out of bottle. Pandora's Box: wide frigging open.

In mid-January, Udacity announced a deal, partially brokered by California Gov. Jerry brown, to provide a series of "remedial and introductory" courses for incoming students who, as has been the case for years, are arriving at San Jose State University woefully unprepared for college-level courses. On Thursday morning, Coursera announced that four of its courses aimed at undergraduates, a precalculus course from the University of California, Irvine, courses in genetics and bioelectricity from Duke, and another calculus course from Penn, had been approved for college credit by the American Council on Education’s College Credit Recommendation Service.

These are important, critical steps, signs that soon students of all ages and economic backgrounds are going to be able to mix and match lesson plans that offer real college credit. But fast change is usually destabilizing, and a backlash is in full effect.

The critics of the evolving landscape are eloquent and impassioned and the points they make should not be ignored. The fact that Silicon Valley venture capitalists see a profit-making opportunity offers zero assurance that the public interest will be served. Details about the financial parameters of the Udacity-San Jose State deal are limited, but the possibility that any taxpayer money is being funneled directly to for-profit MOOCs at a time when the state university system is woefully underfunded should be sounding warning bells up and down the San Andreas Fault.

Quality assurance in the emerging MOOC world, at this point, seems pretty hit or miss. Coursera invited merciless mockery earlier this week when a professor at Georgia Tech was forced to suspend a huge online class due to operational difficulties: The topic: "Fundamentals of Online Education." (Somewhere, Sophocles is chuckling at the irony.) There's also little doubt that lectures delivered online to thousands of students at once, with limited capacity for feedback from educators to the educated, and huge logistical conundrums involved with assuring adequate grading and testing, are never going to be equivalent in quality to small seminars taught by brilliant professors who are able and willing to instigate vigorous classroom debate and keep copious open office hours.

One must also ask: What happens to the people who make their livings from teaching, when their jobs are replaced by online courses available for free? All we need is one superb remedial algebra course that can be effectively delivered online and, theoretically, the demand for a zillion remedial algebra courses taught at a zillion community colleges suddenly drops off a cliff. Ask the music business what happens when you can get good stuff for free instead of paying for crap. Daily newspaper journalists learned a similar lesson all too well over the past two decades. The Associated Press business model -- licensing the same story to multiple outlets, doesn't make a whole lot of sense once a single news outlet puts that AP story online for free.

For months, Clay Shirky, an academic at New York University who could be dubbed the High Priest of Inevitable Internet Disruption, and Aaron Bady, a doctoral candidate in literature at the University of California at Berkeley, have engaged in a fascinating debate about the implications of MOOCs for education. For a top-level view of the argument, readers are well served by Maria Bustillos' distillation one week ago in the Awl, in her somewhat unfairly titled article "Venture Capital's Massive Terrible Idea For the Future of College." Or you can read the blow-by-blow back and forth here, here and here. (To further punctuate the timeliness of this debate, Shirky published another broadside in the Awl, "Your Massively Open Offline College is Broken" even as I was writing this piece.)

The exchange is great, not least because of the clear respect the two parties have for each other throughout (which is not always the case when the Internet's impact on society is being debated), but also because, in my own view, neither side is necessarily wrong. Aaron Bady is absolutely right to be skeptical of the utopian protestations of people like Stanford's Sebastian Thrun, the founder of Udacity, who has predicted that in 50 years there will be only 10 universities left in the world. The venture capitalists who are backing Thrun are looking for big returns, but big profits have never been a guarantor of a good education. And of course, all students are likely to benefit more from regular, physical interaction with vibrant student bodies and dynamic professors. Four years of education at a place like U.C. Berkeley? In a perfect world ...

But Shirky is equally right to note that right now, we have an educational system packed with thousands of mediocre schools charging astronomical tuitions to offer hundreds of thousands of students mediocre educations. My own daughter is a freshman at a U.C. campus, and has already experienced lectures attended by more than 500 students with sections led by teaching assistants who are utterly uninterested in doing their job. For dollar paid, the value received is questionable, and whenever that kind of situation exists, the status quo is ripe for disruption. (It's also worth noting, perhaps, that over 60,000 students applied for spots in a freshman class that ended up enrolling only 4,500 applicants, a sign, I think, that the brick-and-mortar university is in no imminent danger of going the way of the dinosaur.)

Shirky also has logic on his side when he notes how the disruption of education is merely the latest chapter in a book that's been writing itself since we first started to log on in the mid-'90s. The music biz and journalism biz have been thrown into turmoil -- education's turn in the spotlight was going to come, sooner or later.

But I'd go a little further. Education, I'd argue, has always been the most likely sector of society to get transformed by the Internet, because the thing the Internet does better than anything else is distribute information. Distribution is not synonymous with learning, of course, but how could anyone argue against the premise that our ability to educate ourselves, on just about any topic, has vastly expanded in tune with the maturation of a global network of computers? It's kind of amazing that it's taken this long to start figuring out how to offer truly high-quality college level courses over the Web -- isn't this exactly what the damn thing is for?

Late last night, while browsing some of the various course offerings available at edX and Udacity and Coursera, I had to restrain myself from suddenly diving into The Ancient Greek Hero, Professor Gregory Nagy's spring 2013 edX offering that promises "to use the latest technology to help students engage with poetry, songs, and stories first composed more than two millennia ago." It strikes me as a profound realization of the fundamental goal of the university -- any university -- that a course taught by an icon at one of the most elite institutions in the world would be accessible to me for just the cost of a few clicks.

But it seemed like too big a commitment to make while on deadline, so I ended up browsing what the Khan Academy had to offer in "medieval and ancient history." The six videos available right now are hopelessly eclectic: hardly the stuff of a rigorous educational program in anything, but I was titillated by one title: "Sumerian Art: Standard of Ur." I mean, how could one resist an Internet lesson in art history appreciation of an object 4 millennia old?

And I loved it. And I wanted more. And I'm utterly certain that the Internet will give me and my descendants as much or more than we can handle.

There are sure to be bumps in the road as snake-oil capitalists try to figure out how to extract profit by exploiting a medium that excels at delivering intellectual goods at the lowest possible cost. Can Coursera or Udacity really make money by charging token amounts for "certificates" that prove a student deserves college credit for passing an online course? I have no idea. Will edX keep expanding its free online offerings to the point that for-profit bottom feeders like Corinthian College simply can't compete? I sure hope so, but again, I don't think anyone can say for sure how this will all play out.

But what's absolutely clear is that a vast number of people can't afford a good education, and many of those who are paying through the nose aren't getting a good education, and that kind of situation provides a clear opportunity for the Internet to do what it does best: spread knowledge at low cost. Sure, we should be skeptical of the promises made by snake-oil salesmen, but we should also be very excited. For years we've just been scratching at the surface of what the Net can deliver. Now we're beginning to dig deep.