Love in the time of emojis 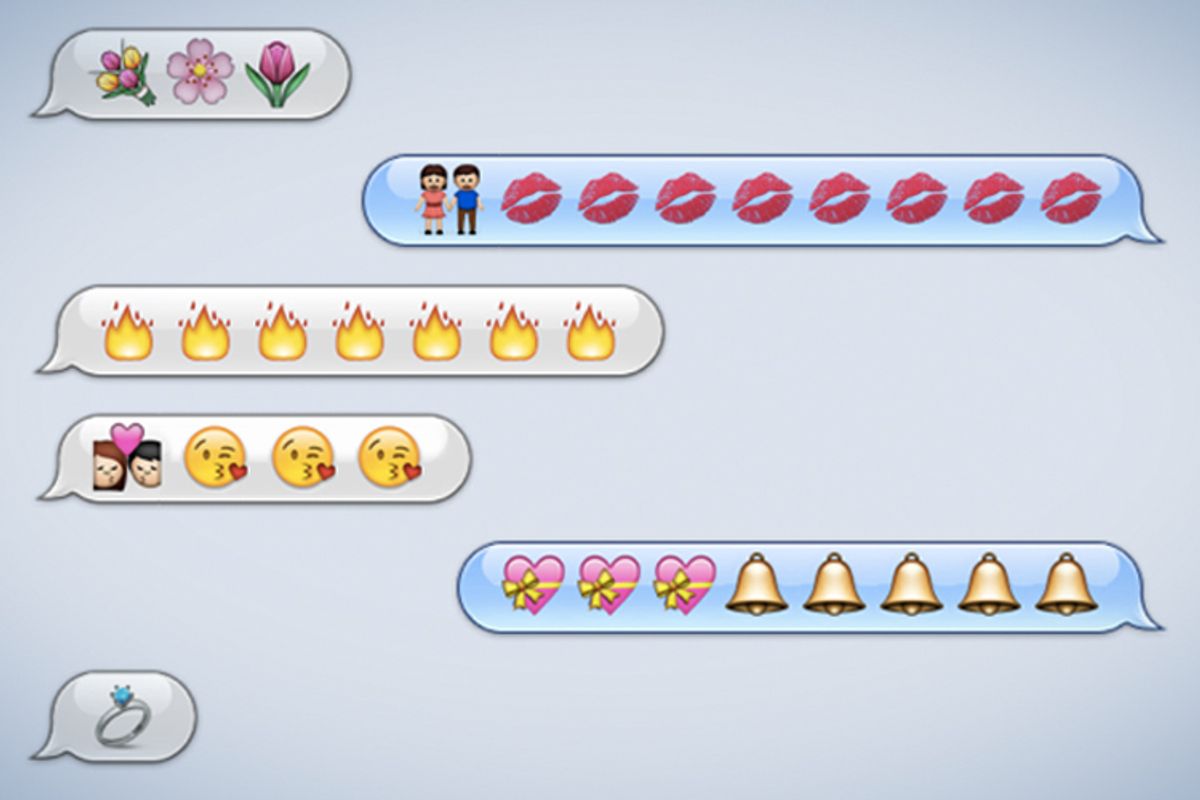 I recently looked up from my iPhone, turned dramatically to a friend and declared, "My love life has been hijacked by emojis."

It wasn't a complaint so much as an expression of genuine surprise -- an emoji of Edvard Munch's "Scream" (which, yes, exists). I'm a stickler for correct spelling and punctuation, and a hater of lazy text-message abbreviations, but here I was texting my boyfriend, "Good morning," followed by a series of emoticons of "sweet stuff'" -- an ice cream cone, a bowl of ice cream, cake with candles, a slice of cake. Then I giggled at his response: a graphic of a swelling heart. I haven't communicated like this since my pen met an all-pink Hello Kitty diary in fourth grade.

But I'm not the only one who has been reduced to communicating with paramours in the virtual equivalent of Lisa Frank stickers. In the Season 2 premiere of HBO's "Girls," Ray tells Shoshanna, "You know, when I'm not around you, when you just send me a text full of emojis, it is so easy to dismiss you." She responds, "What is wrong with emojis?" And he replies, "A panda next to a gun next to a wrapped gift? It makes no sense." (Ooh, but that's exactly the point sometimes!) On NBC's "Parks and Recreation," Tom Haverford explains emojis to luddite Ron Swanson: "Emoji are little cartoons you text instead of words. Instead of saying 'What up, boo?' you can type what up, and then a little ghost. 'Cause that means boo."

Emojis, pixelated graphics that can be sent electronically -- a Japanese improvement on the sideways smiley face -- aren't only used for romancing, of course. They are generally in the cultural zeitgeist right now: Consider this NewYorker.com think-post on the phenomenon, and a viral wannabe New Yorker cover composed entirely of emojis, which Gawker's Max Read enthusiastically declared, "the best New Yorker cover that never ran." New York magazine conducted an interview -- by text message, naturally -- with emoji-maker Willem Van Lancker.

That's all within the last couple of months, thanks to the introduction of iPhone's native support of emoji (which is to say, the ability to use the graphics without first downloading a special app) and an injection of new characters with iOS 6. It's a tool perfectly made for our time of OMG-irony. But they have a special significance in the realm of romance: They're a rebellion of cute in the age of the dick pic.

There are so many emojis to choose from: a winking smiley-face doling out a smooch, a stock boy and girl -- or with the latest update, boy and boy or girl and girl -- holding hands or gasping at the big pink heart that's materialized in-between them. I count nine different versions of a heart, and that's not even including the heart-accented smiley-faces. Saying "you're the key to my heart," "you ring my bell," "you're the apple of my eye" is genuinely corny -- but include an emoji of a key, heart, bell, apple or eye in place of the word itself and it's actually kinda cute (especially if you add in a couple of self-mocking emojis of corn). It's like charades, without all the awkward gesticulating.

Even the most graphic of emoji compositions show sex as it is: absurd, hilarious -- and fun. (For NSFW examples, see here and here.) As someone who came of age just as the Internet did, I find it a nostalgic return to the dirty ASCII penis and breast renderings in mid-'90s AOL chat rooms. An emoji-sext -- if I may dare to obnoxiously call it that -- is a rare exercise in sexual imagination amid pornographic sensory overload.

Of course, not everyone's looking for a respite: As one friend told me of her relationship: "We're fine with dick pics." And often emojis are simply a modern convenience: As a Twitter follower told me of texts with his girlfriend, "Frequently-used emoji become a shorthand, our own private pictorial language."

The rest of us, though, will treat the international keyboard option as our playground -- like hipsters competing in dodgeball on a tennis court in Williamsburg or grown-ass adults doing anything that they do here in San Francisco. It's just a new way to be playful, vulnerable and a little bit dorky, all while dressed up in the armor of irony. There is so much to be annoyed at, and jaded about, when it comes to modern romantic communication: horrifically misspelled online dating profiles, last-minute texts to "hang out" at midnight, unsolicited dick pics, the inability to escape the bings and buzzes of your date's virtual appendage -- the list goes on. Look, no one's expecting a bouquet of flowers here, but a virtual rose doesn't hurt.

As I wrote this, my boyfriend sent me a text of a smooching smiley face next to two melons -- and you know what? I couldn't have found it cuter.