His trashing the president reminds liberals that Obama isn’t quite “Cheney-lite” on national security. Updated 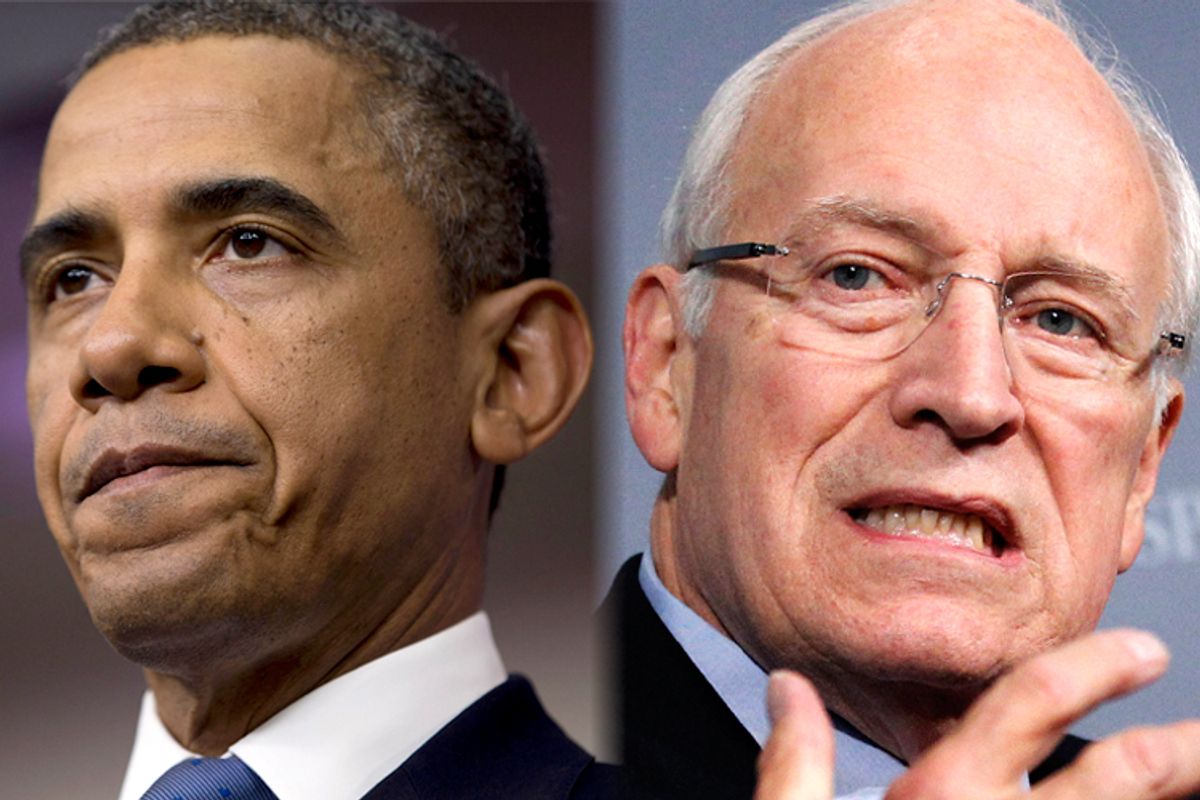 With new friends like John Bolton, who recently praised President Obama’s targeted killing policy as “consistent with and really derived from the Bush administration approach to the War on Terror,” Obama needs some old-fashioned enemies. Just in time, Dick Cheney breaks his months of silence with a slashing, over-the-top speech denouncing Obama’s national security nominees as “second-rate” and charging, again, that he’s making the country less safe.

"The performance now of Barack Obama as he staffs up the national security team for the second term is dismal," Cheney said in comments to about 300 members of the Wyoming Republican Party reported by the Associated Press on Sunday.

"Frankly, what he has appointed are second-rate people," he said, for the positions of secretary of state, secretary of defense and CIA director -- John Kerry, Chuck Hagel and John Brennan, to be precise.

Predictably the top neocon had the toughest words for Defense nominee Hagel, even though they’re both Republicans. Cheney joined the realm of conspiracy theorists by suggesting that Obama picked Hagel so he has “a Republican that he can use to take the heat for what he plans to do to the Department of Defense." That’s a new one.

You’d like to think old five deferments Cheney could muster a tiny bit more respect for the twice-wounded Vietnam War veteran Hagel. But you’d be disappointed. He also might have noted that Brennan, who ought to be Obama's most controversial nominee but is not, served as director of the National Counterterrorism Center under Bush and Cheney.

Cheney criticizing Obama is nothing new: He made news by attacking the president-elect a week before his inauguration in 2009, telling the PBS NewsHour’s Jim Lehrer that Obama would “put the nation at risk” if he ended torture as he promised. Cheney used to regularly go on about Obama being soft on terror, often using Politico the way Sarah Palin uses her Facebook page, to make substance-free charges without being challenged.

After Obama presided over the killing of Osama bin Laden, we heard less from Cheney for a while, but he did pop up on the Daily Caller to celebrate the anniversary of Sept. 11 last year by blasting Obama for taking sole credit for killing bin Laden, as well as charging that he regularly missed intelligence briefings. It’s progress, in a way, that Cheney’s latest broadsides came at a meeting of his home-state GOP, not on a big national stage. (And even as he attacked Kerry, both of Wyoming’s GOP senators, in attendance, voted to confirm the Massachusetts Democrat.)

Cheney calling anyone “second rate” on national security is rich: This is the man who falsely claimed there were ties between Saddam Hussein and 9/11 and led the charge to convince the world Iraq had weapons of mass destruction, which it did not. He claimed the U.S. would be “greeted as liberators” in Iraq; instead we got bogged down in an unwinnable war. His chief of staff Scooter Libby was sentenced to 30 months in prison for his role in outing CIA operative Valerie Plame. (Bush commuted his sentence.)

It’s fascinating that Cheney came out of his hiding place the same week President Bush had his email hacked and copies of the president’s intriguing self-portraits circulated on the Web. While Bush’s art suggests a man engaged in some introspection – some folks have wondered if the portraits of him in the bath and shower suggest an attempt to cleanse himself of his worst decisions as president – Cheney just keeps spewing hatred. Even his new, taxpayer-funded heart can’t change him.

During the 2008 campaign Obama liked to joke that genealogists had found that Cheney was a distant cousin on his mother’s side. Obama expressed wry disappointment, confiding that he’d hoped he’d find he was related to someone famous he admired, only to learn of the Cheney connection. But maybe Cheney’s doing his cousin a good turn by reminding us that there’s distance between his national security policies and the previous administration. Chuck Hagel and John Kerry certainly would never serve in a Bush-Cheney administration. Luckily for the country, those days are behind us.

Update: The New York Times's Brian Stelter just Tweeted that CBS has a "big exclusive" with Cheney that will be aired Tuesday. (He'll repeat his claim that Obama picked Hagel so that a Republican will be blamed for doing "serious, serious damage to our military capabilities." Stelter is generally a good reporter, but I'm not sure why he's breathlessly hailing a Charlie Rose interview with Cheney as big media news: Cheney is a jobless former vice president who's been wrong about everything, and who has criticized Obama since before he became president. That he's still hailed as a newsmaker tells us only bad things about the news industry.