Fascism mounts a comeback in Italy 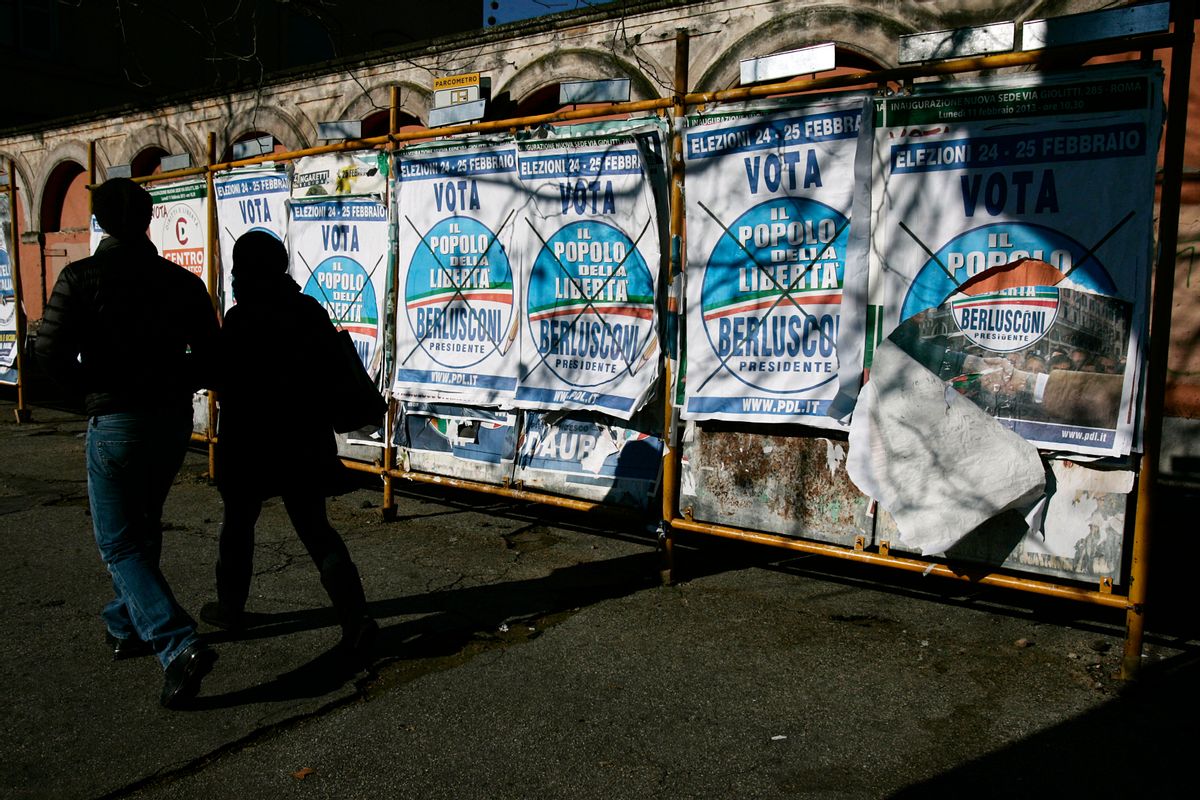 ROME, Italy — Its hard to avoid Benito Mussolini in Italy these days.

Pull into a gas station in rural Umbria and the black-shirted dictator glares down from the labels of special-edition wine bottles; browse souvenir shops in Basilicata and there's a phalanx of fake-marble busts of the bald-headed Duce; hunt through Roman antique stores and its easy to uncover hoards of Mussolini memorabilia.

Adolf Hitler's Italian henchman is enjoying a revival, 68 years after he was shot by resistance fighters and strung up in a Milan piazza.

Mussolini has always had a loyal following among the far-right fringe in post-War War II Italy. But now, even many ordinary Italians are defending the father of Fascism as a good leader with sound social policies and a knack for making trains run on time. Later, they say, he was led astray by Hitler and pressured to imposing the anti-Jewish 1938 Laws for the Defense of the Race.

"The racial laws were the worst fault of Mussolini, who in so many other ways did well," former Prime Minister Silvio Berlusconi said at service on Jan. 27 to remember the 7,500 Italian Jews killed in the Holocaust.

The remarks were met with outrage from Jewish leaders and opponents in the campaign for Italy's general election on Feb. 24-25. But they appear to have done Berlusconi no harm in the polls. An average of opinion surveys posted last week puts his right-wing coalition in second place in the election race with 29.4 percent, slightly higher than his Jan 25 score.

Historian Christopher Duggan says the rehabilitation of Mussolini began in the 1990s, when the fall of the Soviet Union undermined the Italian Communist Party as a major force in Italian politics.

"As the Communist Party collapsed, it allowed the center-right and in particular Berlusconi in the 90s to go on the attack, and to attack not just the former-Communists, but with them their ideology of anti-Fascism," said Duggan, a professor of Modern Italian History atEngland's University of Reading.

"Anti-Fascism, a founding pillar of the republic, was increasingly discredited by the center-right. This allowed for a reappraisal of the Resistance, the Second World War and more generally of Fascism," he added.

Italy did not undergo a systematic purge of Fascists similar to the de-Nazification campaign that the allies imposed on Germany after World War II.

Although laws were passed in the 1950s to outlaw open support for Fascism, a neo-Fascist party known as the Italian Social Movement, or MSI, was formed shortly after the war and rose to become the country's fourth largest party through the 1970s and 1980s.

Berlusconi's governments in the 1990s and 2000s included several ex-MSI members as ministers.

His former foreign minister, Gianfranco Fini, has since disavowed his 1994 declaration that "Mussolini was the greatest statesman of the century" and moved to the political center. His Future and Freedom party, however, includes among its election candidates Edda Negri Mussolini.

"I'm proud of my grandfather," she told the daily Corriere della Sera recently. He made "monstrous errors," she acknowledged, "but he did many good things."

Another of the dictator's granddaughters, former Playboy model Alessandra Mussolini, is running for re-election on the ticket of Berlusconi's People of Freedom Party. She stormed out of a TV debate last week calling journalist Andrea Scanzi a "dickhead" after he told her had no respect for Il Duce.

Italy's economic woes are adding to the nostalgia for the Fascist era. Growth has stagnated for a decade, and 2013 is set to be the second straight year of recession. Unemployment is now higher than 11 percent with more than one-third of Italians under 25 out of work. The crisis has fueled disaffection with mainstream politicians of all stripes.

Duggan says there's a degree of collective amnesia over the darker side of the Blackshirt era.

"People forget the bigger picture," he told GlobalPost. "Mussolini suppressed freedom, brutally suppressed opponents, clamped down on all rights and had racial laws which were quite central to the ideology of Fascism, not imposed from outside."

Berlusconi's praise for Mussolini was widely seen as an attempt to draw votes from a plethora of small parties on the more radical right.

Other election contenders have reached out to the neo-Fascists. Anti-establishment comedian Beppe Grillo, who is running for prime minister and scores about 15 percent in polls, recently told members of the Fascist-inspired CasaPound organization that some of their ideas could be shared and that they'd be welcome to join his movement.

Named after the American poet Erza Pound, who spent much of World War II making anti-semitic and anti-allied propaganda broadcasts for Mussolini's Radio Rome, CasaPound is one of several radical right-wing groups seeking to gain from the widespread dissatisfaction with established politics.

Divisions among the various far-right groups has weakened their influence. But some still see cause for concern, particularly if the economic situation deteriorates — a prospect many fear if the election results spook markets.

"What reassures me to a degree is that the various currents of the far right are fragmented,'' says Duggan, whose new history of Mussolini's Italy, entitled Fascist Voices, will publish this year.

"There is always the potential there," he added. "If things go badly wrong after the elections, if there is instability and a run on the markets. There's always the possibility that things might begin to coagulate."