Would Lincoln use drones?

Lincoln probably would have loved drones, but may have held off using them to kill for strategic reasons 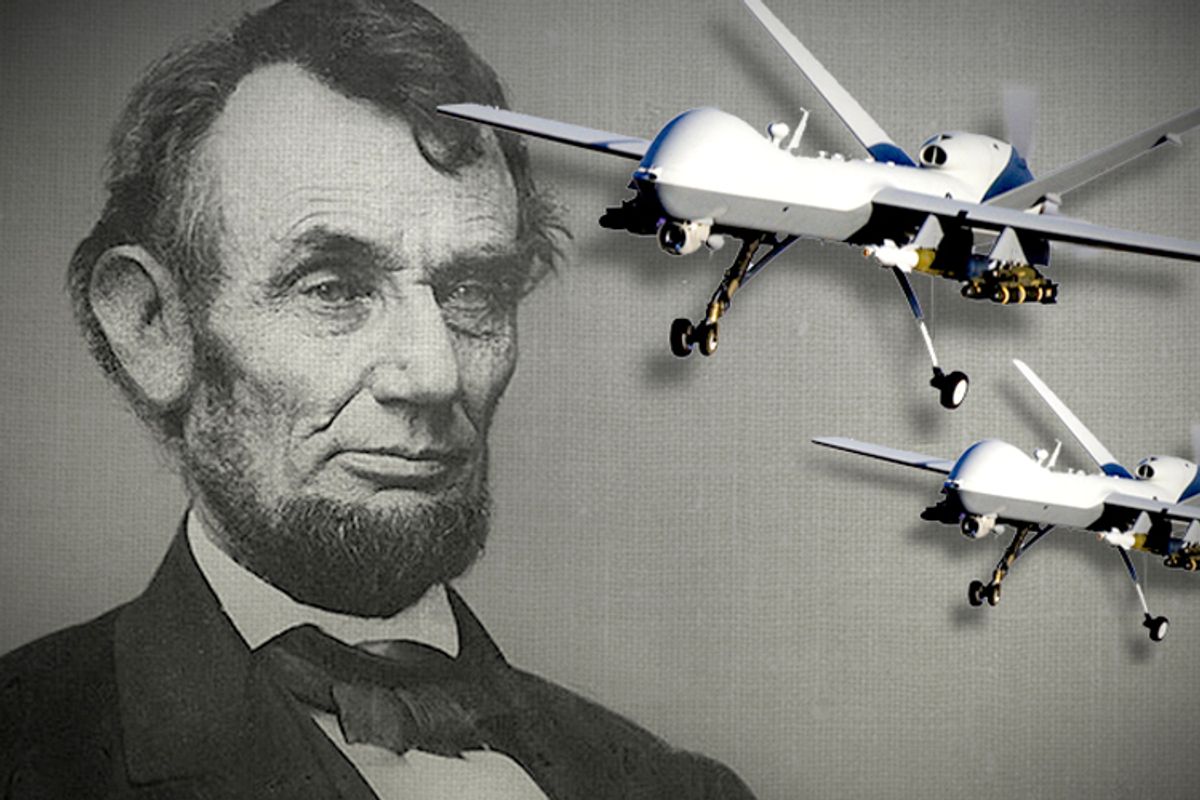 With the nation deep in the throes of Hollywood-induced Lincoln-philia, Washington Examiner editor Mark Tapscott asked Friday what the revered president might do about one of the thorniest political questions of 2013: “Would Lincoln have droned Robert E. Lee?” His answer -- an imagined conversation between Lincoln and Secretary of War Edwin Stanton that has the 16th president remarking “OMG” and “sheesh” -- is dumb, but the question and answer are more interesting that Tapscott gives them credit.

Lincoln is rightly held up as the paragon of the American presidency, so it makes sense that people would ask how he would handle a tough moral question like the use of unmanned killer drones, which has compelling arguments both for and against. WWLD? We consulted experts and the historical record to find out. The answer may surprise you.

First off, Lincoln was obsessed with military technology and innovation, so there’s little question that he would have been intrigued by drones, had they been invented in the 1860s. He often personally witnessed demonstrations of new inventions and pushed for their advancement and field testing through the War Department bureaucracy, in part by promoting officers who held a similar love of innovation. Under his tenure, the Union became one of the world’s first militaries to use repeating rifles (a vast improvement over the single-shot muzzle-loaders it replaced), rifled artillery, machine guns, rockets, armored “ironclad” warships, and torpedoes, and he made advanced strategic use of railroads and especially the telegraph.

He would have loved to have had drones’ surveillance power, as he championed the unprecedented use of balloons to spy on the enemy. When the aging head of the Army initially rejected the balloon idea, Lincoln personally marched inventor Thaddeus Lowe to the War Department and declared that he would be head of the new Aeronautics Corps for the Army.  “I have pleasure in sending you this first dispatch ever telegraphed from an aerial station and in acknowledging indebtedness to your encouragement for the opportunity of demonstrating the availability of the science of aeronautics in the military service of the country,” Lowe telegraphed to the president from a balloon over the National Mall.

But obviously drones did not exist in Lincoln’s day. So what about some kind of analogous technology that could safely kill enemies without a battle. Would Lincoln have been morally and legally comfortable with that?

We asked Yale Law School professor John Witt, who wrote a popular book about Lincoln’s code of war. As it turns out, Lincoln spent a lot of time thinking about these kinds of questions. On the eve of Emancipation, the president commissioned New York lawyer Francis Lieber to write the first modern code of war. The resulting guidelines (often called the Lieber Code) are more complicated that today’s left or right like to remember them, Witt argues, banning torture and poison gas on one hand, but also clearly designed to help the North win, on the other.

The code prohibited assassination, but what exactly counts as "assassination" is a debate that remains open to this day and started in antiquity. For instance, the Lieber Code was based on the thinking of 18th century Swiss philosopher Emmerich de Vattel, who laid the foundations for international law with his seminal treatises on the Law of Nations. In Volume III, he has a lengthy parsing of what it means to assassinate an enemy.

“Assassination is by all means to be distinguished from surprises, which are, doubtless, very allowable in war. Should a resolute soldier steal into the enemy's camp by night, should he penetrate to the general's tent, and stab him, in such conduct there is nothing contrary to the natural laws of war, nothing even but what is perfectly commendable,” Vattel wrote.

A true “assassination,” on the other hand, must involve treachery, Vattel wrote. Usually, this would be someone who deceives in order to gain access to his target, such as an “emissary, introducing himself as a supplicant, a refugee, a deserter.” That, Vattel wrote, “is infamous and execrable, both in him who executes and in him who commands it.”

Where, exactly, to draw the line in modern times is somewhat subjective. Opponents of drone strikes would argue that they are assassinations, while defenders of the practice would say they are more like a soldier sneaking into a general's tent to kill him. A 1989 Pentagon memo examined all relevant evidence and tried to settle on a definition of assassination once and for all, but ultimately laid down several, depending on circumstances.

So, WWLD? He had no problem bending the rules during the Civil War, suspending habeas corpus and other civil liberties, and issuing the Emancipation Proclamation knowing that it was likely illegal, as explained in the Hollywood film. Would he err on the side of expedience and say drone strikes are not assassinations?

“My own guess?” Witt told Salon. “The smart observation is that the aim of the Union war effort was to restore the Union, and I can't see how a drone assassination of Lee or Davis would do that. Much more likely to have been seen as an act of infamy and to have inflamed the South and set hearts and minds against the Union forever.  The code prohibits any act calculated to obstruct the restoration of the peace.  I'd put this in that category,” he explained.

“None of this is either here nor there for the use of drones in Afghanistan today, I'd say, since the strategic context is so radically different,” he quickly added.

Ultimately, determining what Lincoln would have done 150 years ago with drones is almost as open to debate as their use today.